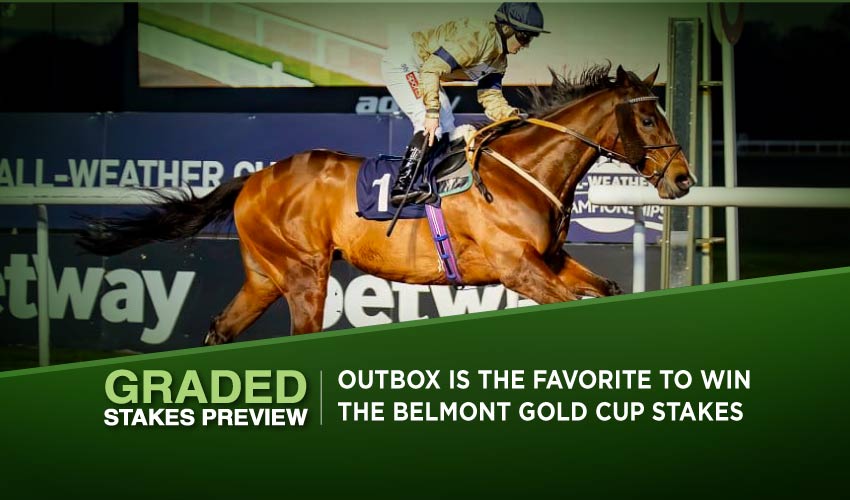 There’s an overseas presence on the undercard at Belmont Park on Friday, with horses from Britain and Germany well fancied to make the journey pay off in the marathon G2 Belmont Gold Cup Stakes, a two-mile stamina test ideal for European raiders. There’s much more speed on offer in the G2 True North Stakes, in which the dashing sprinter Jackie’s Warrior is a heavy favorite to embellish his fine record.

This is one of those races – a little like the Belmont Stakes itself – that demands from its participants’ qualities that are generally lacking in US racing, and so it is no surprise that the Belmont Gold Cup has been won by a European raider for the last four years.

There are two tourists bidding to stretch that sequence to five and, given the normality of such a marathon contest on the other side of the pond, it’s no wonder they are strongly fancied to do so. Four years ago the German-trained Red Cardinal was victorious and this year his compatriot, the progressive Loft (4-1), has all the attributes required.

German bloodstock is notably rich in stamina, and Loft proved his staying power when keeping on strongly to win the two-mile G2 Oleander-Rennen at Hoppegarten on fast ground on his first start of 2022. He will be sharper for that, has missed the board only once in seven starts, and is likely to have the scope for considerable improvement given the patient development typical to German route horses.

His fellow-traveler Outbox (2-1) is rated the better horse by some way back home, but the British runner is fully exposed and almost exclusively works the mile-and-a-half beat. He has decent form over further, such as when chasing home recent G1 winner Hukum in a G3 over a mile and three-quarters at York 11 months ago, but don’t be misled by his victory at the Saudi Cup meeting this year, which was in a ‘local G1’ that translates as barely a stakes race on a wider scale.

The best of the locals is easily Abaan (5-2), who won a stakes at this distance at Gulfstream Park in December and had the speed to be runner-up to the classy Gufo in the G2 Pan American over a mile and a half at the Miami circuit two starts ago, with ex-Brazilian Novo Sol (10-1) one place and two and three-quarter lengths behind. Abaan races on or near the pace and it’s possible he could get things his own way.

These three have a distinct class edge over the remainder of the field. Woodbine stakes-winner British Royalty (12-1) had a neck to spare over Cibolian (10-1) when they ran two-three in a Keeneland allowance over a mile and a half, and Cibolian gave the form a slight boost when fourth in the G3 Louisville at Churchill Downs at the same distance last time out, with Strong Tide (6-1) – a distant eighth in this race 12 months ago – 12th of the 14 runners.

Box N Score (15-1) makes his stakes debut and has never stretched out beyond the mile and three-eighths at which he won a Saratoga allowance last summer; it looks a tough spot for him.

This marathon distance is bread and butter to European raiders, and the improving LOFT is the choice to take this prize overseas for the fifth year running.

Several of the sport’s biggest names are strutting their stuff at Belmont Park this weekend, and as a result, some of the races are not as competitive as they might otherwise be. This goes for the True North, which merely serves as another opportunity for the brilliant Jackie’s Warrior (2-5) to showcase his enormous talent.

Jackie’s Warrior is fast, super-fast, and he doesn’t mess around with tactics that might obscure the nature of his speed. He breaks on top and he goes from the gate, early and sustained speed, a straightforward approach that has brought him four G1 wins (including one here) on a ten-for-14 resume, with the only blemishes on that record two disappointing defeats at the Breeders’ Cup.

He likely went a stride too fast when fading to finish sixth in last year’s BC Sprint, but normal service has been resumed on his two starts since. He was a cantering winner of the G3 Count Fleet Sprint at Oaklawn Park over six furlongs before stamping his class all over the G1 Churchill Downs in Louisville, eased down to win by four lengths over seven furlongs.

This intermediate distance should suit him perfectly and this represents class relief, not that he needs it, because when he’s in the groove he’s too hard to catch anyway.

Foremost among those charged with keeping tabs on him is Sound Money (9-2), who shaped well on his stakes debut when runner-up in the G3 Westchester here over a mile, showing plenty of early speed before coming home a clear second-best. He hasn’t cut back this short since before he won his maiden, though, and may not have the kick to cope with a blazing Jackie’s Warrior.

Former hype horse Baby Yoda (8-1) is back in Graded company, where on his last attempt he was run absolutely ragged by the majestic Flightline in the G1 Malibu at Santa Anita. Two recent wins in starter allowance sprints will have boosted his confidence and he deserves another try at this level.

Uriah St Lewis is never afraid to throw a Hail Mary at a big race – he does likewise in the G1 Met Mile here on Saturday – but War Tocsin (30-1) is zero-for-12 in stakes and his limitations have been consistently exposed. He showed willingness when third in the G3 Maryland Sprint at Pimlico, but was four and three-quarter lengths back at the line and this is tougher.

Stakes debutant Mr. Phil (5-1) and Night Time (12-1) both arrive in good order, the former on a three-race winning spree in an allowance optional claimers, the latest when gate-to-wire here over seven furlongs and the latter coming off an AOC score at Churchill Downs over five and a half. Both merit this move up and may interest exotics players.

This looks like a straightforward task for JACKIE’S WARRIOR, who probably won’t even need to be at his brilliant best to continue his winning streak.