BELMONT PARK RESULTS FROM THIS WEEKEND 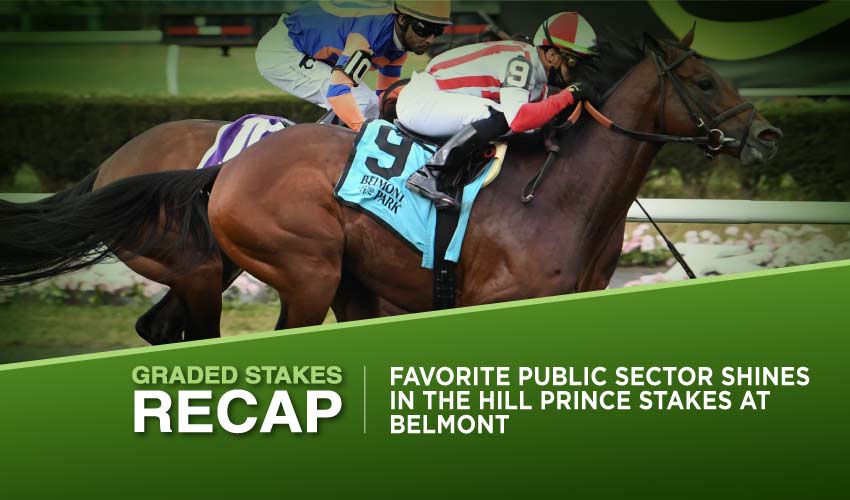 Brown is the color of the fall and trainer Chad was again the dominant figure at Belmont Park, winning yet another Saturday feature – the Grade 2 Hill Prince Stakes – with the up-and-coming three-year-old Public Sector. Brown couldn’t get the Graded-stakes double, though, with Florida raider Shifty She snapping up the Grade 3 Noble Damsel. Keep reading the Belmont Park Results for these two exciting races!

Brown again as Sector shines in the Hill Prince Stakes

It’s that man again. Chad Brown maintained his remarkable run of form when sending out Public Sector to win the feature Hill Prince at Belmont Park on Saturday, his ninth Graded-stakes win in October.

With the Breeders’ Cup on the horizon, there’s no better time to be firing on all cylinders, and Brown – who was reveling in his new nickname ‘Mr. October’ – is laying down a marker for the Del Mar festivities with every weekend that passes. Here it was the fast-improving Public Sector, who ran down long-time leader Never Surprised in late stretch to get the prize by a neck.

In a race in which the first three homes were the first three throughout, Public Sector ($8.60) sat several lengths off the even pace set by Never Surprised, who held a two-length advantage at the top of the lane. It was a question of whether there was time for Public Sector to reel in the rabbit, and he showed grit and talent in equal quantity to get the job done, stopping the clock in 1:48 and three-fifths. The longshot It Can Be Done was held on gamely for third.

“I had so much horse coming to the quarter pole,” said jockey Irad Ortiz. “I asked my horse a little bit, he gave me a turn of foot and I said I’m going to win, so let me bide my time. But then I realized the leader didn’t want to come back, so I said man, I’ve gotta go after him.”

The outcome was a repeat of last month’s Grade 3 Saranac at Saratoga, in which Public Sector outran Never Surprised by a length. Public Sector, who was winning for the first time at a mile-eighth, will now head for the Grade 1 Hollywood Derby at Del Mar at the end of November.

At a time when many are heading to Florida for a little late-year warmth, Shifty She made the reverse trip to collect the Noble Damsel on the Belmont undercard, posting her first success away from Gulfstream Park.

The Saffie Joseph-trained mare was certainly hot stuff here, landing her first Graded stakes when breaking fast and going gate to wire, coming home strongly through the stretch under Edwin Gonzalez to win by a length and a half in a time of 1:33 and one-fifth, paying off at $15.20. High Opinion came out of the pack to be runner-up, with Flower Point closing late for third.

Shifty She missed the whole of 2020 with a leg injury but has made up for lost time this year with three wins from six starts. Her next big target is the Grade 3 Pegasus Filly & Mare Turf back at her home track of Gulfstream in January.

Get a Daily Rebate and make sure to stay tuned for the latest horse racing odds, races results and racing entries.