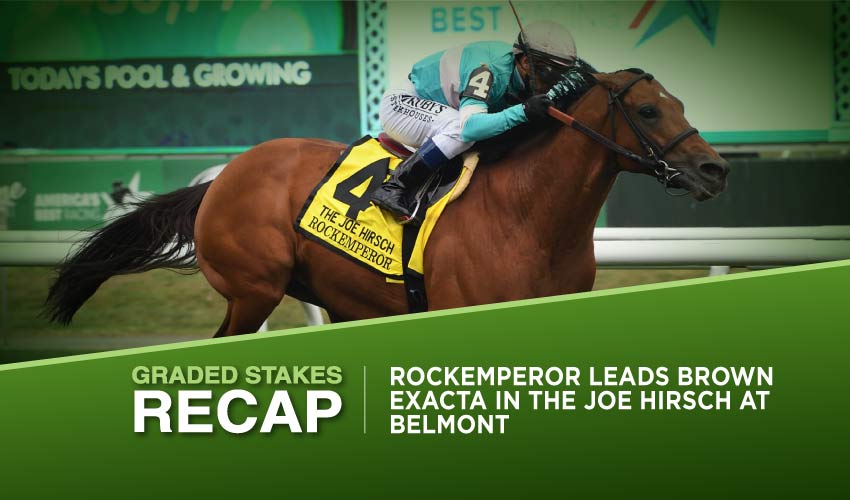 The Joe Hirsch Turf Classic at Belmont Park on Saturday gave us a reminder – if we needed one – that whatever we think we know, we always have something to learn. How else to explain the longshot victory of Rockemperor, who was winning his first Graded stakes and going straight in at Grade 1 level, a bullet to the top? The action didn’t let up all day on a thoroughly informative New York fall afternoon, with both Following Sea and Bubble Rock advertising their unlimited potential with impressive displays on the undercard.

It’s a well-known fact that Chad Brown is deadly in turf races, and he certainly plunged a dagger deep into the hearts of the betting fraternity when sending out 15-1 longshot Rockemperor for an upset victory in the Grade 1 Joe Hirsch at Belmont Park on Saturday.

Not only did Brown get the win, but he also supplied the exacta at boxcar odds with 14-1 barnmate Serve The King in a race that illustrated the inconsistency of the long-distance turf division, a division that is looking around vainly for a star. Rockemperor came to Belmont with one win in his last 14 starts, without a stakes win on his resume, but cleaned up that copybook with a determined performance that showed he was clearly the best horse on the day.

“It’s a different kind of satisfaction to come here, to a race we’ve won before, with two of the longest shots in the field,” Brown told the BloodHorse. “It’s different to be able to deliver unexpectedly.”

Different is one word for it. Astonishing is another. Rockemperor – who raced without blinkers after wearing them on his last four starts – sat some way off the leisurely fractions dealt out by 2018 and 2020 Joe Hirsch winner Channel Maker, and when the 9-5 favorite Gufo moved up to challenge as they entered the turn he was momentarily left in last place. Gufo’s effort proved short-lived, however, and suddenly there was Rockemperor coming five wide into the stretch before quickening clear and putting the race to bed in just a few strides.

Serve The King went in pursuit of the new leader but never posed a threat, and Rockemperor just kept going under Javier Castellano, hitting the wire two lengths clear, stopping the clock in 2:25 and three-fifths. Serve The King finished a length and a half ahead of third-placed Gufo, while Irish raider Japan was a never-at-the-races sixth. The exacta paid off at $89.25 for a dollar.

“He finished good,” said Castellano. “He’s the type that if you settle in the beginning, he’s going to give it back to you. The only problem with him in the past was he’s always been keen and he never finished.”

The drought is over

What a way to end that Graded-stakes drought, which encompassed a dozen races and stretched all the way back to the five-year-old’s days in his native France, where he was sixth in the Prix du Jockey-Club (French Derby) behind subsequent Prix de l’Arc de Triomphe winner Sottsass. On his previous start, Rockemperor had finished behind Gufo, Japan, and Cross Border in the Grade 1 Sword Dancer at Saratoga, and the straightforward way in which he flipped the form emphasizes the lack of a standout turf runner.

There are better horses in Europe than Japan, which is viewed on the other side of the pond as a second-division contender at the top level, there are horses such as Mishriff, Tarnawa, Love, and even Yibir, all of whom would be strongly fancied to win a Breeders’ Cup Turf. That’s the next stop for Rockemperor, who will be a longshot again at Del Mar on November 6 and could be accompanied by three of his barnmates, with Serve The King, Domestic Spending, and Tribhuvan all slated to represent Chad Brown in the big one. The future will look after itself, though. Saturday was all about Rockemperor.

“I’m so proud of the horse. He’s been a bridesmaid so many times,” added Brown, for whom this was a third win in the Joe Hirsch. “He’s one of the most deserving horses in our barn to win a Grade 1. He finally got it done.”

The son of Runhappy won at the Big Sandy in June over six and a half furlongs, but then couldn’t get competitive in the Haskell over a mile-eighth or the Allen Jerkens over seven furlongs. It wasn’t lack of ability, just lack of stamina. Once restored to the speedy six, Following Sea showed his approval by leading at every call, a sprinter doing what sprinters do best.

“Todd just told me to ride it the way it came up. He broke sharp and I asked him a little bit to get position,” said winning jockey Joel Rosario. “If somebody went, I would have sat second, but I decided to go to the lead. He ran really well.”

In a short field of four after the scratch of Jalen Journey, there was drama beforehand when the favorite Firenze Fire broke through the gate and had to be reloaded. On his previous outing Firenze Fire became famously infamous for savaging Yaupon during their stretch duel in the Forego, but this time he couldn’t get close enough to Following Sea to take a bite.

As the old phrase has it, Following Sea went to the front and just kept improving his position. He turned for home a length clear and drew off through the stretch to put four and three-quarter lengths between himself and the posse, stopping the clock in 1:09 and one-fifth, paying off at $7.00, earning a fees-paid berth in the Breeders’ Cup Sprint.

In a race in which the order remained unchanged from gate to wire, track specialist Firenze Fire held on to second place by two and a half lengths from the wiseguy horse Baby Yoda, who ran a huge Beyer figure on his previous start but couldn’t make the transition to this higher grade.

“He really took all the strategy out of play in the first 50 yards,” said Pletcher. “He broke great, put himself right on the front and it seemed like he was in hand throughout. When he made the lead that easily I was pretty confident.”

It was the first graded-stakes success for both Following Sea and his sire Runhappy, and the three-year-old will give Rosario a tactical headache in the run-up to the Breeders’ Cup Sprint, as the jockey has the mount on race favorite Jackie’s Warrior, who also figures to set the fractions.

On an afternoon that for the most part confounded pre-race expectations, Bubble Rock stuck to the script when justifying favoritism in the Matron Stakes at Belmont, in the process strengthening trainer Brad Cox’s hand as the Breeders’ Cup approaches.

Her task was made a little easier when three fillies were scratched from the Grade 3 contest, including the well-fancied Chi Town Lady, but the daughter of More Than Ready didn’t need the help given the comfortable nature of her victory, which was value for more than the official verdict of half a length.

Bubble Rock didn’t make her debut until mid-August, breaking her maiden on her second start when an easy winner at Saratoga. This was her third run in less than two months and she is heading up the ladder two rungs at a time.

“She’s nice. Last time she won and finished well, too,” said winning jockey Irad Ortiz. “I just did the same thing today. I waited for my time to go and when I asked her, she finished up really strong again.”

Bubble Rock ($5.00) was always in reach of the fractions set by Mystic Eyes, Ortiz putting her on an outside route clear of potential trouble, and she put her chips on the table at the top of the lane as Makin My Move split horses. She came under a drive to put those two rivals away and had the race in the bag inside the last sixteenth, covering the six furlongs in 1:08. The late rally of longshot Gal In A Rush, who was a long way back early, brought her the runner-up spot a half-length ahead of the gallant Mystic Eyes.

Follow us on Social Media for instant Belmont updates!