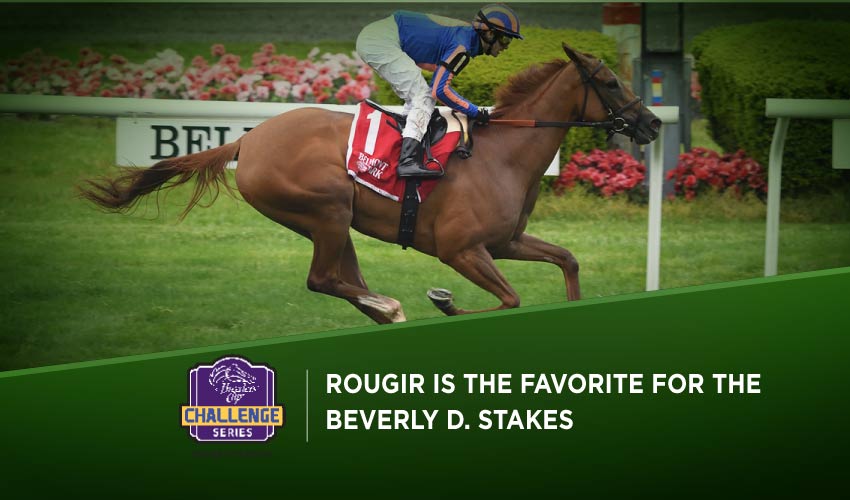 It’s a new start for the historic Arlington Million and the Beverly D Stakes, with both G1 contests finding a new home at Churchill Downs on Saturday. The Million offers a seven-figure purse and brings together turf stalwarts Smooth Like Strait, Santin and Set Piece, while Irish raider Lily Pond and G1 winner Rougir head a short but intriguing field for the Beverly D.

The Arlington Million is the centrepiece of a special one-day Churchill Downs meet on Saturday, but it’s not the old Arlington Million, just a race with the same name. Different distance, different track, no European raiders, none of the old glamour of what was once a great race, instead just a middling bunch of horses aiming for an unusually large purse.

It’s a competitive heat, though, with plenty in with a chance. The consistent but enormously frustrating Smooth Like Strait (5-2) is top of the morning-line after hitting the board in his last six starts without keeping his head in front. He’s a front-running miler stretching back out – he was runner-up in last year’s G2 Eddie Read at Del Mar at this distance – and the extra yardage might help, given that he’s always vulnerable to speedier types grabbing him late on.

He’s one of two G1 winners in the line-up, the other being Santin (3-1), who got that distinction in the Turf Classic over course and distance in May when pressing the pace and grinding it out to score by a neck, with Cavalry Charge (20-1) a long way back in eighth. The ten furlongs of the G1 Manhattan at Belmont Park last time didn’t suit Santin, and he’ll likely go a lot better with this cutback.

There’s a rematch between Megacity (15-1) and Field Pass (8-1) after they ran one-two in a mile-eighth stakes at Lone Star Park last month, separated by a neck. That would have been Megacity’s first win at stakes level, but his number was taken down for interference and the race awarded to Field Pass.

That marked a return to form for Field Pass, who had previously run third in the G3 Arlington here over a mile-sixteenth behind the fast-finishing Admission Office (10-1), beaten a head and a neck. Admission Office is two-for-four here and never off the board, but he’s generally inconsistent and was never in the game when last of five in a stakes at Belmont on his most recent start.

Chad Brown has won the Million a record four times and sends Sacred Life (9-2) to the gate off the back of his best performance of the year. The old-timer showed a good attitude when coming home late to win the G3 Monmouth over a mile-eighth at the New Jersey circuit and he’ll be suited by the likely fast pace of Smooth Like Strait, but over the course of a long career he has never won above G3 level.

Set Piece (4-1) has an excellent record here, going four-for-five including last year’s G2 Wise Dan over a mile-sixteenth, in which he had two lengths to spare over fourth-placed Field Pass. He never got competitive when fifth in the G3 Forbidden Apple over a mile at Saratoga last month, but will appreciate stretching out again and his effectiveness here puts him on any short-list.

Ten furlongs seemed too far for SANTIN last time out, but he is a G1 winner over this course and distance and looks ready to bounce back.

The Million’s supporting act, the Beverly D, has also had its distance cut and has drawn a short field, although at least there is a runner from Europe to lend the contest – a win-and-in for the Breeders’ Cup Filly & Mare Turf – a hint of transatlantic allure.

Since 2011 the race has either been won by Chad Brown or a European tourist. Brown is bidding for a seventh victory in the race and trusts the job to the French import Rougir (2-1), who needs to buck up her ideas after two flat efforts since she easily won the G3 Beaugay over a mile-sixteenth at Belmont Park in May.

It hasn’t all been Rougir’s fault, as the filly needs a little give in the ground and wasn’t suited by the firm conditions when off the board in the G1 New York and the G1 Diana, the latter over course and distance when she at least finished seven lengths ahead of the toiling longshot Dalika (8-1), who has never won above G3 level. The ground was heavy at Longchamp when Rougir made her G1 breakthrough, and unless it rains at the Spa she may again be at a disadvantage.

The European angle comes via Lily Pond (5-2), whose trainer Aidan O’Brien won the Beverly D last year with the ill-fated Santa Barbara. Lily Pond, the only three-year-old in the race and thus getting a 5lb pull from all her rivals, posted a career-best last time when cut back five furlongs to today’s distance and winning the G2 Kilboy Estate at the Curragh, although no-one would pretend it was a high-class contest.

She will need a lot more today, but is certainly on the upgrade and – unlike many Irish shippers – won’t mind the fast turf underfoot.

Princess Grace (3-1) isn’t in the same scintillating form as she was at this time last year, but snapped a three-race losing streak when wiring the mile-sixteenth G3 Dr James Penny Memorial at Parx Racing last month, although it wasn’t a strong race and she lacks the basic class of the morning-line favorite.

That might once have been said about Family Way (3-1), but not since she was runner-up in the aforementioned ten-furlong G1 New York at Belmont in June, a length and a half ahead of Rougir in fifth. However, the possibility of a modest pace raises doubts given she’s cutting back from what is probably her best distance.

There are concerns about her dislike for firm turf, but ROUGIR is the class horse here and is the choice to overcome the underfoot conditions.