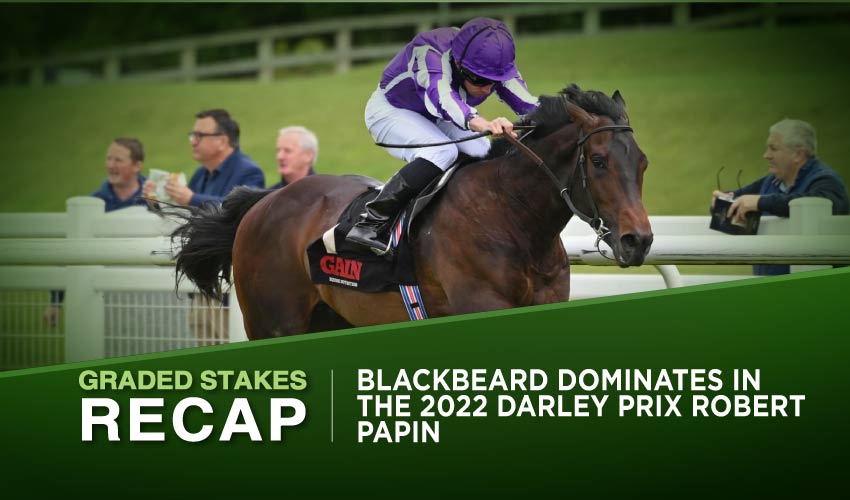 Sunday’s card at the French Racecourse in Chantilly featured three Graded races, including the G2 Darley Prix Robert Papin for two-year-old colts and fillies. Aidan O’Brien had been waiting for success in this treasured event for some time, and finally, the Irish trainer not only celebrated a victory thanks to Blackbeard but also a one-two result as The Antarctic came home in second. The G3 Prix Chloe saw a victory of Tariyana among fillies, while Wally prevailed in the G3 Prix Messidor.

The pinnacle of Sunday’s card was open to two-year-old colts and fillies who clash at the distance of six furlongs. In this G2 turf race, six contestants fought for the purse of €130,000, with Blackbeard (6-5) fulfilling the role of a favorite here.

Piloted by Ioritz Mendizabal, the Aidan O’Brien bound colt performed his usual theatrics prior to the race, but once he left the gates, he settled in second, waited for the cue, and subsequently took command. Blackbeard then quickly scooted clear from his rivals to score by three lengths in 1m 8.31s, while his stable mate The Antarctic (68-10) came home in second. Vicious Harry (78-10) secured third place for Spain as the locals were disappointing here.

The victorious son of No Nay Never has already six outings under his belt, as after bagging a G3 race easily, he couldn’t repeat it at the G2 stage. He was defeated at the Royal Ascot, then finished second in Curragh, but on Sunday, he was just superb, and in terms of sprint races, Blackbeard might add another big win to his record in the months to come.

The Antarctic showed a fine finish to take second place in front of Spanish raider Vicious Harry who left the leading French chance, Belbek (17-10), in fourth.

Three-year-old fillies lined up in this G3 turf race over a mile and a furlong, vying for the purse of €80,000. In the end, it was Tariyana (17-10) who started off as the favorite in the field of five participants, while Stephane Pasquier sent her to the lead right away.

Galloping at the front, the Francis-Henri Graffard trained chestnut remained first until the final stretch, where a couple of her rivals tried to close on her. However, Tariyana didn’t allow them to threaten her in the slightest and crossed the wire in 1m 48.85s and with a comfortable advantage of one and ½ of a length. Sippinsoda (19-10) took second place before Daisy Maisy (2-1).

The beautifully bred Tariyana entered the race with just a maiden victory and a second place at the Listed stage as last time out, she finished only eighth in the French Oaks, beaten even by Daisy Maisy. However, the daughter of Sea The Stars looked quite ready to earn at least some G3 glory, which she affirmed on Sunday by her bold front-running performance.

In the final stretch, nobody was really getting much close to her as Sippinsoda only narrowly managed to secure second place when leaving Daisy Maisy in third. The rest of the field was no match for the mentioned trio.

Three-year-old and older horses then clashed in this G3 turf race, offering the purse of €80,000. The field of seven contestants covered the distance of a mile, while preferred Wally (9-10) managed to record his third G3 victory.

Cristian Demuro let his gallop in second and urged him to take the lead in the final stretch. However, the Jean-Claude Rouget gelding seemed a bit lazy as Longvillers (42-10) regained the command briefly, and Axdavali (43- 5) threatened the outside. Still, Wally needed just a small reminder to better them, put half a length between him and Longvillers, and scored the race in 1m 39.37s. Longvillers had to settle for second place in front of Axdavali.

Although Wally spent the initial years of his career in smaller races, his second attempt at the Listed stage resulted in a fine victory in 2021, upon which he climbed up the levels to achieve two G3 wins and a G2 success in Italy.

In 2022, the son of Siyouni caught the eye, especially in the G1 Prix d’Ispahan, where he relied on his great turn of foot and secured a brilliant second place back then, thanks to which he was the clear leading chance on Sunday. Indeed, Longvillers and Axdavali challenged him in the closing stages; still, Wally is a runner who doesn’t win by far as he always delivers only what he needs to.