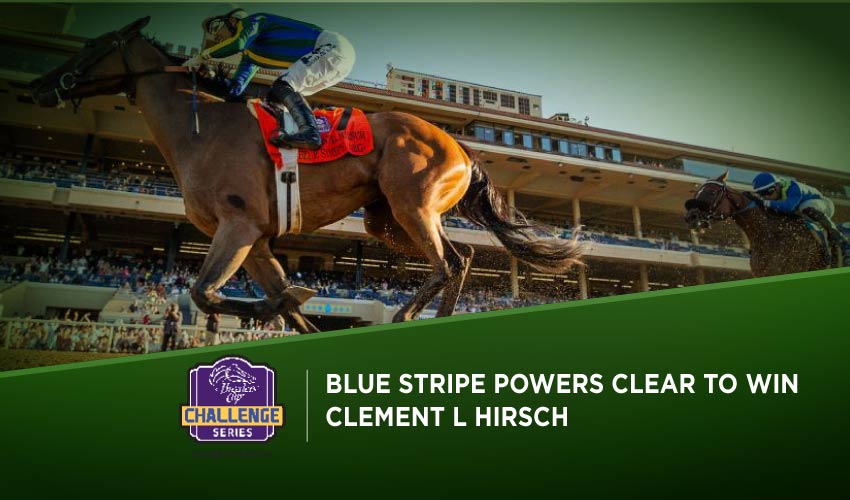 The G3 La Jolla, the feature on a sunny Sunday at Del Mar, provided the stage for the recently gelded Cabo Spirit to make his breakthrough at Graded level, while 24 hours earlier the ex-Argentinian mare Blue Stripe had posted her first G1 success in the US when running out an impressive winner of the G1 Clement L Hirsch.

Taking something unnecessary away can often mean something essential is added, and Cabo Spirit confirmed that point when making his Graded-stakes breakthrough in the La Jolla, the main event at Del Mar on Sunday.

Cabo Spirit had been gelded since his previous start and the procedure had the desired effect, giving the versatile Cabo Spirit a new lease of life. The 5-2 second-choice went from last to first, producing an irresistible stretch run to first catch the front-running Armagnac and the favourite Sumter, and then turn back the rail run of longshot Perfect Flight to win by a half-length, stopping the clock in 1:42 and one-fifth. Sumter held on to the show spot, three-quarters of a length further back.

“It took a game horse to do that,” said winning jockey Joe Bravo. “The last eighth of a mile was all willpower.”

The son of Pioneerof The Nile is effective on turf, dirt and synthetics, and was ending a losing streak of four in Graded company. Trainer George Papaprodromou will now point Cabo Spirit to the G2 Del Mar Derby, over a mile-eighth on turf, on September 3.

The five-year-old, the 5-1 third-choice, sat in behind the pace set by Private Mission and odds-on favourite Shedaresthedevil until Hector Berrios asked her to move up around the turn. Blue Stripe put her nose in front at the top of the lane and quickly took command, keeping on strongly through the stretch to win by a length and three-quarters from the rallying Desert Dawn, who beat out Shedaresthedevil for the place spot by a head. The time was a tick under 1:43.

“The race went exactly as we planned it,” said Berrios. “We wanted to sit behind the speed horses, then go get them late. She can run further, too. I think she wants to do that.”

Blue Stripe, trained by Marcelo Polanco, is now six-for-ten lifetime with the G2 Santa Margarita at Santa Anita also on her roll of honour since her move north. Her main target is now the G1 Breeders’ Cup Distaff over a mile-eighth at Keeneland on November 5, having secured a free berth following this win-and-you’re in performance. If successful, she would be keeping the race in the family, as her half-sister Blue Prize won the BC Distaff at Santa Anita in 2019.