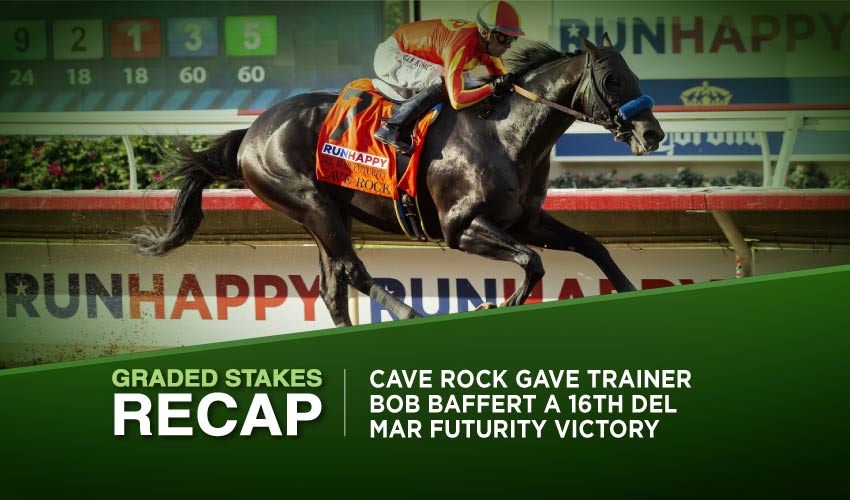 It was farewell to summer at Del Mar on Sunday, the oceanside track closing out its meet with the marquee G1 Del Mar Futurity, won in sizzling style by the unbeaten Cave Rock. The supporting feature, the G3 Juvenile Turf, was won in a similar wide-margin fashion by the improving Packs A Wahlop.

Rock rolls to an impressive win

The final day at Del Mar’s summer meet gave us a horse to think about through the fall and maybe into next spring, as Cave Rock produced a devastating display to win the Futurity and give trainer Bob Baffert an incredible 16th victory in the race.

The 2-5 favorite took control of the race straight out of the gate, breaking smartly and soon setting swift fractions ahead of barn mate Havnameltdown, racing for the same owners, the pair traveling one-two throughout. Cave Rock opened up a gap with an eighth to run and just kept widening it all the way to the wire, coming home five and a quarter lengths clear of second-choice Havnameltdown, who had four and a quarter lengths to spare over Skinner in third. The time was a stakes record 1:20.99.

“I tried to slow him down some but he wasn’t having it, so I just let him go on and do his thing,” said meet-leading jockey Juan Hernandez. “When I asked him, he changed leads and took off. He wanted to go. He has a big future. He’s something.”

Something special, perhaps. Cave Rock, a son of Arrogate – also the sire of Saturday’s Debutante winner And Tell Me Nolies, and becoming a huge loss to the breeding industry after his death at the sorrowfully young age of seven – is now unbeaten in two and will naturally be a leading contender for the G1 Breeders’ Cup Juvenile at Keeneland on November 4.

It looked a very difficult race to deal with on paper but Packs A Wahlop made it look easy on the track, cruising to victory in the Del Mar Juvenile Turf as trainer Jeff Mullins signed for the trifecta.

The 8-1 sixth-choice pressed front-runner Ah Jeez until moving to the lead around the turn and clearing right away under ‘Big Money’ Mike Smith, extending his advantage to four and a quarter lengths by the time he hit the wire, stopping the clock in a tick under 1:36.

Don’tthinkjustdoit crossed the line in second but was disqualified for causing interference and demoted to seventh. The winner’s bandmates, longshot Valiancer and the favorite Dandy Man Shines, were upgraded to second and third respectively.

“He’s a talented colt and he did it very handily,” said Smith, at 57 well into the twilight of his career but still performing with brio on the big stage.

This victory gave Packs A Wahlop a two-for-three resume following his sprint maiden win on his previous start, and pushed the grey colt into contention for the G1 Breeders’ Cup Juvenile Turf at Keeneland on November 4.

Follow us on Social Media for more Cave Rock updates!