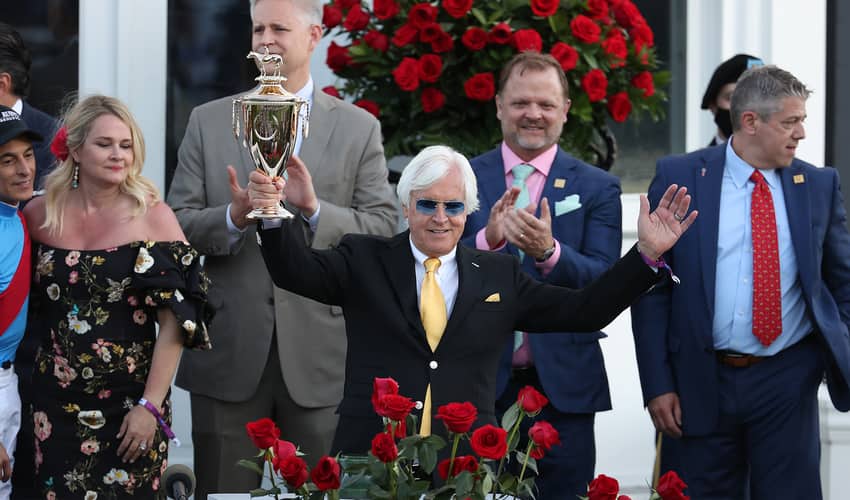 Bob Baffert’s Violations: For the next couple of weeks; we will have a deep dive into the Hall of Fame trainers and their achievements on the track. It seemed that there would be no more fitting place to start with the man that has been dominating the headlines for the past couple of months- Bob Baffert.

The race that is most synonymous with Baffert and his horses is the Kentucky Derby. No trainer has achieved more wins in the opening Triple Crown race than the American; and his first notable runner in the race came back in 1996 when Cavonnier finished second. Success in the race was soon to follow; as he got his first win in the Kentucky Derby with Silver Charm. The three-year-old went on to win the Preakness Stakes, too, before finishing second in the Belmont Stakes. Further success at Churchill Downs would follow; as he would train Real Quiet to victory in 1998 before War Emblem added further success in 2002.

His most dominant period in the history of the race has come between 2015 and 2021, as he has recorded four wins in the seven renewals. His most recent success came this year with Medina Spirit. He has also won the Preakness Stakes seven times. Belmont Stakes victories have been harder for Baffert, as he has won that race on just three occasions.

It’s hard to talk about Baffert and his incredible record in the Triple Crown races without mentioning the feats of the two horses that were trained by him that won all three races. American Pharoah was the first to achieve the feat that many considered to be impossible. As the three-year-old lined up for the Kentucky Derby in 2015, it had been 37 years since a horse had won all three of the famous races. It was the dominance of his wins that really took fans back. He would win the Kentucky Derby by a length before winning the Preakness by seven lengths and the Belmont Stakes by five and a half.

A second horse was quick to follow in the footsteps of the American Pharoah, as Justify would replicate the feat just three years later. Unlike Baffert’s first record-breaker, Justify would retire from the track without suffering a single defeat. He wrapped up the Triple Crown with a length and three-quarter victory in the Belmont Stakes. However, there was controversy surrounding his victory further down the line.

Controversy has continued to follow Baffert throughout his career, and just a year after Justify’s win, it was reported that the three-year-old had failed a drug test following the Santa Anita Derby. However, the California Horse Racing Board dismissed the case.

It is getting increasingly difficult to move past the violations that Baffert is stacking up. As of May this year, he has trained 31 horses that have failed a drug test, with four of those horses coming last year. Two horses that failed drug tests in 2020 saw Baffert banned by the state of Arkansas for 15 days. Once again, Baffert was caught up in a storm following the Kentucky Derby, as Medina Spirit failed a test following his Triple Crown victory.

There was no hiding after this violation, with Sports Illustrated claiming that the situation has now reached a ‘saturation point.’ Baffert was subsequently suspended by the NYRA, and he will not have any runners in the upcoming Belmont Stakes. What happens next is anyone’s guess, but the racing community is calling for serious action to finally be taken against a trainer whose violations are stacking up.

Make sure to check Horse Racing Tote for all the latest horse news, racetrack entries, horse racing results, horse betting odds and so much more.