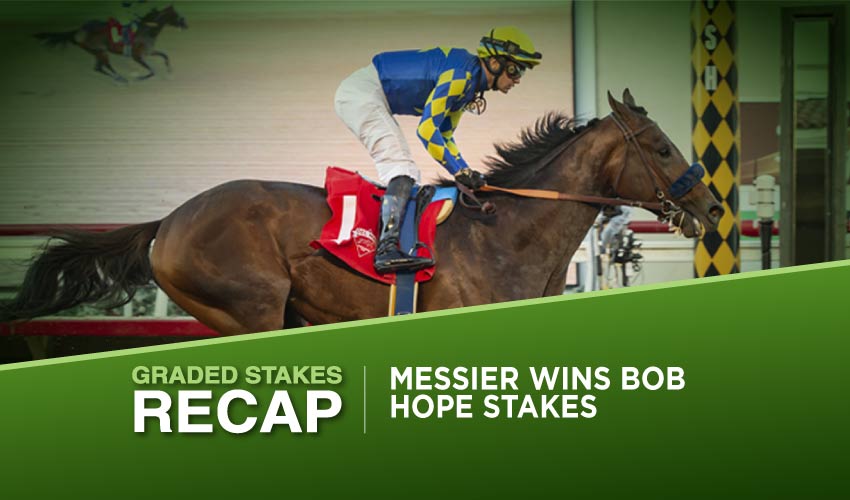 Bob Baffert saddled five of the nine runners in the weekend’s feature races at Del Mar and made those numbers count, adding to his stellar record at the seaside circuit through the dominant victories of Messier in the Bob Hope Stakes and the filly Eda in the Desi Arnaz Stakes.

It was hard to see Bob Baffert missing out in the Bob Hope Stakes at Del Mar on Sunday given that he trained three-quarters of the four-runner field, and in the end it was the 6-5 favorite Messier who took him into the winner’s circle.

This was an easy score for the son of Empire Maker, who sat last of the quartet through the first half-mile as the free-running Forbidden Kingdom set brisk fractions. Messier moved up around the turn and joined issue at the top of the lane as the fast pace began to tell on Forbidden Kingdom, and then quickly went to the lead, clearing away under a hand-ride from Flavien Prat.

Messier hit the wire three and a half lengths clear and stopped the clock in 1:22 and four-fifths. Forbidden Kingdom dug in and held on for second, a length and three-quarters ahead of Winning Map.

“There was plenty of pace in the race and that was to our advantage,” said Prat. “When I asked, he was there, and I think this horse will be fine with going further.”

Baffert – winning his 11th edition of the Bob Hope Stakes – drew favorable comparisons between Messier and his Breeders’ Cup Juvenile winner Corniche, but at present thoughts of the Kentucky Derby are groundless given Baffert’s suspension from Churchill Downs. Messier, who is now two-for-three, will head next for the Grade 2 Los Alamitos Futurity at the California circuit over a mile-sixteenth on December 18.

It had already been a successful weekend for Baffert, who cleaned up in Saturday’s highlight when the speedy Eda ran the opposition out of town in the five-runner Desi Arnaz.

The race went according to the script, with the 1-5 favourite sitting at the girth of front-running stablemate Under The Stars until putting her head in front as they exited the turn. Tonito’s loomed up as a threat on the outside, but Eda swiftly put that challenge away and quickened clear through the stretch to win by a thoroughly dominant four and a quarter lengths, covering the distance in 1:15 and one-half. Tonito’s kept hold of second, three-quarters of a length ahead of Under The Stars.

This was the second stakes victory for the daughter of Munnings, who is now three-for-five with a second place in the Grade 2 Sorrento also on her resume. She has plenty of pace and will now bid to stretch that out to a mile-sixteenth in the Grade 1 Starlet at Los Alamitos on December 4.

“Flavien thought this was the best race she has run,” said Baffert. “I loved the way she was able to relax and then kick away clear. Flavien doesn’t say much, but he was really impressed with her.”