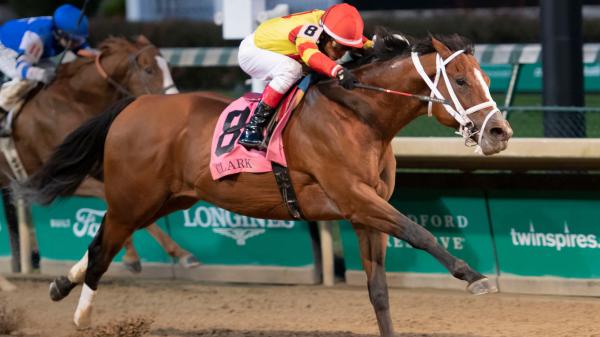 Fan favorite Bodexpress (Bodemeister–Pied a Terre, by City Zip), recent winner of the GI Clark H. at Churchill Downs Track Nov. 27, has been retired after suffering an undisclosed; career-ending injury in the race, according to a tweet late Sunday from trainer and part-owner Gustavo Delgado.

“With great regret, we announce the retirement of Bodexpress,” the tweet read. “He suffered a career-ending injury while winning the G1 Clark Handicap. A very talented colt, who finally showed his potential at CD. Thank you Bode for the journey & memories. To his fans, Thank you for your support!!!”

Before we continue on with the latest news, take a look at some of the hottest horses betting odds currently available at JazzSports.ag

The retirement of the 4-year-old Bodemeister colt brings to a close one of the more unusual careers in recent memory.

Bodexpress caught the public’s eye when he entered last year’s Triple Crown races as a maiden; winless in his first five starts in South Florida. However, he earned his place in the national conversation following a surprising runner-up finish behind Maximum Security in the Grade 1 Florida Derby.

The colt was one of the horses impeded by Maximum Security’s erratic trip in the Kentucky Derby, where he finished 13th.

Then, he gained cult hero status in the Preakness Stakes after tossing rider John Velazquez at the gate and going around the track in the race riderless; with additional antics after the field had crossed the wire.

Those two wins returned Bodexpress to stakes competition; where he finished third in the G3 Harlan’s Holiday Stakes, and fifth in this year’s G1 Pegasus World Cup Invitational Stakes.

Bodexpress remained winless in 2020 heading into October, but a class drop into the allowance optional claiming ranks at Gulfstream Park West yielded a 11 1/4-length confidence boost. Ten days ago; he finished his on-track career with an 11-1 upset victory by a length; in the G1 Clark Stakes at Churchill Downs.

In total, Bodexpress finished his racing career with four wins in 17 starts for earnings of $694,600.

Bred in Kentucky by Martha Jane Mulholland, Bodexpress is out of the unraced City Zip mare Pied a Terre. The dam is a half-sister to Grade 2 winner Stormy Lord.

Give an EDGE to your horse betting with the help of Horse Racing Tote expert racing advice.