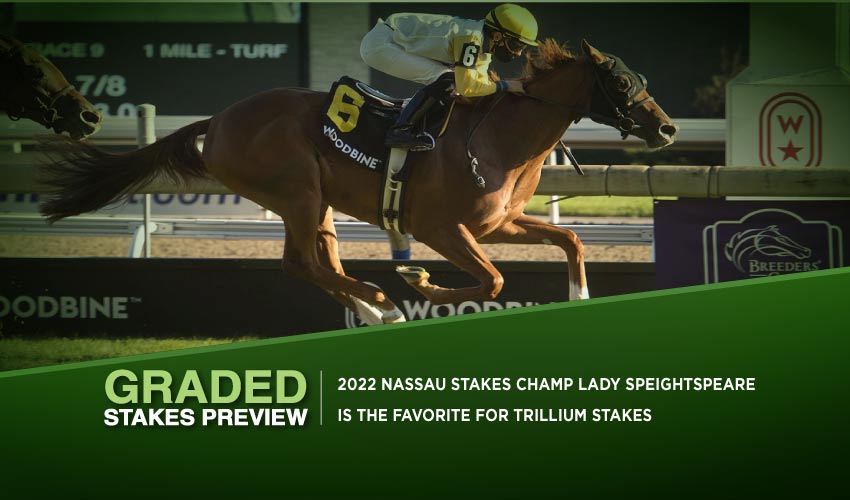 On Saturday, there are two G3 races on the all-weather surface held at the Woodbine Track, Canada. At first, three-year-old and older fillies and mares will clash in the Trillium Stakes, where Lady Speightspeare could achieve another Graded success. In the G3 Bold Venture Stakes, Mark Casse relies on a couple of reliable performers, Tap It To Win and Souper Stonehenge, to strike gold

A large field of fifteen horses aimed at this G3 race run on the all-weather surface while vying for the $150,000. Tap It To Win (3-1) is the mild favourite of this six and half furlong long event as the five-year-old bay is quite a reliable runner at the Graded scene.

In 2021, he bagged the G3 Seagram Cup Stakes and then earned some money at the same or higher level. In the ongoing season, Tap It To Win snatched up two-second places – in a black-type race and then in the G3 Jacques Cartier Stakes. Back then, he was just second best behind the progressive winner; however, he couldn’t entirely keep up with the field in the G2 Highlander Stakes in July.

A drop in the class should help him, and because he enjoyed the distance, the Mark Casse bound ridgling is a victory candidate. In Jacques Cartier Stakes, Souper Stonehenge (4-1) finished third behind his stable-mate, which was a good start of the season for him, yet subsequently, he was only sixth in a Listed.

Still, he amassed some very respectable results throughout his career as he was third in the G1 Cartier Handicap and bagged two G3 victories in 2021, but he just needs to remember his form from the past season to strike gold on Saturday. Mark Casse also relies on Helium (10-1), the eighth in the Kentucky Derby 2021, who looks like a proper Listed colt.

After placing at the black-type scene, the son of Ironicus finished second in the Listed Michael G. Schaefer Memorial; however, it’s a question of how he’ll fare at such a short distance.

Wesley Ward sends in four-year-old Outadore (6-1) with only seven outings under his belt. The gelding took third place in the G1 Breeders’ Cup Juvenile Turf in 2020 and scored his only two starts of 2021. He succeeded at the black-type and Listed scene, while in 2022, he’s been out just once when finishing second at the Listed level.

He might not be ready to score a G3 race; still, there’s something about him. The last to mention is Avia’s Flatter (8-1), a multiple G2 winners who failed to make an impact in his seasonal debut by running in ninth in an Allowance race.

Tap It To Win as the field is competitive, but the bay is reliable and proved to be capable of scoring among such a company.

This G3 all-weather race is open to three-year-old fillies and older mares who will cover the distance of a mile and half a furlong. The purse of $150,000 attracted a field of thirteen participants, including Lady Speightspeare (5-2).

The Roger Attfield bound filly scored the G1 Natalma Stakes in 2020, and despite the fact that she hasn’t repeated such a result yet, she’s become a decent Graded performer. In seasons 2021 and 2022, the daughter of Speightstown bagged two G2 victories, while the second one happened in July. Back then, the reliable chestnut dug deep to prevail in the Nassau Stakes, and because she scratched in her supposed following start, she still has a chance to draw on that effort and achieve another Graded triumph.

Four-year-old Hazelbrook (15-1) tasted how the Graded success feels in July for the first time as the Lorne Richard’s trainee delivered in the G3 Hendrie Stakes over six and half a furlong. The daughter of Bayern has six starts under her belt, with four victories to her record, while she looks like a promising and progressive filly.

Still, she’s about to hit such a distance for the first time as she’s been showing up among sprinters until now. Although Dreaming of Drew (4-1) finished only seventh in the G2 Nassau Stakes, she’s placed at the Graded scene and scored a Listed.

Therefore, she could snatch up a fine place here together with Lady Lucerne (6-1), a promising mare who is yet to win at the Graded stage. Lovely Ride (8-1) is another Listed victress from 2021, while in 2022, she’s placed twice at the black-type scene.

Lady Speightspeare due to her solid results is the Graded company.