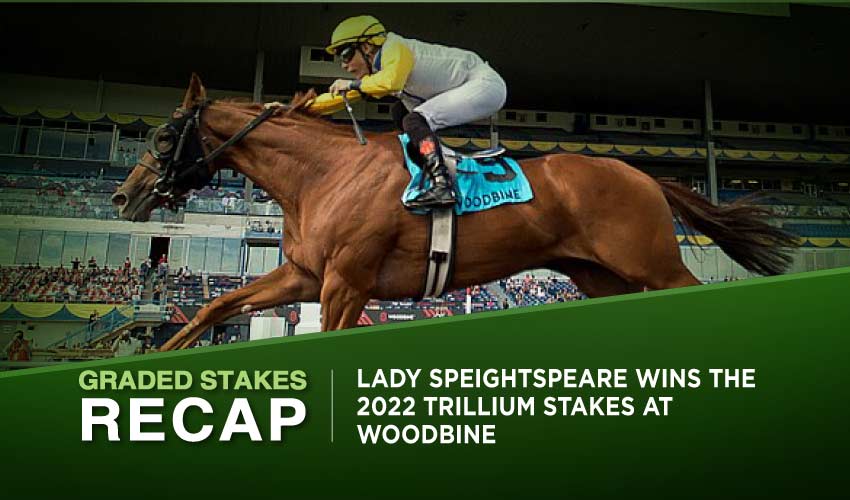 The previous weekend offered three G3 races at the Canadian Race Course in Woodbine. On Saturday, fillies and mares showed up in the Trillium Stakes, where Lady Speightspeare showed off her class by running down her rivals to score another Graded win. Later on, Secret Reserve caused an upset when delivering in the Bold Venture Stakes, while Sunday’s Seagram Cup Stakes also witnessed a surprise. In other words, underestimated War Bomber landed the spoils when favorites had no luck.

Twelve three-year-old and older fillies and mares lined up for this a mile and half a furlong long G3 race offering the purse of $150,000. On the all-weather track, Lady Speightspeare (21-20) picked up the role of a favorite, which she fulfilled finely. Under Emma-Jayne Wilson, the four-year-old chestnut settled in fourth on the outside and improved her position in the final turn, upon which she attacked leading Dreaming of Drew (7-2). The bay filly put up a short fight before succumbing to Lady Speightspeare, who scored comfortably by one and ¼ of a length. Crossing the wire in 1m 45.75s, she left Dreaming of Drew in second, with Kate’s Kingdom (23-1) securing third place.

The victorious filly is trained by Roger Attfield, for whom she delivered a G1 win in the past, and drew on her triumph in the G2 Nassau Stakes from July; moreover, she’s still capable of placing among the elite. Therefore, her class should’ve really shown on Saturday, which happened, and the second Dreaming of Drew simply was no match for her. However, she delivered a good run, too, leaving the rest of the field behind decisively, including third Kate’s Kingdom, who lost to the second filly by three lengths.

After anticipated runners Clayton and Tap It To Win scratched, thirteen three-year-old and older horses clashed in this $150,000 G3 race over the distance of six and half a furlong. Hitting the all-weather surface, the leaders set too fast a tempo that none of them sustained; therefore, their rivals galloping in the pack run them easily down in the final stretch, especially Secret Reserve (104-10). The Michael Mattine bound four-year-old traveled in fifth at the fence and faced a minor room issue later on, but Eswan Flores aboard managed to successfully navigate his mount forward. Once the bay had some space in front of him, he bolted up, denied other finishing horses, and scored the race in 1m 16.19s. By half a length, the victor left behind Candy Overload (107-10), flying on the outside, while third Avie’s Flutter (58-10) lost to him just by a head.

Although Secret Reserve has displayed some ability, he wasn’t really expected to deliver such a bold run after his only Graded performance resulted in seventh place. In fact, his 2021 form was quite promising as the Giant Gizmo gelding bagged two black-type wins, but in 2022, he grabbed only third place at that stage and the mentioned seventh place. He achieved his premiere Graded triumph in the Bold Venture Stakes and might have finally regained his last year’s gusto when bravely fending off both Candy Overload and Avie’s Flutter.

On Sunday, the program at the Woodbine Race Course continued with this G3 event on the all-weather surface where War Bomber (182-10) caught his rivals off guard. The four-year-old gelding covered the distance of a mile and half a furlong from the front to seize most of the purse of $150,000 by ¾ of a length. Piloted by Sahin Civaci, he got a great start, quickly charged for the lead, and even though Clayton (705-100) challenged him in the final turn, War Bomber managed to scoot clear subsequently. In the end, Artie’s Storm (51-10) considerably diminished his lead but couldn’t get past the victor who crossed the wire in 1m 43.26s. Clayton was third.

The race was entirely unfortunate for the favorite as the Norman McKnight bound War Bomber was simply the best on Sunday when securing his first Graded victory. Up to this point, the son of War Front scored only at the Listed stage and didn’t even place among the better competition, yet the Seagram Cup Stakes went right into his stride, and War Bomber could show not only his class but also how gutsy he can be. Thanks to his attitude, he was able to hold off both Clayton and then Artie’s Storm, who finished third and second respectively, bettering even preferred Frosted Over (6-4), who was basically invisible throughout the race. He had to settle for fourth place, while last year’s winner, Tap It To Win (79-20), was disappointing when finishing last of all.