Boppy O Strikes Gold in the With Anticipation Stakes 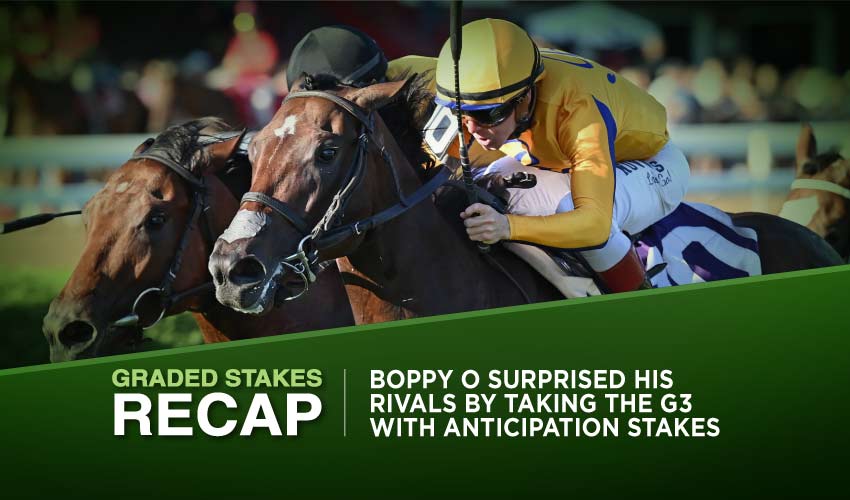 The G3 With Anticipation Stakes was the peak of the Wednesday card at the Saratoga Race Course. It was open to two-year-olds, among which outsider Boppy O caused an upset by denying both Battle of Normandy and Andthewinneris.

Quite a surprise prepared Boppy O (231-10) to his rivals in this G3 turf race as he caught them off guard with his very brave effort. The purse of $175,000 attracted a field of seven two-year-olds who covered the distance of a mile and half a furlong here while Boppy O settled in second.

Under Dylan Davis, he attacked the leading colt in the final turn, upon which he faced a charge from Andthewinneris (9-4). In the end, the Mark Casse bound Boppy O dug deep to keep his rival at bay and triumphed in 1m 46.93s. Andthewinneris didn’t hold to the second place as Battle of Normandy (12-5) seized it, losing to the winner just by a neck.

Boppy O, the son of Bolt d’Oro, entered the With Anticipation Picture with two starts under his belt as he was successful in his debut; however, his premiere at the G3 scene resulted in tenth place. Therefore, he wasn’t really expected to strike gold on Wednesday, moreover, when facing the anticipated duo Battle of Normandy – Andthewinneris.

The former was quite unlucky in his trip as he had nowhere to go in the final stretch, and when he finally got himself some room to rally, he closed considerably on the victor. Still, he had to settle for second place in front of weakening Andthewinneris.

Follow us on Social Media for more With Anticipation Stakes updates!