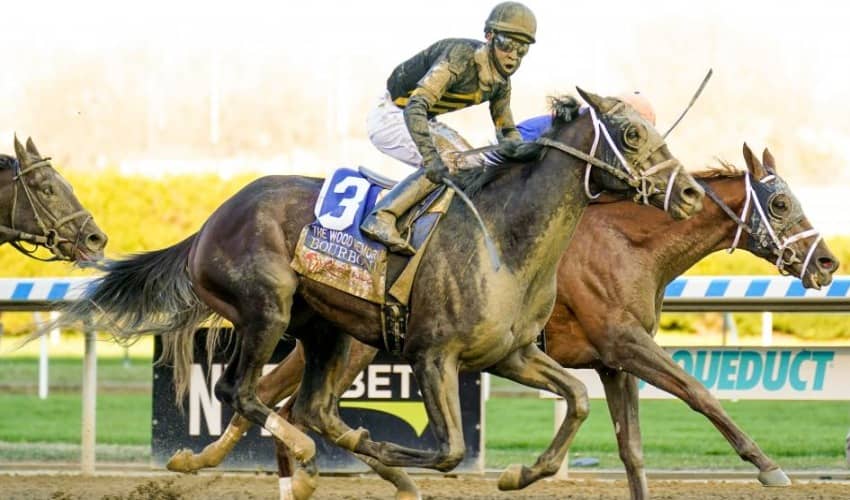 It was a good Saturday for Bourbonic, who put together a shocking win at the 2021 Wood Memorial Stakes.

The Wood Memorial Stakes is one of the big races on the road to the Kentucky Derby, with 11 winners of the Grade 2 going on to win the first of the Triple Crown events between 1930 and 2000.

That success hasn’t continued since the turn of the millennium. With no future Kentucky Derby winners claiming victories in the Wood Memorial Stakes. This year’s winner of the Grade 2 on Friday was a massive 72/1 outsider, but his price has already dropped massively for success in the KD.

Bourbonic lined up for the start of the Wood Memorial Stakes at a massive price and was given virtually no chance of victory. He managed, however, to upset the 72/1 long odds next to his name on the toteboard, and claimed success by a head from Dynamic One in the $750,000 Wood.

It was the first win of the season for the 3-year-old, and it couldn’t have come at a more important stage of the campaign.

The Todd Pletcher-trained horse has dropped to as low as 12/1 (+1200) for the Triple Crown race next month, and on this form, he could be a live contender.

Kendrick Carmouche gave the three-year-old an excellent ride to claim the win, and he responded well when put under pressure by Dynamic One down the final furlong.

It was a Pletcher 1-2 in the race, but nobody could have foreseen the order that they finished in.

The success was even more staggering when you consider that Bourbonic finished a distant 15 lengths behind Speaker’s Corner on his first start at Belmont Park in October last year. This performance came from nowhere, but it has certainly led gamblers to second guess where their money is going for the Kentucky Derby.

Bourbonic Could Have Big Run At Churchill Downs

Bourbonic‘s bloodline would certainly suggest that the 3-year-old could be set for a big challenge at the Triple Crown events this year. He is related to Afleet Alex, who finished third in the “run for the roses” in 2005 before winning the Preakness and Belmont Stakes later in the year.

History does suggest that this at least gives Bourbonic a chance. But he will be coming up against some excellent competition at the beginning of May.

Risk Taking started the 2021 Wood Memorial Stakes as the clear favorite, but he finished a distant seventh in the contest. There was also money around in the market for Weyburn and Prevalence. But neither could get anywhere near the eventual winner.

Punters would have been most concerned by the lack of drive in the final furlong by Prevalence, who finished 5 1/4 lengths behind the winner.

Essential Quality remains the clear favorite for the Kentucky Derby this year. That’s after winning the Toyota Blue Grass Stakes this past weekend.

Follow us on Social Media for instant horse racing updates.