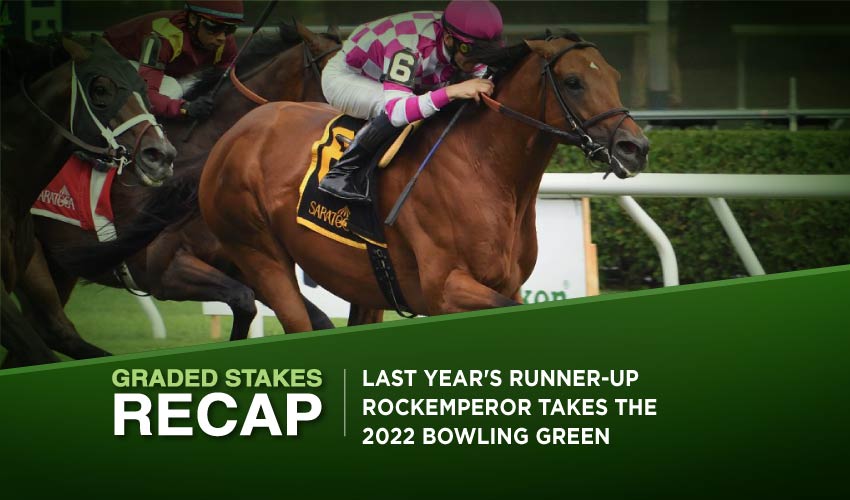 Sunday’s card at the Saratoga Racecourse offered a field of G2 races. Turf specialists clashed in the Bowling Green over a mile and three furlongs, where six-year-old Rockemperor landed the spoils in front of Arklow.

Later on, Corniche’s return to the track resulted in the last place in the G2 Amsterdam Stakes as the three-year-old colt weakened quite early, unlike Gunite, who caught off guard more preferred rivals and even boosted the form Steven Asmussen’s runner have been sporting recently.

The G2 turf race for four-year-old and older horses attracted a field of five contestants, who covered the distance of a mile and three furlongs. Vying for the purse of $250,000, Rockemperor (49-20) started off as the favourite here, and under Flavien Prat, he spent the race in fourth place.

The Chad Brown bound bay waited until the final stretch, where he crept closer to leading L’Imperator (9-2), and once he got before him, he just went for the victory. The six-year-old horse crossed the wire in 2m 15.81s, with Arklow (61-20) delivering a late finish to grab second place, half a length behind the victor. L’Imperator, a stable mate of Rockemperor, had to settle for third.

Before the event, Rockemperor was the second or third chance of the Bowling Green ; however, his odds plummeted. In the end, the son of Holy Roman Emperor was anticipated to score the race after finishing second in 2021.

Moreover, he’s a G1 winner, so the only question marks surrounding him were connected to his form, as his most recent outings didn’t pique much interest. Still, he was once again brilliant on Sunday, bettering eight-year-old veteran Arklow decisively. Behind third L’Imperator, Highland Chief (13-5) managed only fourth place in a lacklustre effort.

The G2 dirt race was held over the distance of six and a half furlongs, with nine three-year-olds competing for the purse of $200,000. The event had its favorite in Corniche (33-20), yet he showed nothing here, and it was Gunite (74-10) who struck gold for Steven Asmussen.

Piloted by Tyler Gaffalione, the son of Gun Runner galloped close to the leader, took command in the final stretch, and then had to fight for the triumph with strongly finishing Accretive (59-20)

Gunite prevailed in a thriller by a neck, coming home in 1m 15.75s, but both colts delivered great runs as none of the rest of the field closed on them. Outsider Runninsonofagun (56-1) snatched up third place.

Gunite was a respected contestant here as he bagged the G1 Hopeful Stakes in 2021, but both his 2022 outings happened among the lesser competition as the bay finished second in an Allowance race and scored a Listed.

On Sunday, he returned to the Graded company with a bang, showing off his gutsy nature when denying Accretive, running just the second race of his life. The Chad Brown bound colt looks quite promising.

In terms of Corniche, he, indeed, hasn’t hit the track since November, but not many people probably expected him to flop so enormously. He got bumped after the start but then got into some rhythm, yet soon enough was clear he was not ready to take on such a company.

Although he looked good when training, he failed to show anything of it on Sunday, and he raised some doubts whether he’ll be ever able to return to the form with which he scored the Breeders’ Cup Juvenile in 2021.

Follow us on Social Media for more Saratoga updates!