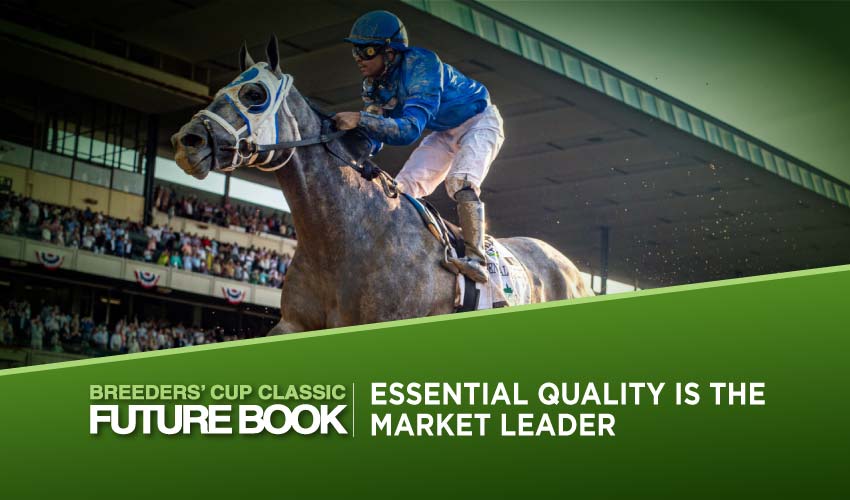 In some years, the 2022 Breeders’ Cup Classic features a standout performer, a true champion in waiting. In others, the field is deep and competitive, with several contenders for the crown. This year belongs in the second category, although at the time of writing there are three horses who look set to dominate the conversation up until post-time.

The market leader is last year’s champion two-year-old Essential Quality (+500), who runs in the royal blue of the all-conquering Godolphin team. Twelve months ago he won the Breeders’ Cup Juvenile, and in 2021 he has built solidly on this youthful promise. He has only been beaten once in his life, when fourth behind Medina Spirit in the Kentucky Derby, and subsequent victories in the Grade 1 Belmont and Grade 1 Travers stamp him as leader of his generation.

The grey Tapit colt is a confirmed stayer, is tactically versatile, is unflashy in respect of only ever doing enough to win, such as when turning back Midnight Bourbon in the Travers at Saratoga last time. Essential Quality was in front a furlong and a half out and Midnight Bourbon kept nagging at him all the way to the wire without ever looking like going past. Of all the major contenders for the Breeders’ Cup Classic, Essential Quality is the least complicated, the one who will run his race no matter what. He is top-class and the one to beat.

His main market rival is the five-year-old Knicks Go (+550), last year’s Breeders’ Cup Dirt Mile winner, who is a one-dimensional front-runner but absolutely brilliant at that discipline. Put Knicks Go on the pace and he’s practically unbeatable, as he demonstrated in the Grade 1 Whitney at Saratoga when running his rivals ragged. A gorgeous grey son of Paynter, Knicks Go is six-for-eight since the start of 2020, his only defeats coming in the Saudi Cup when he couldn’t lead, and in the Met Mile, both one-turn contests.

Over two turns, Knicks Go has been unstoppable. Yet he has never gone ten furlongs, and there are other pace factors here who will try to unsettle him on the lead. His chance is a binary one: if he can stretch out his speed while sitting pretty on the pace, he’ll probably win, if he can’t, he definitely won’t.

Max is a player

One who will push the fractions is Max Player (+1000), who has shown considerable improvement since being sent forward in his races. He beat Mystic Guide in the Grade 2 Suburban and then tore it up in the Grade 1 Jockey Club Gold Cup at Saratoga, kicking right away to beat Happy Saver by four lengths.

That form isn’t as good as that shown by the market leaders, but Max Player is going places thanks to that change of tactics and he could well step up again. Happy Saver (+2000) was behind the reinvented Max Player in both Suburban and Jockey Club Gold Cup and there is little encouragement that he can turn the tables.

The British ace Mishriff (+1500) is an unlikely runner, having other targets to aim at, and the Irish colt Bolshoi Ballet (+2000) is a very unlikely participant, but Life Is Good (+1500) would be a very interesting addition to the field.

The Into Mischief colt was an early favorite for the Kentucky Derby, but was sidelined and only returned to action at Saratoga last month when he was narrowly foiled in the seven-furlong Grade 1 Allen Jerkens. He’s a natural front-runner, sure to tangle up with Knicks Go and compromise that horse’s chance, but the Dirt Mile is his main objective, with the Kelso Handicap over a mile at Belmont on Saturday as a prep.

The outcome of the Grade 1 Pennsylvania Derby at Parx Racing on Saturday will likely have a big impact on the Breeder’s Cup Classic future’s book, with Medina Spirit, Hot Rod Charlie, and Midnight Bourbon in opposition. If you like one of these for the Classic, bet now, as victory will see the odds tumble.

Everyone knows about Medina Spirit (+1700), the Kentucky Derby winner who tested positive for betamethasone. After finishing third in the Preakness he had three and a half months off the track before returning with victory in a Listed event at Del Mar, and obviously – given a strong run at Parx – would be right in the mix for the Classic.

However, there is a big question over whether trainer Bob Baffert will be permitted to enter horses for the Breeders’ Cup, and even if he does run Medina Spirit, through no fault of his own, will be an unpopular guest at the feast.

Hot Rod Charlie (+1500) hit the wire in front in the Grade 1 Haskell at Monmouth Park in July but was disqualified for interfering with Midnight Bourbon, who came down in mid-stretch. He was earlier third in the Kentucky Derby and runner-up in the Belmont, but the problem with this colt is his record – he’s two-for-ten lifetime, he’s not a natural winner.

That also goes for Midnight Bourbon (+3000), two-for-11 lifetime, the Travers, Preakness, and Louisiana Derby runner-up. These two game colts are fine candidates to hit the board but make no appeal as potential Classic winners.

Maxfield (+1700) is a solid Grade 2 horse whose only defeats have come in Grade 1 company, most recently behind Knicks Go in the Whitney. Godolphin’s second string lacks the class for this marquee contest. Local hero Tripoli (+3000) won the Grade 1 Pacific Classic over course and distance, but the form doesn’t patch in with the rest of this field and he will need to step up a fair way to be in contention.

Get a Daily Rebate and make sure to stay tuned for the latest Breeders Cup Odds, and racing entries.