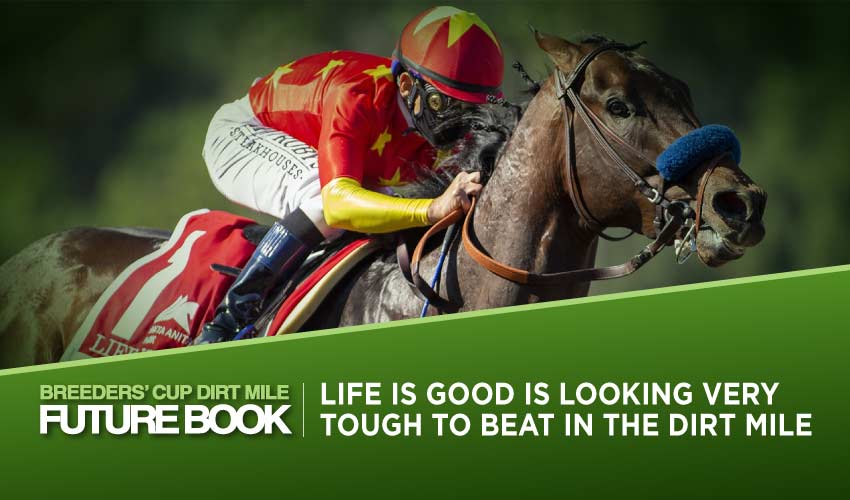 The 2021 Breeders Cup Dirt Mile goes under the microscope as the countdown continues towards the multi-million-dollar Breeders Cup at Del Mar on the first weekend of November, the world championships of horse racing,

The Dirt Mile is one of the newer races at the Breeders’ Cup, and suffers in relation to the more prestigious alternatives available in the Classic and the Sprint, which both draw competition away from the Dirt Mile.

This year there is a heavy favourite in the shape of Life Is Good (+150), who was favourite for the Kentucky Derby earlier this year after beating Medina Spirit in both the Grade 3 Sham and the Grade 2 San Felipe at Santa Anita, but was then sidelined with injury.

He came back as good as before, and would probably have won the Grade 1 Allen Jerkens at Saratoga if jockey Mike Smith had been more forceful, and then did win the Grade 2 Kelso at Belmont Park when hosing a weak, short field. He went gate-to-wire there, as he did in the San Felipe and the Sham, as he did when winning his maiden here last year. He’s four-for-five lifetime, acts well at Del Mar, and has a running style designed to place pressure on horses who don’t possess his quality. He deserves to be the hot favourite.

His main market rival is Silver State (+700), who hit a rich vein of form when winning six straight between October 2020 and May 2021, culminating in a battling victory in the Grade 1 Met Mile at Belmont Park. Two subsequent defeats have not diminished his record greatly – he was third in the Grade 1 Whitney at Saratoga when stretching out to a mile-eighth, and was then runner-up in a stakes at Parx Racing when running a curious race.

He was well behind early, looped the field to hit the front, and then got collared in the last few jumps and beaten a head by Mind Control. Given a more conventional route he would probably have won, and he was also spotting the winner 4lb.

Mind Control (+2500) is a barnmate of Life Is Good and has usually come up short at the top level, while he has done most of his running at seven furlongs, the distance at which he won the Grade 2 John Nerud at Belmont Park in July. He got the job done at this distance at Parx, but given the unconventional nature of the runner-up’s route the form shouldn’t be taken as gospel, although his tenacious attitude will stand him in good stead.

West-coast campaigner Eight Rings (+1000) was riding a six-race losing streak until stopping the rot in an allowance optional claimer at Santa Anita this month, leading at every call. It was a poor race and on that bare form he has next to no chance at this level, but he was runner-up to crack sprinter Dr Schivel in the Grade 1 Bing Crosby here over six furlongs in July, and won a Grade 1 here at a mile-sixteenth in his two-year-old days.

Plainsman (+1000) had been making it pay in very minor stakes company this year and wasn’t even on the map for this race until winning the Grade 3 Ack Ack over a mile at Churchill Downs last time out, keeping on gamely to beat Beau Liam (+1500) by a length. The runner-up appeals more as a sprinter and it’s questionable what Plainsman achieved under the twin spires, but he does come here in form after winning four of his last five.

That was Beau Liam’s first defeat in four races, but his successes in two allowance contests over shorter distances at Saratoga don’t suggest that he can be a big player in Grade 1 company at a mile just yet.

Another local hero is Ginobili (+1800), who is three-for-five where the surf meets the turf including his breakthrough success in the Grade 2 Pat O’Brien in August over seven furlongs, when Eight Rings was back in fourth. Before that he posted an allowance win over course and distance, and the refitting of blinkers seems to be responsible for the uptick in his form. He has never won away from Del Mar, so with the headgear fitted he should be taken seriously by those looking to get away from the favourite.

Fulsome (+2000) is five-for-eight in 2021 and was a comfortable winner of the Grade 3 Smarty Jones over a mile-sixteenth at Parx Racing two starts ago, and at the same venue then did as well as could be expected when a never-nearer fourth behind Hot Rod Charlie in the Grade 1 Pennsylvania Derby. He stays further than this mile and will be assisted by the likely strong pace.

Last year’s Dirt Mile runner-up Jesus’ Team (+1700) has been beaten in all four starts in 2021, although the first two defeats came at Grade 1 level, including when runner-up in the Pegasus World Cup at Gulfstream Park, his home track. The winner Knicks Go aside, it was not a particularly strong race. He was stone last in a stakes at Saratoga in August, and it’s hard to consider him for this despite his performance at last year’s world championships.

The mile might be an issue for Drain The Clock (+2000), who has shown all his best at seven furlongs, including when taking advantage of a slow-starting Jackie’s Warrior in the Grade 1 Woody Stephens at Belmont Park in June. He was beaten by the ‘Warrior’ on his next two starts and this doesn’t look the right spot for him.

Dirt and turf come alike to Snapper Sinclair (+2500), a barnmate of Silver State, who left his charge too late when beaten half a length in the Grade 2 Eddie D at Santa Anita last time out. That was over six and a half furlongs on turf, but he has good form at a mile on dirt too, notably when fourth in the Group 2 Godolphin Mile at Meydan in March.

There is not a great deal of strength in depth in the Dirt Mile, with the hot favourite Life Is Good looking very tough to beat. Del Mar specialist GINOBILI to show may be the best alternative at more rewarding odds.

Get a Daily Rebate and make sure to stay tuned for the latest Breeders Cup Racing odds, Horse Betting Tips and racing entries.