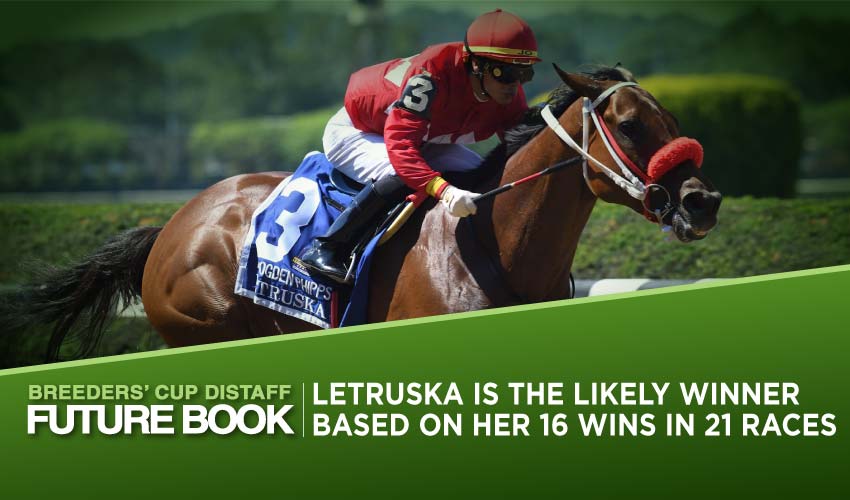 The Breeders Cup is coming to Del Mar Nov 5th and 6th and we bring you the Distaff Future Book update. One of the Breeders’ Cup originals from back in 1984, the Distaff has been won by some of the all-time greats of the game including Lady’s Secret, Personal Ensign, Bayakoa, Zenyatta, Beholder and Monomoy Girl. This year’s renewal, as usual, breaks down into a clash of the generations, with an outstanding older mare taking on a top-class three-year-old filly.

The future book favorite is the marvelous Letruska , who is 16-for-21 lifetime and unbeaten in her last four starts, three of them Grade 1s. Her only defeat of 2021 came when she couldn’t lead – when she is on the lead she seems impossible to beat.

Last time out she wired the Grade 1 Personal Ensign at Saratoga, setting quick fractions and keeping on strongly off that brisk pace to turn back all the late challengers, including runner-up Bonny South, of whom more later. Letruska might be happier at a mile-sixteenth, but that run at the Spa proved her stamina for the Distaff distance and if she can control the pace she’s good enough to win this – but that’s quite a big ‘if’.

Her main challenger on form is the three-year-old Malathaat , the undisputed queen of the sophomores who has been beaten only once in seven starts, and that by just a head after being caught up in a speed duel in an off-kilter four-runner Grade 1 Coaching Club American Oaks at Saratoga. She put that right next time in the Grade 1 Alabama, back at the Spa, when saving her speed for the stretch run and coming through to win comfortably from Clairiere.

She won the Grade 1 Kentucky Oaks at this distance but stays further, and as long as she doesn’t get compromised by chasing the pace she will be coming for Letruska late and strong. If not for poor luck she would be unbeaten and she is likely still improving.

Private Mission is coming through at the right time for this, and staked her claim when outrunning her stablemate As Time Goes By in the Grade 2 Zenyatta at Santa Anita last week. She looked strong there, taking the race by the scruff of the neck after half a mile and rolling to a comfortable victory. She was an easy winner of the Grade 3 Torrey Pines over the Del Mar mile in August and is certainly ready for this step up in grade, and after just five starts has plenty of scope to improve.

If the Breeders’ Cup were at Churchill Downs then Shedaresthedevil would be a very strong contender given her five-for-five record under the twin spires, including last year’s Kentucky Oaks and the Grade 1 La Troienne in April. She also has course form at Del Mar, winning the Grade 1 Clement Hirsch in August, with As Time Goes By a well-beaten fourth. Tactically versatile, she can set the pace or sit behind it, although her best performances have come when she’s free on the lead.

She couldn’t be there when third behind Letruska and Bonny South in the Grade 1 Ogden Phipps at Belmont in June, and to have her best shot in the Distaff she might have to lead, and that’s not so likely.

Is there a hex?

Bonny South (+1000), a barn mate of Shedaresthedevil, has finished runner-up in three Grade 1s and never won one, which is mainly down to Letruska, who beat her in the Personal Ensign and the Ogden Phipps, spotting her weight both times. There’s no obvious reason why she should turn the tables on Letruska now, although she was charging hard at the end of the Personal Ensign and in another few jumps might have got there, but she is a consistent type and may appeal to exotics players.

Another with a hex on her is Clairiere (+1200), who has seen the back end of Malathaat three times this year without ever finishing ahead of her. Why should she suddenly reverse a season’s form, although she finally got her Grade 1 tag when winning the Cotillion at Parx Racing last month and does come here in good order. British import Pocket Square  was twice beaten in Grade 1 company in midsummer, and although she notched her first Graded win in the Athenia at Belmont Park last month that form doesn’t stack up against the established superstars of the distaff division.

Rounding out the top ten in the futures book are Harvest Moon, two-for-two at Del Mar and fourth in last year’s Distaff but some way below that level in two starts in 2021; Blue Stripe, winner of a Grade 1 in her native Argentina but unraced in the US and a totally unknown quantity; Altaf, a stablemate of Pocket Square and in the same ownership as Malathaat, who has won her last three but has never run in Graded company; and her barnmate Always Carina, who is another pace angle but lacks the class to make that tactic stick.

Letruska is the likely winner if she can get her own way on the lead, but MALATHAAT is less tactically needy and has more than enough class to win the Distaff.

Get a Daily Rebate and make sure to stay tuned for the latest Breeders Cup racing odds, and racing entries.