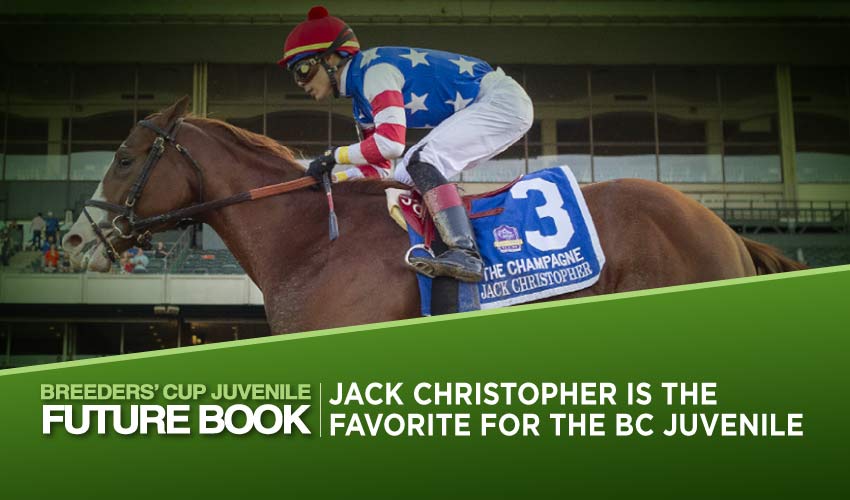 Eleven days remaining before the world championships begin at Del Mar with Future Stars Friday. Here we look at the leading contenders for the Breeders Cup Juvenile, the biggest race of the year for two-year-old colts.

The old saying that ‘form is temporary, class is permanent’ is particularly apt in two-year-old races. Form can change dramatically from race to race as these young horses develop at different rates – like children – and the best horses in August are very often no longer the best horses by the time November comes around.

King of the hill at the moment is Jack Christopher (+200), who hails from the unstoppable Chad Brown barn. Unbeaten in two starts, he parlayed a wide-margin Saratoga maiden win into a devastating display in the Grade 1 Champagne at Belmont Park, for which he went off favourite such was the impression left by that maiden score.

Jack Christopher ran them out of town in the Champagne, sitting on the heels of Gunite until putting that one away at the top of the stretch and then rolling clear to win unchallenged by two and three-quarter lengths. In so doing he posted a huge Beyer Speed Figure and put the nation’s horse-players into a frenzy of excitement. He’s a potential superstar.

But in the ‘cons’ column are the facts that he will now go two turns for the first time, now step up in distance – he wasn’t increasing his lead in late stretch at Belmont – and horses who turn in colossal performances such as that one often find it hard to repeat the dose next time. With these concerns, Jack Christopher is a good horse at bad odds.

Champagne runner-up Commandperformance (+1000) was never involved at the sharp end at Belmont and is a maiden after two starts, but he looked as though he was learning all the time and finished his race off best of all. He will likely move up again and is no throwout despite the lack of a win on his record, given that trainer Todd Pletcher has twice won the Juvenile. Gunite (+2200) ran a huge race to win the Grade 1 Hopeful at Saratoga, but then failed to fire in the Champagne, fading through the stretch to finish fifth. His true worth probably lies somewhere in between, and after six races he lacks the scope for improvement present in several of his rivals.

The west-coast defence is dominated by Bob Baffert, who supplies two leading contenders for a race the controversial trainer has won four times. Corniche (+300), winner of a Del Mar maiden on debut, punched his ticket for this with a barnstorming performance in the Grade 1 American Pharaoh at Santa Anita, where he went gate-to-wire and drew off in the stretch to score by more than three lengths.

That was at the Juvenile distance of a mile-sixteenth, and Corniche saw it out well. He led at every call on his debut too and figures to be on the lead again, a tactical ploy that will worry rival jockeys as they know for sure he won’t be coming back, they’ll have to go and catch him. Runner-up Pappacap (+1200), winner of the Grade 2 Best Pal at Del Mar in August, was firmly second-best in the American Pharoah but did finish off his race nicely, although not with such vigour as Oviatt Class (+2000), who was a distant last on the turn but kept on willingly past beaten horses to take third. Oviatt Class was an impressive winner of his maiden over a mile at Del Mar, but he’ll need to be closer to the action at the top of the lane if he’s to stake a claim in this.

Baffert’s other big player is Pinehurst (+700), unbeaten in two starts at Del Mar and another gate-to-wire Grade 1 winner, with his top-level victory coming in the Del Mar Futurity over seven furlongs, in which Pappacap was a dull fourth after ducking out leaving the gate. Pinehurst went faster on the lead than did Corniche, although that’s to be expected; what is not to be expected is that both Baffert horses will burn themselves out in a speed duel, so one of them will have to adapt his natural exuberance. Corniche seems the favoured son, underlined by the decision of ‘Big Money’ Mike Smith to partner that horse over Pinehurst.

It took three starts for Rattle N Roll (+600) to break his maiden, getting it done with a dominant display at Churchill Downs, but then he stepped right up in the Grade 1 Breeders’ Futurity at Keeneland, drawing off in the stretch to win going away by more than four lengths over the mile-sixteenth of the Juvenile. That was a very impressive performance from a colt lacking in the sort of hype that surrounds Jack Christopher and Corniche, and his blend of tactical versatility and proven stamina makes him a must for exotics players.

Six lengths back in fourth at Keeneland was American Sanctuary (+2000), who never got into the action after racing well away from the pace for the first half-mile. He is one of a pair of entries from trainer Chris Davis, the other being Tough To Tame (+2000), winner of a maiden and an allowance before losing out by only a neck in the Grade 3 Iroquois at Churchill Downs, belying his boxcar odds with a tenacious display.

Both Davis’s horses need to do plenty more to play a central role in the Juvenile, as does Giant Game (+2500), winner of a Keeneland maiden by three lengths over a mile-sixteenth, although given the caveat of the opening paragraph nothing should be taken for granted.

The brief career of Jack Christopher cannot be faulted and it’s easy to see why he’s favourite, but Corniche and Pinehurst are similarly promising. RATTLE N ROLL is also a Grade 1 winner and at current odds makes major appeal as a lock to hit the board.