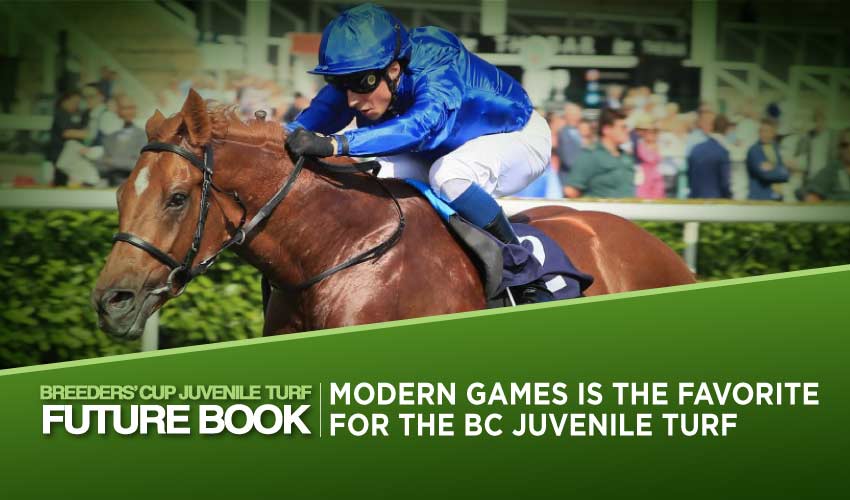 The Breeders Cup Juvenile Turf often brings together strong contenders from Europe to take on the locals at their own game, and this year is no exception. Here we examine the merits of the best of British versus the leading lights of the home defence before the clash at Del Mar on Future Stars Friday. We bring you the Juvenile Turf Future Book.

The European superpowers of Aidan O’Brien and Charlie Appleby have between them won the Breeders Cup Juvenile Turf six times in the last ten years, so it only makes sense to start the hunt for the winner with their representatives. O’Brien’s plans are as yet unformed – his best colt Luxembourg certainly isn’t coming, although anything he sends will be worthy of very close attention – but Appleby is responsible for the first two in the market.

The barn leader is Modern Games (+300), who is three-for-five and stepped up from minor company with an authoritative all-the-way win in the Group 3 Tattersalls Stakes at Newmarket last time. He asserted his advantage through the final furlong, which rises towards the winning post, and should be well suited by getting the mile for the first time – he has only ever raced at seven furlongs.

He relishes fast ground – he was beaten on his only try on a yielding surface – has experience of racing around a turn and doesn’t have to lead, which is a bonus given that European horses are generally slower from the gate than the local runners.

On official British ratings he is 3lb superior to stablemate Albahr (+500), who took his winning streak to four when coming from the back of the pack to win the Grade 1 Summer at Woodbine over a mile. The performance was easy to like but the runner-up Grafton Street is still a maiden and it wasn’t a strong Grade 1 by any standards. Albahr is a tough cookie, though, and his experience of the North American approach to the game can only be an advantage.

Fellow British raider Dubawi Legend (+700) has better credentials than both, having followed home European two-year-old champion-elect Native Trail in the Group 1 Dewhurst over seven furlongs at Newmarket last time. He was beaten only two lengths there after trying to make all, a performance that represented a huge step up on his previous form, and he seems to prefer fast ground.

The Dewhurst is the premier two-year-old contest in Europe and on pure form Dubawi Legend is comfortably the best horse – officially rated 5lb clear of Modern Games – in the Breeders Cup Juvenile Turf. The mile is an unknown quantity but he shapes as though it will be no problem for him, and with just three starts to his name there is plenty of scope for further improvement.

The Grade 2 Pilgrim at Belmont Park is the pivot upon which the home defence swings, although it’s not always wise to draw firm conclusions from a four-runner field. Annapolis (+550) and Portfolio Company (+1500) shared the lead over that mile-sixteenth until Annapolis finally got the better of his rival in a knock-down, drag-out fight for the prize, winning a thriller by a head.

Annapolis has always been highly regarded, started brightly when winning a Saratoga maiden by four and a half lengths, and the evidence of the Pilgrim simply reinforced the perception of his talent. We know that he stays well, that he enjoys a battle, and the experience of a hard race will be a big asset in his toughest test so far. Portfolio Company had previously finished runner-up in the Grade 3 With Anticipation at the Spa, beaten two lengths by Coinage after that horse had been allowed an easy lead, although that form is probably a throwout; next time out Coinage (+1300) was a well-beaten third down in class in a stakes at Monmouth Park.

That Monmouth stakes saw Dakota Gold (+1500) emerge as a contender, moving up nicely after his debut success in a Saratoga sprint. He showed a good attitude in New Jersey on his first start on turf, drawing off strongly from mid-stretch to score by two and a half lengths, with Coinage fading in the lane and beaten a further six lengths into third.

That showed plenty of promise, but the unbeaten Dakota Gold – and by extension Coinage – will need to find plenty of improvement in this much better contest, although with just two races under his belt improvement is likely anyhow.

Home advantage may count for the Juvenile Turf Future Book

Course and distance stakes winner Mackinnon (+800) took his winning streak to three when landing another stakes – this one at Santa Anita – in style, showing a strong late kick to get the job done by two and a quarter lengths. The son of American Pharoah has won twice at Del Mar, which can only be an advantage, but it’s a big leap into Grade 1 level and his odds are a little skinny for a colt with plenty to prove.

The distance may be the issue with Slipstream (+1000), who won the six-furlong Grade 3 Futurity at Belmont Park when stepping down from the seven over which he’d broken his maiden at the same track. A mile may not be what he wants right now, and the Futurity form doesn’t stack up well against this opposition.

Tiz The Bomb (+1000) couldn’t wait to get started in the mile-sixteenth Grade 2 Bourbon at Keeneland, breaking through the gate before being recalled, and he showed plenty at the business end too when finishing his race off strongly to win by three-quarters of a length. That took his winning streak to three, following victory in a stakes at Kentucky Downs where he beat the rallying Saratoga maiden winner Kiss The Sky (+1400) by three-quarters of a length, and he’s coming to concert pitch at the right time. Exotics players should be on his side.

The home team lacks a little strength in depth despite the obvious claims of Annapolis and Portfolio Company, and this may be a race for the Europeans. The Godolphin pair are strong but preference is for DUBAWI LEGEND, whose form is the best available to win the Breeders Cup Juvenile Turf.