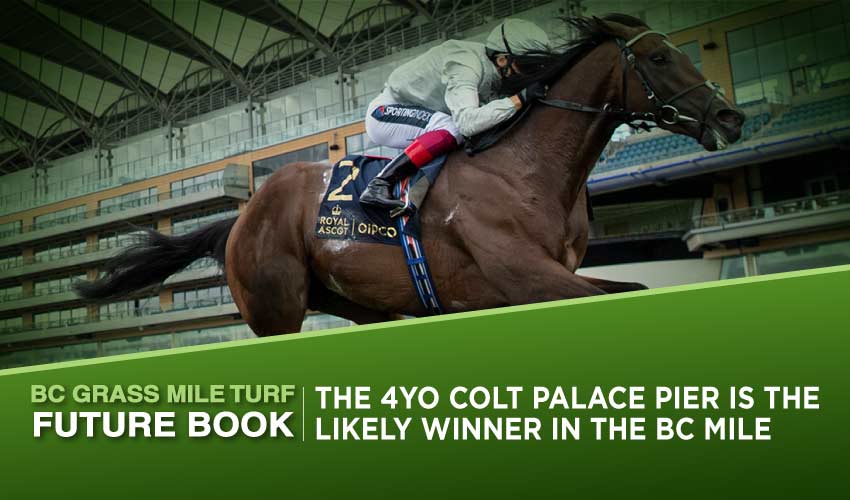 Just three weeks and counting to the Breeders’ Cup at Del Mar; here we examine the leading contenders for the $2m Mile on turf, which always provides a mouthwatering clash between the European raiding party and the best of the home defence. Horse Racing Tote brings you the top 10 favorites Breeders Cup Mile Future Book in case you are wondering how’s the racecard doing!

The first thing to note is that this race has not been harvested by the Europeans as often as might be expected, with the locals keeping the dollars at home in seven of the last ten runnings. Some great European horses have won this race but it is not such a ‘gimme’ for the tourists as the Breeders’ Cup Turf.

The second thing to note is that the outcome of the Group 1 Queen Elizabeth II Stakes over a mile at Ascot on Saturday will have a major bearing on the European challenge. The principals may travel to the US, they may be roughed off for the year, they may be retired; at time of writing it is impossible to be confident about the make-up of the raiding party.

Leader of the pack in Europe is the brilliant and arguably still slightly underrated Palace Pier (+200), last year’s champion miler and certainly this year’s champion if he wins at Ascot on Saturday. There are no flaws in him: he is nine-for-ten lifetime with five Group 1s, he has won on fast ground and in the mud, on a straight course and round a turn, and his only defeat came when he lost a shoe and finished third.

Last time out he turned back the ferocious Poetic Flare – who has been retired to stud – in the Prix Jacques le Marois at Deauville, France’s top mile contest, but his participation at Del Mar is contingent on the Ascot race. If he wins, and he travels, he is the one to beat.

His main rival at Ascot is the unbeaten Baaeed (+650), who didn’t race at two but is five-for-five at three in a career that only began in June, and such has been his meteoric rise that it’s hard to know the extent of his ability. His first four starts were against greatly inferior rivals, but he graduated to the Group 1 stage when an impressive winner of the Prix du Moulin at Longchamp last time out, kicking clear of last year’s Breeders’ Cup Mile winner Order Of Australia (+1200), who has not regained that level of performance in 2021 and ran a shocking race when finishing last at Keeneland last weekend.

If we’re still slightly in the dark about Baaeed, it’s a different story with Space Blues (+700). We know precisely what sort of horse he is – he’s a top-class seven-furlong runner. He hasn’t raced at a mile since the beginning of his three-year-old campaign, and since then he has won eight times at seven furlongs, including the Group 1 Prix de la Foret at Longchamp last time out.

That was the best performance of his life, and the fast ground at Del Mar will be okay, but it’s a mile. In Europe he would be a longshot to beat Palace Pier at a mile, and if he could cut it at a mile you’d think that such a shrewd operation as Godolphin would have asked him to do that before now. It’s a major query over his prospects.

The same query applies to Marianafoot (+1200), whose eight-race winning streak was built in lesser grade until he ran out a convincing winner of a Group 1 at Deauville in August. That was over six and a half furlongs on soft ground, and his form at a mile is both some time distant and not good enough in this company anyway.

The filly Alcohol Free (+1200) runs at Ascot against Palace Pier and Baaeed, so again we must wait and see. Her form at a mile is very good – throw out her last run, when she failed to stay a mile and a quarter at York – but she seems to favour soft ground, as it was when she beat the aforementioned Poetic Flare in the Group 1 Sussex Stakes against colts and older horses at Goodwood.

Elder statesman Benbatl (+1200) is another Ascot contender, but conversely is much better on fast ground. A mile is his bare minimum, his four Group 1 wins have come over nine furlongs or ten, but he holds his form very well at the age of seven and if he travels is just the type to run a big race.

It’s difficult to relate the achievement of Danon Kingly (+1200) in winning the Grade 1 Yasuda Kinen at Tokyo in June to European or US form, although quite evidently he’s a good miler who goes well on fast ground and Japanese form must never be underestimated.

The home defence may not be strong in numbers but the quality is there, with the prolific Mo Forza (+1000) leading the line. The five-year-old has won eight of his last nine races, three of them at Del Mar, and last time out finished off strongly to get up close home and win the Grade 2 City Of Hope Mile at Santa Anita by half a length from Smooth Like Strait.

Everything points to him running a huge race at Del Mar – track form, recent form, mile form – and although his achievements don’t match up to the Europeans he’ll be a tough nut to crack in his own backyard.

Chad Brown’s horses are in stunning form right now, although neither Domestic Spending (+1000) nor Tribhuvan (+1000) can be regarded as milers. The former beat the latter by two and three-quarter lengths in the Grade 1 Manhattan at Belmont Park in June, but that was at a mile and a quarter. Tribhuvan then won the Grade 1 United Nations over a mile and three-eighths at Monmouth Park, while Domestic Spending was surprisingly beaten into second place in the Grade 1 Mr D at Arlington over ten furlongs.

Palace Pier and Baaeed are the best milers around and if one or both travel to Del Mar then that’s the race done. With doubts over their participation at this stage, a safer wager right now is MO FORZA to show, given he has ticks in every box for this.

Get a Daily Rebate and make sure to stay tuned for the latest Breeders Cup racing odds, Horse betting guide and racing entries.