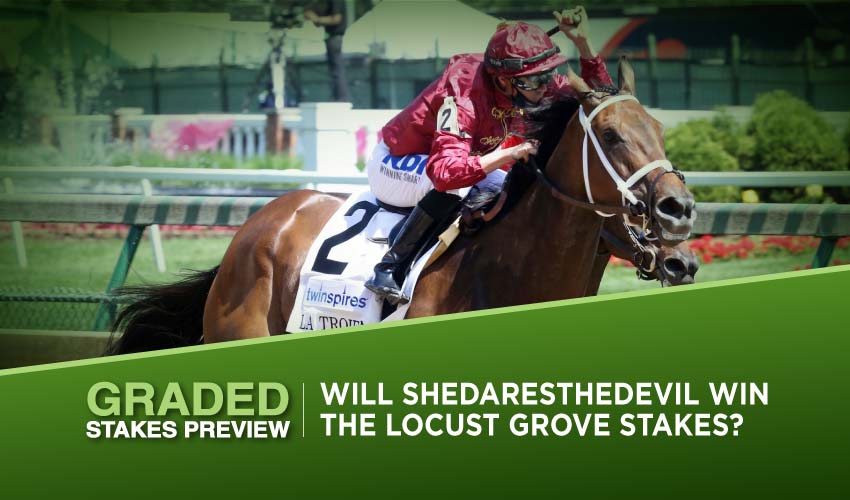 The Twin Spires of Churchill Downs are back in focus during the Louisville track’s September meet, and on Saturday night there are three Grade 3 races under the lights with Breeders’ Cup potential aplenty. The juveniles get the opportunity to stake their claims in the intriguing, complex Iroquois and Pocahontas, while looking further ahead both races mark the beginning of the points-based series Road to the Kentucky Derby and Oaks. The biggest purse of the night belongs to the Locust Grove, which has drawn a strong entry of distaffers including track specialists Shedaresthedevil and Envoutante.

Steve Asmussen will always have a photo of Stellar Tap on his wall, the colt being winner number 9,446 for the trainer and putting him top of the all-time US standings. The son of Tapit may be more than just a milestone, though, as the impressive nature of that victory gives him a leading chance up in grade in the Iroquois.

The race is named for the first US-bred to win the Epsom Derby, all the way back in 1881, and is both a win-and-in for the Breeders’ Cup Juvenile and the first points-scorer on the Road to the 2022 Kentucky Derby. Stellar Tap gave notice that he might one day be that sort of horse when drawing off to score by five and a quarter lengths at Saratoga, having been on the lead from the half-mile pole.

That big-track form entitles him to preference over stablemate Guntown, a son of Gun Runner, who cleared away for a four-and-a-quarter-length win at Ellis Park last time out on his second start. Several of these horses have winning form from the same venue, notably Roger McQueen, who must spot all today’s rivals 2lb after landing the black-type Ellis Park Juvenile by a half-length from Lucky Boss.

That weight concession may make it difficult, especially as previous Ellis Park winner Lucky Boss was dropping back from a mile on that occasion and may be better suited by stretching out again. Both, though, have greater claims than Red Knobs, whose wide-margin Ellis win reads better than the reality, as the favourite and his main challenger fell in deep stretch.

Gulfstream Park winner Strike Hard impressed in a race in which the first two drew a long way clear of the third, while it’s impossible to know what Husband Material achieved when winning by more than 20 lengths from just two rivals at Delaware Park, although the suspicion is ‘not that much’.

Both Tough To Tame (at Indiana Grand) and Magnolia Midnight (at Colonial Downs) looked comfortable in victory last time out, and although both now step up in class and by three furlongs should not be dismissed, especially the latter. However, neither appeals nearly as much as Major General, whose debut victory at Saratoga hinted at considerable potential.

The Todd Pletcher-trained son of Constitution went gate-to-wire at the Spa, holding on gamely in the final strides to turn back the more experienced Bourbon Heist by a neck. That was a big play from a debutant, considering that Bourbon Heist had previously got within a head of subsequent black-type-placed Midnight Worker, and it would be a surprise if Major General doesn’t have plenty more to offer with the benefit of that run under his belt.

Racing Pick for this race Ontheonesandtwos (Goddess Of Fire to show)

Such has been the spotlight on freshman sire Gun Runner this summer that it makes sense to pay particular attention to each of his progeny, so Joyrunner draws the eye first in the Pocahontas, a win-and-in for the Breeders’ Cup Juvenile Fillies and the first step on the Road to the 2022 Kentucky Oaks.

She is unbeaten in two, both at Indiana Grand, latterly last month when drawing right away from a field of previous winners to score by eight and a quarter lengths. Joyrunner can’t be faulted on pedigree or performance but moves into the big leagues now and there are no guarantees, although that applies to practically every filly here.

Another wide-margin winner last time was Hidden Connection, who blew them away to the tune of seven and a half lengths on debut at Colonial Downs. Like Joyrunner, she steps right up in distance now, but there’s no doubting her potential, which goes also for Majestic D’Oro, whose debut success at Indiana Grand was only a little less emphatic. A slightly different case is fellow Indiana Grand winner Miss Chamita, who got off the mark only at the fourth attempt in a moderate contest, albeit by six and three-quarter lengths.

One with much more substance to her claims is Ontheonesandtwos, a winner under the Twin Spires on debut. Next time out, again at Churchill, she came home second best in a Listed contest, which entitled her to a favourite’s chance in the Grade 2 Adirondack at Saratoga, although her chance went west with a poor start and she could never get competitive.

She is better than that, and the return to Churchill, allied to her substantial – in this situation – racetrack experience, gives her solid credentials.

Goddess Of Fire, from the powerful Todd Pletcher barn, got up close home to make a winning debut at Saratoga in a race where the front two were well clear, and her big-track form gives her a boost. Another winner at the Spa was Lemieux, but that was not much of a race against only two rivals and she will find this a good deal tougher.

That goes for a quartet of Ellis Park maiden winners, comprising Code For Success, Mama Rina, whose victory came on turf at today’s distance, Maxine Machine, who got home over a mile on turf on debut, and Kneesandhips, another turf debut winner.

Kneesandhips did move on from that next time out at Saratoga, when she only worked out what was expected too late, then kept on gamely for third in a Listed contest behind the useful-looking Chi Town Lady, and if progressing again might have the zip to make her presence felt.

She has a perfect record at Churchill Downs, and slips down in class after winning a Grade 1 on her previous start, her third top-level strike in six races. Shedaresthedevil may be bottom of the racecard in the Locust Grove but she is top of the list of likely winners.

The Brad Cox-trained four-year-old is developing into a remarkable filly. She is eight-for-15 lifetime and has been off the board only once, when fourth on her third start, demonstrating consistency and class in equal measure. An outsider when winning the Grade 1 Kentucky Oaks here a year ago, Shedaresthedevil has proved that was no fluke with two subsequent Grade 1 victories, firstly over course and distance in the La Troienne in April, and then at Del Mar last month.

She wasn’t at her best in the Clement Hirsch that day but didn’t need to be, nevertheless clearing away from her overmatched rivals in mid-stretch for a convincing victory. Expect Shedaresthedevil to perk up again back in the shadow of the Twin Spires, where she is four-for-four, and this looks the ideal appetiser before a tilt at the Breeders’ Cup Distaff back at Del Mar in November.

Her barnmate Matera is at a different stage of development and arrives here on a three-race winning streak in minor company. Last time out she ground out a game win over Lady Kate in a Listed contest at Ellis Park, prevailing by a neck with High Regard a never-dangerous third, and is comfortable at this distance if not yet at this level. Lady Kate was runner-up in last year’s La Troienne behind the mighty Monomoy Girl, but hasn’t recaptured that standard since and needs to step up.

A better alternative for those looking to beat the favourite is Envoutante, another who brings her best at Churchill (three-for-five). She was a way behind the top-class Letruska in the Grade 3 Fleur De Lis here in June, but that’s no disgrace, and she pushed Shedaresthedevil hard in the La Troienne, giving best by only a length.

In between she romped home in the black-type Shawnee over course and distance, chasing the pace until quickening away around the turn. That was impressive, and if she can recapture the elan she showed when thrashing Bonny South by six lengths in the Grade 2 Falls City over nine furlongs here last November – Our Super Freak a distant fourth, and now without a win in nine starts – then she rates a major danger, although admittedly she was allowed an easy lead on that occasion.

Crystal Ball breaks from the inside post and has been in fine form in 2021, compiling a three-race streak at a lower level – similar to Matera – before running a big race in the Grade 3 Shuvee at Saratoga, beaten a length into third by Royal Flag. That reads well in this contest, she has winning form over course and distance, and is another to consider alongside Envoutante if playing exotics.