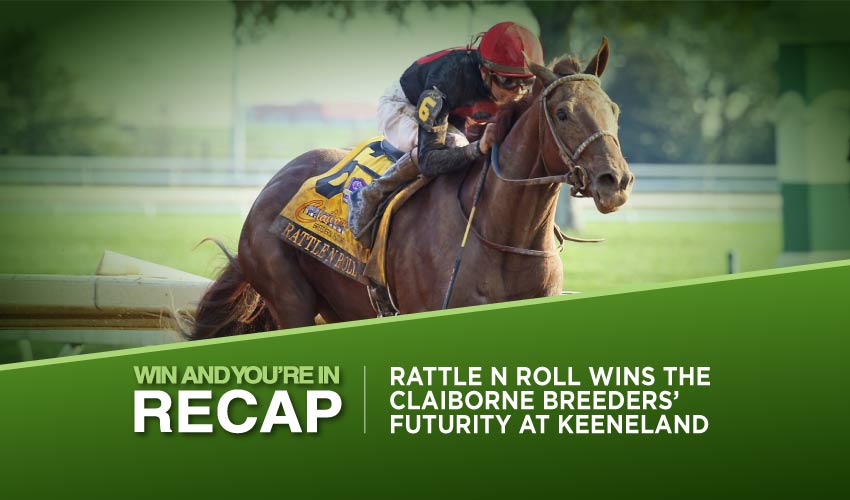 Saturday’s card at Keeneland offered a range of exciting races whose winners earned a berth in respective Breeders’ Cup races, while the winner of Claiborne Breeders’ Futurity was also awarded 10 points towards the Road to the Kentucky Derby 2022. Rattle N Roll succeeded among two-year-olds, being the first surprising winner of the Grade races as Brazilian raider In Love scored the Keeneland Turf Mile Stakes. In other Breeders Cup races, the favorites weren’t denied.

On Saturday, the series of Grade races was opened by this G2 turf sprint for three-year-old and older horses, where Golden Pal (1-2) managed to fulfill the role of a favorite. The Wesley Ward bound bay has always looked like a promising sprinter, and even though he was disappointing in the Nunthorpe Stakes last time out, he seemed the leading chance at the distance of five and a half furlongs and to earn the most of the purse of 200,000 USD. As usual, three-year-old Golden Pal broke quickly and went for the front; however, he looked in trouble when turning for home.

Firecrow (63-10) was pressing into him dangerously from the outside; however, he faltered quickly, while Golden Pal was only bracing himself for another spurt of speed. When John Velazquez asked him for more in the final stretch, Golden Pal just replied with a smooth retrieval of the first place, upon which he scooted clear of his rivals and crossed the line in 1:03.12. He seized his second G2 victory by 2 a ¼ of a length before Extravagant Kid (33-10). The eight-year-old veteran spent the race in the midpack, but as Jose Ortiz wanted to send him to the fence in the final stretch, suddenly the gap disappeared. Therefore, he had to switch him to the outside, where the G1 winner from Dubai managed to leave his rivals behind except Golden Pal, who was just uncatchable for him.

The second three-year-old in the field, County Final (12-1), grabbed third place when finishing from the rear of the field, following in Extravagant Kid’s footsteps basically. Mentioned Firecrow ran out of the steam so quickly, he couldn’t hold on to any good place and finished one but last.

The G2 dirt race for three-year-old and older fillies and mares was held at the distance of 6 furlongs; still, the preferred participant could allow herself a slower start on her way to a tight victory.

The purse of 250,000 USD attracted a field of six, while Bell’s The One (11-10) was a clear favorite here and ridden by Corey Lanerie; she didn’t accept the pace initially. Trailing behind her rivals, the five-year-old charge of Neil Pessin started closing on the field in the second half of the race, and suddenly, Bell’s The One got into contention for the win. Going wide in turn, it didn’t stop her at all as she gradually gained the lead on the outside, and even though she never fully shook her rivals off, Bell’s The One struck gold in 1:08.6.

Club Car (14-1) also rallied forward on the outside; still, she mostly kept pushing Bell’s The One to the finish line and posed a real threat only in the final strides. Losing to her by a neck, she left Estilo Talentoso (27-10) in third, while front-running Ithemidstofbiz (93-10) took fourth. Although she took the prize in last year’s edition of the race, the mare was no match for the favorite this time. Frank’s Rockette (13-5) didn’t fare well, too, and made no impression here.

The successful mare, Bell’s The One, has bagged her third G2 victory, while she’s also a winner of the G1 Derby City Distaff S from May. After her last year’s third place in the Breeders’ Cup Fillies & Mares Sprint, she should be once more in the mix as, thanks to Saturday’s triumph, she’s qualified for the event.

The first G1 race of the afternoon was open to three-year-old and older fillies and mares who clashed at the distance of a mile, while on the turf surface, the favorite had no luck here.

Althiqa (13-10) couldn’t draw on her summer exploits as most of the purse of 400,000 USD snatched the Chad Brown-trained duo Blowout (53-10) – Regal Glory (29-5). The former broke away from an outside stall, still, he had enough early speed to successfully aim for the front. Flavien Prat was slightly holding her back, but the five-year-old mare wasn’t fighting him, traveled smoothly throughout the whole race until her stable-mate Regal Glory challenged her in the final stretch. The latter looked to run down her rival; however, Blowout was all heart when fighting for the win that she eventually achieved in 1:34.86.

Six-year-old Regal Glory secured the prestigious double for Chad Brown as she lost to Blowout by half of a length but held other contestants easily. A bit surprisingly, three-year-old Classic winner Empress Josephine (23-2) was the better one in the European duo, finishing strongly from the midfield to grab third place in front of unlucky Althiqa.

The grey trained by Charlie Appleby won two G1 races in summer, while the First Lady Stakes looked like a race should bag as well, but James Spencer aboard got stuck with her on the fence in the final stretch. Twice, or even three times, he had to take her back and find her a gap to fit in; however, when Althiqa finally could rally forward, she seemed quite discouraged by the incidents. Still, Blowout’s victory shouldn’t be discarded in any way, given she’s a remarkably consistent mare, deserving such a success.

10 points for the Kentucky Derby leader board, a berth in the Breeders’ Cup Juvenile, and most of the purse of 500,000 USD was promised to the winner of this G1 dirt race held at the distance of a mile and a furlong, while it was Kenneth McPeek’s charge Rattle N Roll (87-10) who caused the mild upset here and collected the prizes.

In the field of 13 two-year-olds, Classic Causeway (19-10) took command and was showing the way since the beginning up into the final stretch, where Rattle N Roll bolted up on the outside. The Connect colt quickly seized the front and drew clear of his rivals, crossing the wire in 1:43.78 while totally dominating the race after he spent it in the midfield. As he made a move in the second turn, he benefited hugely from Brian Hernandez’s decision to point him outside, so in the end, he had free space in front of him to surge forward, unlike Double Thunder (36-5). While Rattle N Roll was cruising to a victory with the advantage of 4 and a half of a length, Double Thunder had issues with a shortage of space; still, he managed to unfold such a finish, he ran down Classic Causeway and grabbed the second place. American Sanctuary (53-2) was another contestant whose run was hindered by the barrier of his rivals, blocking his way forward, but his finish to fourth place was an eye-catching one.

While some of his rivals were rather disappointing on Saturday, Rattle N Roll was impressive when going for his fourth outing, following his success in the maiden. It’s a question of whether he’ll be able to add another victory in the Breeders’ Cup Juvenile for which he’s just qualified.

Another surprising result of the afternoon was brought about by Brazilian trainer Paulo H. Lobo who won the last year’s edition of the G1 turf race with Ivar (4-1). In 2021, he succeeded with In Love (12-1), whose victory among three-year-old and older horses was shocking yet sure.

The purse of 750,000 USD attracted 12 participants who clashed over a mile, while Alexis Achard let his mount settle in seventh place at the fence where he was blocked to improve his position in the final turn, but the jockey was patient. He waited until the field arrived at the final stretch where he took In Love outside, upon which the five-year-old gelding picked it up. Passing his rivals one by one, In Love smoothly took command and forged his second start in the US into a victory by 1 and half of a length. Crossing the finish line in 1:34.84, In Love left the rest of the field to the fight for the second place, in which Tell Your Daddy (29-1) prevailed after being close to the front since the beginning. Throughout the final stretch, he was all heart when dueling with Somelikeithotbrown (34-5), who had to settle for third place. Still, both of them delivered very gallant performances.

The winner’s stable-mate and last year’s winner Ivar finished in fourth, running a good race unlike the preferred four-year-old colt Order of Australia (6-5). The Aidan O’Brien’s charge won the Breeders’ Cup Mile in 2020, and his two most recent efforts suggested he was in fine shape; however, he failed to impact Saturday’s race and finished last, beaten even by some of the biggest outsiders.