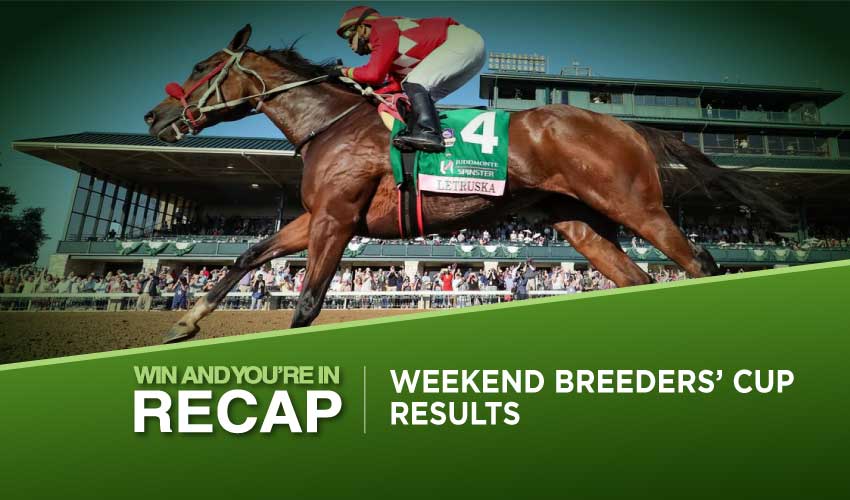 They came, they saw, she conquered, the Breeders Cup races results at Keeneland this Sunday was all about the magnificent mare Letruska, who won her fifth race in a row and her fourth Grade 1 with a merciless display in the feature Spinster, underlining her position as favorite for the Breeders’ Cup Distaff and as serious contender for Horse of the Year honours. Two-year-olds lit up the undercard, with both Tiz The Bomb (in the Grade 2 Bourbon) and the superfast Averly Jane (in the Indian Summer) booking their tickets for Future Stars Friday at Del Mar next month with impressive victories.

So easy for superstar Letruska

She did it again. Letruska did it again. The marvellous mare won her fifth race in a row at Keeneland on Sunday, adding the Grade 1 Spinster to her extensive roll of honour and laying down a marker of excellence that could prove beyond all her rivals in next month’s Breeders’ Cup Distaff. The Spinster was ‘win-and-in’, but Letruska was in a long time ago.

As usual, Letruska was in front at every call. She wins her races by taking an early grip and never letting up, choking the threat out of the opposition with a relentless display of front-running. She is 17-for-22 lifetime and six-for-seven during 2021, with her only defeat coming when she didn’t get the lead in the Azeri at Oaklawn in March, and was beaten by a head. But for that she’d be unbeaten in eight straight, but no-one’s complaining.

“I’ll tell you, this is a horse to change the life for any person,” trainer Fausto Gutierrez told the BloodHorse. “She’s a superstar and she proves it every second, every race. She has shown her game, her ability at Churchill, at Oaklawn, at Saratoga. She’s a racehorse.”

She sure is, and she makes a race review simple. Broke well, made all. This time she went to the front, opened up a two-length gap, and began remorselessly twelving her rivals to death, pounding out fractions of 24.0, 47.9, 1:12.5, 1:36.5, as regular as a metronome. Envoutante followed her, then Crystal Ball took over pursuit, then Dunbar Road chased her down the stretch, but she could never get close.

Letruska coasted under the wire like a princess, clear by a length and three-quarters. You don’t get rich by betting on her, not at a payoff of $2.80, but just watching her makes you feel like a millionaire. She stopped the clock in 1:49; Dunbar Road was second, two and a quarter lengths ahead of Bonny South. Del Mar, here she comes.

“She was just moving smooth out there,” said jockey Irad Ortiz. “She didn’t go that fast today but she did it easy, relaxed. Whenever I asked her she was there for me.”

The joy of six

The five-year-old, a daughter of 2010 Kentucky Derby winner Super Saver, has been there all year. Her six victories have come at six tracks, from Sam Houston in the south-west to Saratoga in the north-east, and among them are four Grade 1s: the Apple Blossom, the Ogden Phipps, the Personal Ensign and now the Spinster.

Now she’ll go west, all the way to the sea, and although Gutierrez has not entirely ruled out taking on Essential Quality and Knicks Go in the Breeders’ Cup Classic, he has the Distaff firmly in his sights. “Boys with boys and girls with girls,” he said, like a grade-school teacher. The opposition will include the vanquished Dunbar Road (who she has now beaten twice) and Bonny South (who she has beaten three times) as well as the brilliant three-year-old Malathaat, who may be the only filly in the world who can give Letruska a race over nine furlongs, ten furlongs on dirt.

“These kinds of races, there is a lot of pressure when you are the big favourite,” added Gutierrez. Letruska will be a big favourite again in the Distaff, and if she wins that she will be firmly in contention for Horse of the Year. Lot of pressure. Most of it, though, on those taking on the near-impossible task of stopping Letruska, the life-changing horse who just keeps on keeping on.

Bomb disposes of the opposition

Tiz The Bomb was eager to get on with it in the Bourbon, so keen to get going that he broke through the gate and went a furlong before Brian Hernandez could get the message through to hang on a minute, turn round and come back. He wasn’t first out at the second time of asking, but he was first home.

The Grade 2 contest was a ‘win-and-in’ for the Breeders’ Cup Juvenile Turf, and that’s where Tiz The Bomb is headed after posting a battling success, overcoming not only his pre-race excitement but also post 12, although his outside draw didn’t prevent bettors sending him off as the 5-2 favourite.

Hernandez did well to get the son of Hit It A Bomb – who won the Juvenile Turf himself six years ago – into a good position from the gate, angling in to sit close behind the pace set by Heaven Street. He came wide into the stretch as Red Danger took over on the lead, and settled into a grinding drive that took him past Red Danger inside the final sixteenth and on to a three-quarter-length victory, in a time of 1:43 and three-fifths.

Stolen Base, who had been a long way off the pace through the first three-quarters of a mile, was charging hard late and took second spot by half a length from Credibility.

“We were ready, we were set up, and as the last horse was walking in I turned his head to set him to where we could leave the gate in good order,” said Hernandez. “When he did that he got a little anxious and just charged forward one step and the gate popped open.

“Most of the time when that happens horses have a hard time recovering from it, but when we finally reloaded and he left the gate the second time, we were able to get around the first turn in a good spot. I was really confident in him, and he took care of it from there.”

His Bourbon triumph took Tiz The Bomb’s winning streak to three, following on from victory in a stakes race at Kentucky Downs on his previous start. Now trainer Kenny McPeek, who also has Saturday’s Grade 1 Claiborne Breeders’ Futurity winner Rattle N Roll to consider for Del Mar next month, is looking ahead, a long way ahead.

“He’s special. We’re gonna have a lot of fun with him,” McPeek told the Daily Racing Form. “We’ll probably nominate him to the English Derby. If we’re able to run him over there, I’d like to do that. I think he’s a horse that could handle that.”

At present, though, horses in the ownership of Phoenix Thoroughbreds – in whose colours Tiz The Bomb runs – are not permitted to be entered for races in Britain (or France and Dubai) owing to issues with the legitimacy of the group’s funding.

On her first try on turf, Averly Jane showed what we had already learned about her on dirt to be true. She is so fast.

The daughter of Midshipman booked her ticket for the Breeders’ Cup Juvenile Turf Sprint with a sizzling display in the Indian Summer, leading every step of the way and stretching her unbeaten run to four. Trainer Wesley Ward is famous for his fast horses – he saddled Breeders’ Cup Turf Sprint contender Golden Pal to win the Grade 2 Woodford at Keeneland on Saturday – but Averly Jane must be near the top of the list for raw speed.

“The surface doesn’t really matter,” said winning jockey Tyler Gaffalione. “She’s just a quality filly. She’s got a tremendous amount of speed, and she just keeps going. She’s one of the fastest out of the gate I’ve ever been on. She almost throws you in the back seat. She’s a lot of fun.”

Fresh from a seven-length win in a Saratoga stakes race, Averly Jane ($3.80) set blistering fractions and drew off in the stretch under a hand-ride, with Gaffalione easing right down in the final strides to keep the winning margin to three lengths. Despite Gaffalione’s attempts to give her an easy time of things with the race safely won, Averly Jane still broke the stakes-record time, coming home in 1:02.65.

Her barnmate Kaufymaker finished well to give Ward the exacta, beating Circle Back Jack into third by a neck, the only two fillies in the race finishing first and second against colts.

Averly Jane has now won a maiden and three stakes by a combined distance of more than 22 lengths, and has beaten the boys three times out of four. There will be better horses than Averly Jane at the Breeders’ Cup Challenge series next month, but there won’t be many faster.

Join us at JazzSports and make sure to stay tuned for the latest fixed horse racing odds, racing entries and Races results.