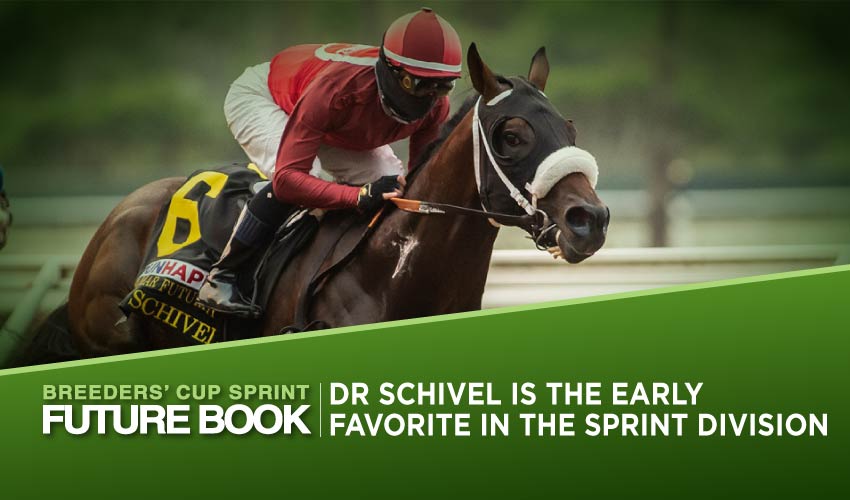 As the Breeders’ Cup weekend draws closer – less than three weeks to go – our in-depth look at the leading contenders for each championship event reaches the Sprint, a race for the fastest horses on earth at the greatest show on earth, and we bring you the Breeders Cup Sprint Future Book Odds for this amazing Qatar Racing Sprint race at Del Mar on Nov 6th.

There has been a changing of the guard at the top of the sprint division; out with the old, in with the young. In last year’s Breeders’ Cup Sprint, the first three homes were aged seven, six, and five, but the market for this year’s race is dominated by three-year-olds.

First and foremost among them is the scintillating Jackie’s Warrior (+100), a hot future-book favorite for the Sprint following a string of outstanding performances through the year. He is eight-for-11 lifetime and only off the board once, when fourth in last year’s Breeders’ Cup Juvenile behind champion Essential Quality, and although he has won a Grade 1 at a mile he is a different proposition at shorter distances.

Last time out he beat up on a moderate lot in a Grade 2 at Parx Racing, so is better judged on his previous effort in the Grade 1 Allen Jerkens at Saratoga in August, when he and Life Is Good went hammer and tongs through the seven furlongs, no quarter spared, until Jackie’s Warrior prevailed by a neck. He likes to run from the gun, setting his own tempo, and the only possible caveat is that he is perhaps not as purely speedy as some of these rivals given his strong showings over seven furlongs.

If Jackie’s Warrior is the beast from the east coast, then Dr Schivel (+500) is the best in the west. This fellow is unbeaten in three starts at Del Mar, including two Grade 1s, and is currently on a five-race winning streak.

He won the Grade 1 Bing Crosby over course and distance in July, and then improved on that effort in the Grade 2 Santa Anita Sprint last month when his right rein broke in the early stages. It didn’t stop him running and he went wire to wire, cruising in by three and a quarter lengths from Flagstaff and CZ Rocket. That was a phenomenal performance considering that his rider couldn’t guide him, and it was a departure from his usual closing tactics. That tactical versatility may be important here.

There is not much that can be said about Flightline (+750) beyond the fact that he has won both his races by approximately 13 lengths and has led at almost every call each time. There’s nothing else to know. His victory in an allowance optional claimer over course and distance last month was visually outstanding, but of course, he beat nothing of any quality. He has endless potential but his inexperience could be his downfall against seasoned and top-class rivals – he hasn’t been in a battle yet, and who knows how he’ll react to that?

The fastest filly around is Bella Sofia (+1000), four-for-five lifetime and easy winner of the Grade 1 Test over seven furlongs at Saratoga in August. She followed that with a stroll in the Belmont Park, hand-ridden to beat three rivals in the Grade 2 Gallant Bloom, but goes up against the boys here in a much tougher contest than those she’s been winning.

Fellow female Kimari (+1000) has twice been placed in Group races at Royal Ascot on turf and proved she could do it here on dirt when winning the Grade 1 Madison at Keeneland over seven furlongs. The major issue is her seven-month layoff since then, a rustiness that could prove crucial in a race where there’s nowhere to hide.

A return to sprinting proved the key to Following Sea (+750) after he hit the board in the Haskell and Allen Jerkens. He went gate-to-wire in the relatively uncompetitive Grade 2 Vosburgh over six furlongs at Belmont Park last time, putting away Firenze Fire with the minimum of fuss, and is open to further improvement now he’s found his niche. He’ll be another sizzling pace factor in what could be a proper burn-up on the lead.

Beau Liam (+1200), a barnmate of Jackie’s Warrior, will be seen to better effect back sprinting after finishing second in the Grade 3 Ack Ack at Churchill Downs over a mile, but needs to move up a long way to figure against this company.

Heading the older brigade is the extraordinary Special Reserve (+1000), who was nothing much until being claimed by trainer Mike Maker at the beginning of the year and is now a top-rank sprinter, with his recent strike in the Grade 2 Phoenix at Keeneland emphasizing his arrival in the big league. He would have won the Grade 1 Alfred Vanderbilt at Saratoga had it not been for the intrusion of longshot Lexitonian and rates a leading player here.

Last year’s Sprint runner-up CZ Rocket (+1500) isn’t getting any quicker at the age of seven and has finished behind Dr Schivel twice in his last three starts, while Flagstaff (+2000) is in the same situation, although he did get his first Grade 1 in a run-of-the-mill Churchill Downs over seven furlongs in May. He’s only one-for-six at Del Mar and his barnmate Flightline is a far more interesting contender.

This brings us to the famously infamous Firenze Fire (+2000), who tried to eat Yaupon during their stretch duel in the Grade 1 Forego at Saratoga. Fifth and third in the last two runnings of the Sprint and put in his place by Following Sea in the Vosburgh latest, he hasn’t won a Grade 1 since his two-year-old days and doesn’t appeal as a potential winner here off a four-race losing streak, although if recapturing his best would have claims to hit the board again.

The three-year-olds are very strong and the winner should come from this age group. Jackie’s Warrior is a superstar but at market odds, DR SCHIVEL is preferred, given his fine record at Del Mar and his lifetime best last time out.

Get a Daily Rebate and make sure to stay tuned for the latest Breeders Cup Horse racing odds, Betting tips and racing entries.