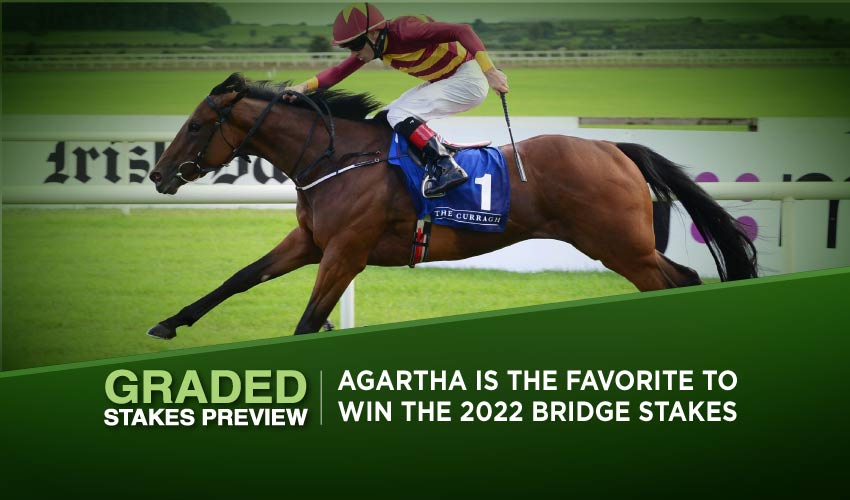 Ireland is set for another action-packed few days of racing with four big races taking place across the Curragh and Tipperary. Here is everything you need to know about the Bridge Stakes, Tower Stakes, Stud Irish EBF Stakes & Snow Fairy Stakes.

Aiden O’Brien has long been associated with Coolmore and it’s no surprise that the master trainer has entered three horses for this year’s renewal.

His best chance most likely comes in the shape of Galleria Borghese. By no means a giant of his yard, Galleria Borghese has previously won at Listed level. Following his Listed success, he made the step up to Group 2 company and ran a credible race finishing 6th in the Kilboy Estate Stakes. Back in slightly calmer waters, he could be in with a real chance of winning his first graded race.

O’Brien’s other two runners Prettiest and West Coast look like they have plenty to find. Both are yet to win this season and on the whole, have struggled in fairly non-competitive races. It would be a shock if either were to get their head in front here.

Joseph O’Brien is starting to get more and more Coolmore horses added to his stable and he runs four in this year’s race.

His best chance and likely favorite for the race will be Agartha. Highly tried, all four of her runs this year have come in graded contests. This season she has hit the crossbar twice in her two Group 3 races and ran with credit in her last two Group 1 races.

She brings the best form into the race and is a former winner at this level and higher. At just three she has plenty of room for improvement and clearly will be the horse to beat.

Looking to upset his stablemate is Illuminazione. Without a doubt the least exposed horse in the field, Illuminazione has only had one career start but it was impressive as he ran out a comfortable winner of his maiden earlier in the season. Despite that form being questionable he will have learned a great deal that day and he could be a player at an attractive price.

The statement will be having his first run for O’Brien having left the Kevin Ryan yard earlier this summer.

It’s been almost two years since Statement last won and he has generally found this standard of racing too hot to handle. Despite his poor record, he has been placed in Group 3 company in the past and that form is amongst the best on offer in this field. O’Brien knows how to improve horses and he could be the value player of the race.

Night of Romance is likely to start at the biggest price out of all O’Briens runners. A four-year-old, he has mostly run in handicap company. This will be his first ever run at this level and after struggling in Listed races it looks like he has plenty to find.

Henry De Bromhead runs Honey Girl in the race and looks like he will have one of the prominent contenders. She is yet to win in her career, however, her 6th place finishes in this year’s Group 1 Coronation Stakes is amongst the best form on offer. If she can run to a similar level she could be in with a real chance.

Sh Boom for G M Lyons, Improvised for David O’Meara, and Spring Feeling for Kevin Condon are all looking to land their first-ever Group race.

Of the three Sh Boom is likely to have the best chance. A runner-up at this grade in April, he has a chance to play a major part in proceedings.

Agartha has the best form but has been frustrating to follow this year. She needs everything to click soon and this could be the race where it does.

At the time of writing, fifteen horses have been declared for this year’s Tower Stakes. Open exclusively to two-year-olds, some smart horses have won this race in the past.

Aiden O’Brien has won four of the last six renewals of this race and runs five in this year’s contest.

His best chance looks to be between the pair of Tiger Paw and Dower House. Both have had three career starts and both were winners last time out. Both got the job done in a gritty fashion and O’Brien will hope that both would have improved ahead of their first graded assignment.

Cairo and Pop Star have both had one career start and it was Cairo that shaped with the better promise.

Running just a few weeks ago, Cairo got the idea of things late to just be denied on his debut. With that experience behind him, he could be a real contender. Pop Star could only finish a disappointing seventh on debut and will need to have improved a great deal if he is to play any part in proceedings.

O’Brien’s most intriguing runner is Paddington who will be making his debut. Impeccably bred, he could cause a shock but is probably best watched here.

Ger Lyons won this race last year with the very impressive Sacred Bridge and will be hoping to repeat the feat with Apricot Twist. With just two runs behind him, it’s hard to know what his chances are. A winner on debut he then backed that up with a midfield finish last time out. He takes a step up in class here and will be an interesting contender.

Paddy Twomey has had a great time of things of late and runs two here. Both Shelton and Treasure Trove won last time out and will be wanting to build on their latest run. Shelton looks like a real speedster and is taking a drop-down in trip here having been victorious previously at seven furlongs.

Treasure Trove is making his eighth appearance of the season and is a real danger to all. Unlike his stablemate, he will be taking the step up in trip following a Listed success at York.  He could be the pace angle of the race and it will be interesting to see if he can last home through the extra furlong.

In what is a muddling race to predict we will back Cairo to build on his promising debut display. The penny dropped late and he would have won given a little more track. Hopefully, he can use that experience to good effect here.

The Group action at the Curragh this Saturday is set to start with the Stud Irish EBF Stakes. At the time of writing eight horses are set to compete in this Group 3 contest.

Likely to head the betting is Shelton for Paddy Twomey. A winner last time out in Novice company, many pundits believe she should be able to make the step up in class here. With only two career races behind her, she can still improve further and could be the one to beat.

Looking to pip Shelton to the post will be Caroline Street who will represent Joseph O’Brien.

Who knows what we could have on our hands with Caroline Street.

She has just had the one start which came in maiden company and she romped home with ease. Another who is looking to take the step up in trip it will be fascinating to see how she runs here.

Maybe Just Maybe for Aidan O’Brien is the most highly trained horse in the race following a 4th place finish in the Group 2 Alpha Centauri Stakes. That was only her second-ever start and she ran well. A maiden winner, a return to this level of racing could see her bounce back into the winner’s enclosure.

O’Brien’s second string in the race is Dame Kiri. This will be her third start and she is yet to win but has finished third on two occasions. Despite not getting her head in front, those runs have been promising and with more improvement on the cards, she could be a good value angle.

La Dolce Vita is looking to extend the growth of trainer Donnacha O’Brien. Easily the busiest horse in the race, this will be her seventh career start. She has just had one victory but did finish third in the Group 3 Silver Flash Stakes. That is decent form but she could be vulnerable to an improver.

A runner at a potentially big price could be Evening’s Empire. A winner last time out, she won her maiden with relative ease. She will be partnered by the excellent Colin Keane and although the form of her maiden isn’t anything special, with improvement on the cards she could be a danger to all.

Caroline Street could be the wildcard of the race and under the guidance of Joseph O’Brien, we think she can add to her burgeoning career with a second successive victory here.

This year’s Snow Fairy Stakes will see six horses canter down to post for this year’s race. This has been a race that has previously been dominated by several of Ireland’s leading trainers.

Joseph O’Brien finds himself with another leading contender in a big race with his horse Seisai.

Seisai has proved expensive to follow this year and hasn’t tasted success in her last seven starts. Pitched mainly at Group level, her second-place finish in the Group 2 Kilboy Estate was a good run. The race represents some smart form and back in Group 3 she rightly should start as the race favorite.

Expected to be near the top of the betting is the Ger Lyons-trained Juncture. She has been campaigned cleverly this season and finished second last time out in the Desmond Stakes. There is every chance that she needed the run that day following a fairly lengthy break before the race. Her display was promising and she should be a lot fitter here.

Jessica Harrington has won this race three times in the last ten years and in Viareggio has an intriguing contender. A prolific winner in handicap company she has mostly struggled in Listed and Group 3 company in the past. Capable of a big run, she could play a big part in proceedings but will need to produce a career-best performance.

Magic Chegaga will enter this year’s renewal following success in the BMW Mile Handicap. She beat eighteen that day and it will be interesting to see how she handles the small field here.

She has just had four runs for trainer Brendan Duffy and has recorded two wins. This is a huge step up in class but she heads here in fine form and could be the value angle of the race.

Aidan O’Brien just runs one horse in the race which is Lullaby. Her form is nothing special and she has struggled in several races this season. This smaller field may help but it would be a shock if she were to put her head in front here.

Rounding out the betting is Female Soldier who represents the Tony Mullins yard. Arguably the least exposed horse in the field, she has just had four career starts.

After winning on her debut she has found things tougher since. This will be her toughest assignment to date and a win looks highly unlikely.

Juncture is our play here. It’s doubtful that she was fully fit in her last race but she should be fit and firing here. Her form is amongst the best in the race and we will back her to land a first-graded success here.