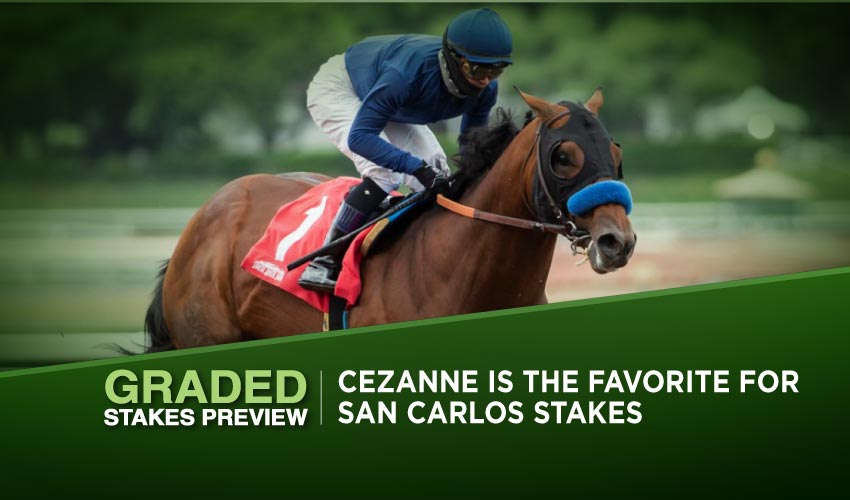 Saturday is a marquee day at Santa Anita with the stakes evenly split between Grade 1s and Grade 2s; the Grade 1s are discussed elsewhere but the Grade 2s are intriguing contests too, with local hero Brickyard Ride bidding for his 11th course win in the San Carlos Stakes and a group of evenly matched distaffers crossing swords in the Buena Vista.

Horses for courses is the angle that springs to mind in the San Carlos Stakes, the opening salvo on stakes-heavy Saturday at Santa Anita, the track’s biggest day of the year. There’s always a lot of love for Santa Anita, but few adore it as much as Brickyard Ride , who has won ten races in his career and all those wins have come at the Los Angeles circuit.

The five-year-old won the San Carlos 12 months ago in his habitual front-running fashion and comes here in sizzling form after two recent stakes wins, the first over six furlongs against state-breds with Principe Carlo just over four lengths back in fourth, and then over a mile in another state-bred affair just 12 days ago, when he blitzed overmatched rivals by seven and a half lengths.

He didn’t have a hard race, so the quick return may not be a factor, and connections are clearly happy to strike while the iron is hot. The intrigue comes with a rematch against Cezanne, a very lightly raced horse who thrashed Brickyard Ride in the Grade 3 Kona Gold here over six and a half furlongs last April, when he gave him a start and then ran him over in the stretch, scooting away to win by almost ten lengths.

The subtext there was a frantic pace, with Cezanne’s barnmate Ax Man hustling Brickyard Ride into breakneck fractions that left him empty when Cezanne came along with the sucker punch. Cezanne has run just once since, a flat third-place in the Grade 3 Palos Verdes here over six in January that should have sharpened him up for this.

He has a wingman once again in the shape of barnmate Eight Rings, but he’s coming back from a mile-plus and doesn’t have the speed to harass Brickyard Ride, and in any case usually comes up short, being zero-for-seven in Graded stakes in the last 12 months.

A place ahead of Cezanne in the Palos Verdes was Shooters Shoot, running the race of his life when beaten only a neck. He has never won a stakes but could do one day, although it’s likely that the formerly ring-rusty Cezanne will flip the form here with that workout under his belt.

This is the stakes debut for Canadian Pride, a consistent speedster who was a comfortable winner of an allowance optional claimer here over six and a half on his most recent outing. He’s in good order but this is much tougher, although he won’t have much to fear from Wicked Trick, who is on a nine-race losing streak, and Phantom Dance, whose usual beat is allowance company at a mile.

This boils down to whether BRICKYARD RIDE can take them all the way like he did in this race last year, and he’s the choice to do it again and gain revenge on old rival Cezanne.

The Buena Vista features a match-up between two mares who don’t have conditions to suit, but who could well have the ability to overcome that disadvantage.

Morning-line choice Going To Vegas has all the class you’d like, with a Grade 1 on her roll of honour from last year’s Rodeo Drive here over ten furlongs, when she led at every call. Before that she took down the Grade 2 John C Mabee at Del Mar over a mile-eighth, but there’s the problem. Going To Vegas is much better when stretching out beyond a mile, and showed when fourth in this race 12 months ago that she doesn’t really have the fizz for this shorter distance.

Conversely, Leggs Galore is a whizz in sprints, winning three state-bred stakes here since the start of 2021 including last time out, when she came back firing from a five-month layoff to lead all the way and post an authoritative victory over six and a half furlongs. Crucially, she also made it stick at a mile when beating three rivals in another state-bred stakes here in May, and if she can set the right fractions in this much better grade she could stay out ahead.

In last year’s Buena Vista, Mucho Unusual was two places and two and a half lengths ahead of Going To Vegas, but she hasn’t run to that level in three subsequent starts and isn’t coming into this race in the same form as 12 months ago, after a slightly disappointing third in the Grade 3 Robert J Frankel here over a mile-eighth in January.

The Grade 3 Megahertz over course and distance is often a stepping stone to this race, but this year’s renewal may not be so relevant. Longshot winner Canoodling was making her Graded-stakes breakthrough when going gate-to-wire and digging deep to last home in a blanket finish, with fellow longshot Avenue De France three-quarters of a length back in third and Madone, who has been out of form since the summer, another length and a half back in fifth.

Irish Group 3 winner Keeper Of Time hasn’t been at that level since her move Stateside but may get a boost from winning a Gulfstream Park handicap over an extended mile last time out, while Closing Remarks also got class relief last time, after defeats in three Grade 1s, when a dominant winner of an allowance optional claimer here over a mile-eighth. Both fillies may appeal to exotics players.

Leggs Galore’s barnmate Tony Ann is making her stakes debut and looking for a four-timer, although she will find this considerably tougher than the allowance optional claimer here over a mile-eighth in which she just held on by a diminishing neck.

Going To Vegas has the class but not the speed, LEGGS GALORE has the speed but may not have the class. The latter is the selection with that one win here at a mile on her record.

Take a look to our Horse racing odds, racing entries, and races results. Sign up to get our daily horse racing news and become a winner.