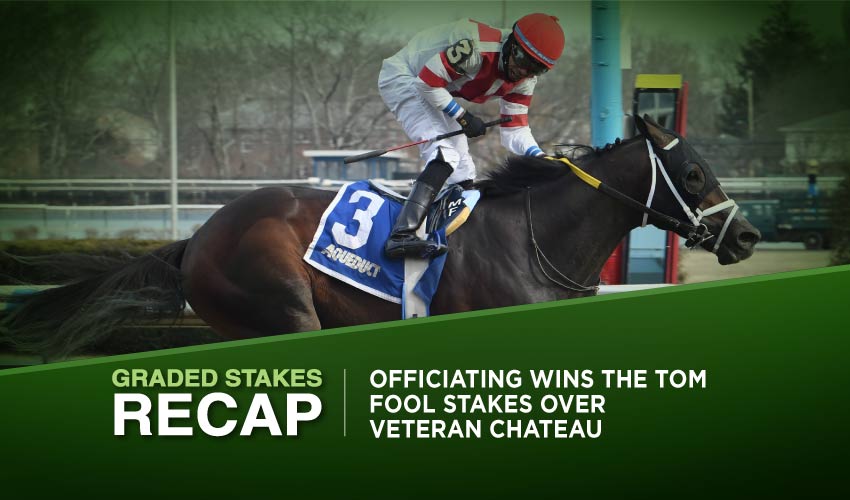 Besides the Gotham Stakes, Saturday’s card at the Aqueduct Racecourse offered other two races worthy of our attention as in the Listed Busher Invitational Stakes, 50 points towards the Road to the Kentucky Oaks were up for grabs. However, they didn’t go to the favourite, Radio Days, but to talented yet underestimated Venti Valentina, who is currently second on the leader board with 54 points, topped only by Secret Oath. The G3 Tom Fool Stakes then saw a triumph of four-year-old Officiating over veteran Chateau.

The G3 race held at the distance of six furlongs initially resulted in a duel of two, the biggest weight carrying rivals; however, Officiating (57-10) drew clear quickly from preferred Chateau (1-2) to snatch most of the purse of $200,000. On the dirt surface, seven-year-old Chateau was expected to become a back-to-back winner in the field of four-year-old and older horses, given he won a Listed race last time out; moreover, he can always rely on his superb early speed.

Chateau, indeed, sprinted away from the starting gate, attempting another gate to wire victory, while when turning for home, he had a certain advantage over the rest of the field. Still, Officiating was creeping close inch by inch. The four-year-old colt trained by Saffie A. Joseph jr. looked, at least to us, like the most serious threat for the favourite, which proved right; still, the bay a bit struggled with the pace, being encouraged by his jockey Manual Franco since halfway through the race.

Officiating overcame the trouble subsequently, got closer to the leader, and as Chateau was weakening in the final stretch, his younger rival swept by him to record his second G3 win in 1:12.22 after pulling away from the favourite to leave him behind by 5 and a half of a length. Chateau held on to second in front of third Repo Rocks (9-2).

50 points towards the Kentucky Oaks and the purse of $250,000 were up for grabs in this Listed dirt race held at the distance of one mile. Five three-year-old fillies clashed in the event, and like in the Tom Fool Stakes, the favourite was denied here as Venti Valentine (53-10) took the spoils quite comfortably.

The Jorge R. Abreu trained chestnut bagged a black-type win and finished second in the G2 Demoiselle Stakes, so she should’ve been perceived as the second chance of the race, but she delivered much more decisive performance than could’ve been even expected. Manual Franco once again let his mount gallop in the field, then urged Venti Valentina to improve her position on the outside, so once the fillies turned for home, the chestnut filly had enough space to rally forward.

After she got in front of front-running Magic Circle (24-5), her victory was inevitable; still, she kept drawing away from the rest of her rivals to score by impressive seven lengths in 1:39.65. The daughter of Firing Line definitely boasted some talent here, and we’re eager to see what more she’s capable of. Magic Circle didn’t keep the second place as Shotgun Hottie (23-1) seized it, while preferred Radio Days (1-2) had no bright moment in the race and was well beaten in the final turn.