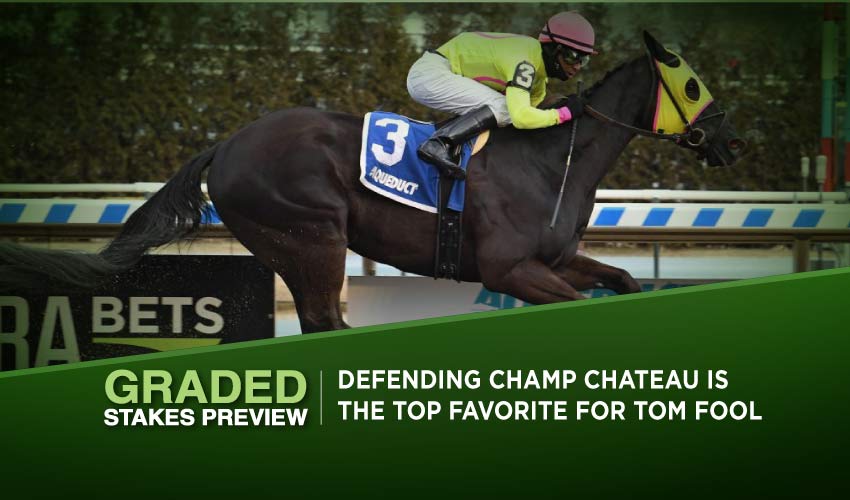 Aqueduct will host the G3 Tom Fool which is open to four-year-old and older sprinters, meeting seven-year-old Chateau attempts winning for the second time in a row, while facing a quartet of four-year-old rivals also at Aqueduct the Busher Invitational Stakes where three-year-old fillies will compete for 50 points towards the Road to the Kentucky Oaks.

The G3 was known as the Tom Fool Handicap, but for its 2022 edition, it’s run as a conditional with the purse of $200,000 up for grabs. A field of five four-year-old and older horses is about to cover the distance of six furlongs on the dirt surface, while seven-year-old Chateau aims at becoming a back-to-back winner of the Tom Fool Stakes.

The Rob Atras trained gelding entered last year’s race as one of the least carrying participants; still, he’s a solid G3 runner under all circumstances as besides the victory, he gathered a couple of third place at the G3 stage; moreover, he finished fourth in the G1 Carter Handicap and concluded the season of 2021 with a triumph in the Listed Gravesend Stakes.

Chateau used his early speed brilliantly back then, settled at the front, and then held off a finishing rival to secure a fine victory; however, he’s yet to show up in 2022. He should benefit from his affinity towards the Aqueduct Racecourse, yet, the biggest weight in the field could stop him, which also applies to four-year-old Officiating.

It took some time before the son of Blame broke his maiden, but soon after, it became clear that Officiating could be a useful black-type performer as he ran in second among such a company in March and then scored a black-type victory in September on the way towards his premiere Graded win – G3 Mr Prospector Stakes in December.

Leaving highly preferred Endorsed behind back then; Officiating tried his luck at the same stage also in 2022; however, the mile distance might’ve been too much in Fred W Hooper Stakes. He hasn’t run over six furlongs for some time, so we’ll see how he’ll like it.

The remaining trio of four-year-old colts should benefit from carrying less weight than the mentioned duo; moreover, all of them can deliver a good effort in a G3 race. Repo Rocks finished second in the G3 Toboggan Stakes last time out, Timeless Bounty scored a Listed and could appreciate Saturday’s trip, while Prime Factor took third in last year’s Holy Bull Stakes. He failed to show off in the subsequent Kentucky Derby trial, but in his 2022 debut, he won an Allowance comfortably by more than three lengths.

Our betting pick for the Toom Fool Stakes is Chateau, who’s shown he can carry big weight and still deliver

The one-mile long race offers the purse of $250,00 and attracted a field of six three-year-old fillies who will meet on the dirt surface here. Radio Days is the leading chance as the Claude R McGaughey III. trained bay finished a respectable second place in the G3 Forward Gal Stakes behind talented Girl With a Dream.

She left behind other interesting fillies who switch for the turf this time, so she’s about to face new rivals; however, if she repeated the performance from February, she should at least fight for the win. Moreover, she had showed off her talented already in her second start when she destroyed the maiden competition by more than eight lengths.

Radio Days is yet to cover the mile distance but she just seemed quite capable of it like Magic Circle who even managed to win at the distance of a mile and a furlong. Last time out, she scored the black-type Busanda Stakes thanks to her front-running tactic but it happened after she suggested her talent in the G1 Frizette Stakes, where she was fourth, and the G2 Demoiselle Stakes, where she finished third. Still, she got bettered by more carrying Venti Valentine who ran just for the third time back then.

Her effort wasn’t surprising as she had delivered in the black-type race prior to it. In other words, Venti Valentine just ran a great race in the G2 Demoiselle Stakes despite the fact she wasn’t much experienced, and it won’t be a shock by if she improves also for Saturday’s race. Unlike the favourite, the Jorge D. Abreu trained filly has already proved to handle a mile easily.

Shotgun Hottie, the narrow winner of a black-type race, is basically the only filly in the field whose victory would cause an upset as the remaining duo does look good in terms of chances, too.

Our top pick for the Busher Invitational Stakes is:

Radio Days as she should be fresh and fit for the race. We also like Venti Valentine, yet it’s been some time since she’s hit the track, so we’ll stick with the favourite.