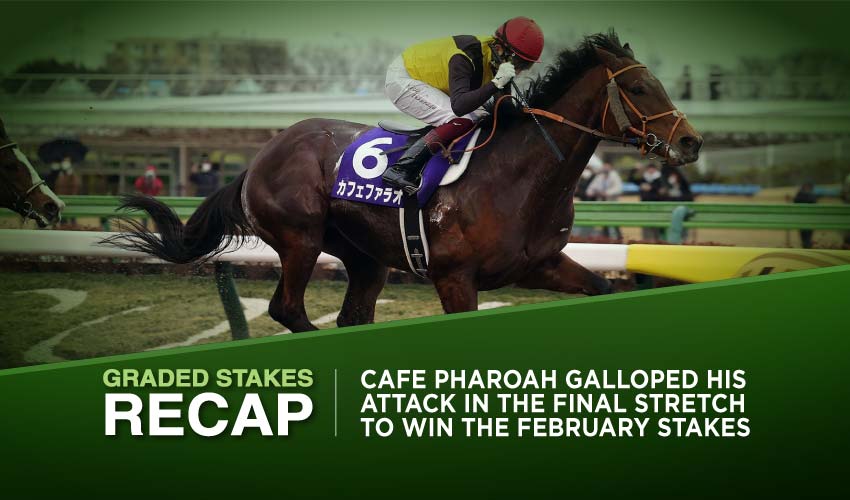 The mile-long pinnacle of Saturday’s card at the Tokyo Racecourse attracted a field of 16 four-year-old and older horses who competed for the purse of 232,980,000 Yen. On the muddy, dirt surface, the winner of a trial, T M South Dan (79-10), had a great start from an outside gate and aimed for the front, trying to score his premiere G1 triumph by an offensive tactic.

And it almost worked out as the five-year-old horse remained first until the very end, and still going strong; he repelled any Sodashi’s (36-5) attempts of getting closer; however, he just couldn’t answer finish that Cafe Pharoah (41-10) unfolded in the centre of the track. The last year’s winner trained by Noriyuki Hori lacked his spark in the following outings; thus, he wasn’t expected to strike the February Stakes for the second time in a row, but his team timed his form perfectly as well as the jockey, Yuichi Fukunaga, timed his finish immaculately.

Five-year-old Cafe Pharoah spent the race in the midfield but quite close to the front, and because the son of American Pharoah galloped on the outside, nothing was stopping him from launching his attack in the final stretch. In his typical and easily recognizable motion, Cafe Pharoah smoothly left Sodashi behind, upon which he passed by leading T M South Dan and drew clear from him to record his second G1 victory.

Not only did Cafe Pharoah become the second horse (after Copano Rickey in 2014 and 2015) to score the February Stakes for the second time, but he also broke the record of the race, crossing the wire in 1m 33.80s. T M South Dan lost to the winner by two and ½ of a length; still, he delivered a spirited performance and finally confirmed he belongs among such a company, bettering even popular filly Sodashi.

Regarding the four-year-old white star, she ran a good race, too, after being disappointing in two outings. This time, she galloped close to the front once more, and even though she didn’t get past T M South Dan, she held off finishing rivals and grabbed third place.

Soliste Thunder (8-1) made amends for his lacklustre effort in the trial and secured a good fourth place in the February Stakes as outsider Time Flyer (61-1) took the last piece of the purse. Preferred Red le Zele (29-10) faced some issues with the lack of space in the final stretch, lost his stride several times, and once he could actually go forward, it was too late. He crossed the line in sixth.

Follow us on Social Media for instant Cafe Pharoah updates!