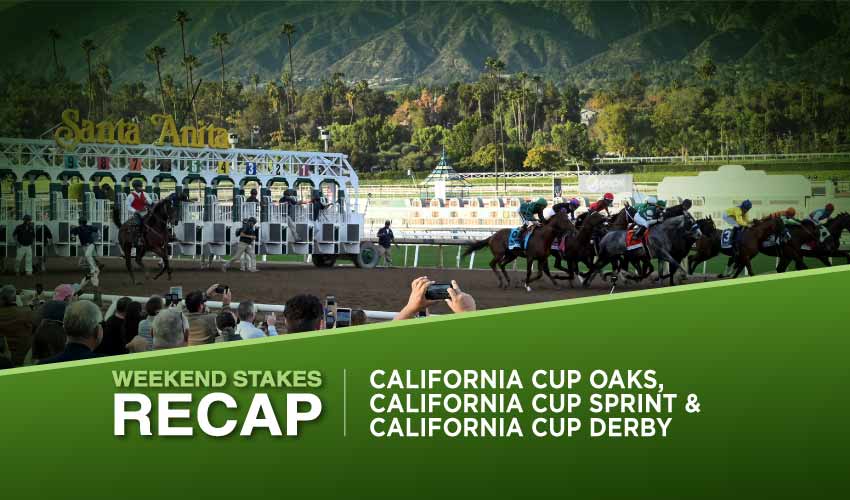 The state-breds stakes-heavy card at Santa Anita on Saturday produced plenty of excitement, with the feature California Cup Derby falling to Fast Draw Munnings after a thrilling stretch duel. Rose Dawson produced a dazzling turn of foot to win the California Cup Oaks, and Brickyard Ride was just as speedy when taking the California Cup Sprint for the second successive year.

Fast Draw guns them down

Pace makes the race, they say, and it certainly influenced the outcome of the California Cup Derby at Santa Anita on Saturday. The odds-on favourite Straight Up G didn’t get the easy lead that brought him success last time, which enabled Fast Draw Munnings to play a stalking role to perfection and flip the form from their previous meeting.

Highland Ghost went to the lead with Straight Up G at his shoulder, but chasing the pace softened up Straight Up G and although he fought bravely down the stretch Fast Draw Munnings ran him down inside the final sixteenth, taking his measure by a neck in a time of 1:47. The Jeff Mullins-trained winner paid out at $10.40; the never-dangerous Finneus was three and a quarter lengths back in third.

“I’ve always loved this horse,” said winning rider Drayden Van Dyke. “He doesn’t give you all that he has but he showed what he could do today, and I’m proud of him.”

There were plenty of questions regarding Rose Dawson before the California Cup Oaks but the Phil D’Amato-trained filly had all the right answers, maintaining her unbeaten record with a devastating back-to-front stretch run.

This was Rose Dawson’s debut on turf, her first try beyond five and a half furlongs and a big leap in class, and for much of the race it all looked too much for her. Until, that is, Flavien Prat switched the 9-2 third-choice to the centre of the track at the top of the lane and she took off, surging past rivals to lead at the sixteenth pole and wrap it all up by a length from Big Novel, stopping the clock in a tick over 1:36 with the favourite Vivacious Vanessa a length and a half away third.

Twelve months ago Brickyard Ride led at every call to win the California Cup Sprint. On Saturday he did it again, underlining his affinity for Santa Anita, where the Craig Lewis-trained five-year-old is now nine-for-13 lifetime.

The 8-5 favourite was out of the gate in a hurry under Juan Hernandez and was soon on the lead, and never looked in any danger of being caught. He was four lengths clear in mid-stretch and Hernandez was able to take it easy through the final sixteenth, with Brickyard Ride crossing the line a length and three-quarters clear of the rallying Positivity in a time of 1:09 and one-half. Letsgetlucky, who was closest to the winner through the first half-mile, faded in the closing stages to be third, another length and three-quarters further back.

Follow us on Social Media for Santa Anita updates!