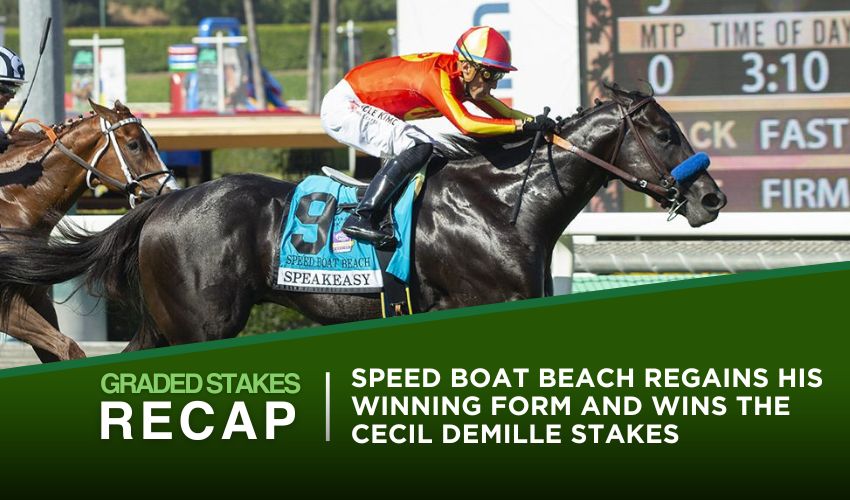 Eight runners went to the gate for the Grade 1 Matriarch Stakes on Sunday at Del Mar with Gold For Kitten and Wakanaka being scratched late on, which looked to make it an easier task for the strong favorite Regal Glory.

As the gates opened, Mike Smith had one thought on his mind on Hamwood Flier and that was to get to the speed and make the others play “catch me if you can”

The eventual winner REGAL GLORY was off a bit slow from her wider gate, but Flavien Prat moved his horse up on the clubhouse turn and pitched inside to get a good position in the two-lane.

Meanwhile, Smith shook clear on Hamwood Flier and was already four to five lengths clear entering the backstretch. The opening quarter went in 23.58 secs and a blistering half mile went in 46.12 sec.

As the filly blasted away in front, Eddies New Dream and Dolce Zel settled behind the pace, with Prat having a perfect position on Regal Glory in the fourth spot, as they went through the half mile, the leader was 7 lengths clear and not stopping.

Meanwhile, the other runners (England’s Rose, Pizza Bianca, Bipartizanship and Avenue De France) were at least 12 lengths off the speed.

Off the far turn, the pack began to close and as they entered the stretch, Smith’s filly was now only four lengths clear. It was here Prat said go on the favorite and she blew on by the long-time leader and cleared right away to win by five and a quarter lengths at the wire.

Hamwood Flier got edged out of the top three right on the wire by England’s Rose and Pizza Bianca, but this was all about the class of Regal Glory.

8 foes proceeded to post for the Grade 3 Cecil B.DeMille Stakes for two-year-olds and the horse that was on everyone’s lips was Speed Boat Beach who was sent off the heavy chalk. Everybody was amazed at his record-breaking debut win, but could he get back on track here after being well beaten in the Breeders Cup?

As the gates opened, Flavien Prat had no intention of hanging around on the favorite and he went to the front with Game Time. As they crossed to the fence, First Piece drifted with them and caused Kolomio’s rider to rein back his headstrong mount.

As they came out of the clubhouse turn, there was more scrimmaging at the back as Ransomware collided with Ze’Bul.

Out of the clubhouse turn and Game Time and eventual winner SPEED BOAT BEACH settled together on the speed and went through the quarter in 22.82 secs and the half in 47.3 secs, and at this point, the pace had slowed, meaning only six lengths covered the field.

As they hit the top of the stretch, Prat said go on Speed Boat Beach and he got a half-length clear, but Game Time was battling bravely on the inside and the two set down for a great battle to the wire.

They were neck and neck entering the final furlong but the favorite edged ahead as they approached the wire to win by half a length with First Piece holding onto the show spot from the late rallying Ah Jeez who never really landed a blow.

Stay tuned for the latest Kentucky Derby Odds. Check out the Horse Racing Results and don’t forget to Sign-up and get up to a 10% horse rebate. We offer the best horse rebate, in the Industry!