Chad Brown strikes again with Masen in the 2022 Poker Stakes 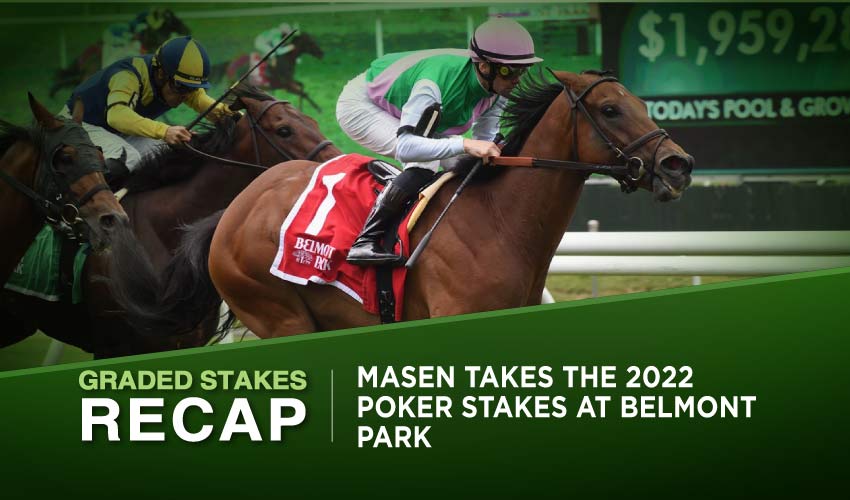 Last weekend Chad Brown ruled the roost at Belmont Park with four G1 winners; this weekend the pickings were thinner at the New York circuit but the local hero still made off with the only Graded contest on Saturday’s card, sending out the progressive Masen to win the G3 Poker as a heavy favorite.

There are not many gaps on Chad Brown’s resume when it comes to east-coast Graded turf stakes, and the New York native filled in another one when hot favorite Masen gave him his first victory in the Poker, the highlight of Saturday afternoon at Belmont Park.

Brown – currently the world’s leading trainer going by the influential Thoroughbred Racing Commentary’s global rankings – hasn’t put a foot wrong in recent weeks and neither did Masen, who made his Graded-stakes breakthrough with a polished performance that hinted at bigger days to come.

The 1-5 favourite sat behind the pace set by Wolfie’s Dynaghost, running a little rank through the first furlong before settling, until moving to the lead at the top of the lane and soon putting his stamp on affairs, driving on under a vigorous ride to win by a length. The game Wolfie’s Dynaghost held on to second spot by a nose from Masen’s late-running barnmate Public Sector; they covered the mile in 1:34 and one-fifth.

“He broke well, but when I asked him to switch off it took him a little while,” said jockey Flavien Prat. “He has a great turn of foot, so I wasn’t so worried about the slow pace, it was only a matter of getting him to switch off. After that, I was fine.”

Brown has a barnful of brilliant turf fillies and mares headed by the unbeaten Bleecker Street and Regal Glory, but has also been making hay this spring with his colts, headed by Preakness winner Early Voting, Kentucky Derby third Zandon and G1 Woody Stephens winner Jack Christopher. Masen, for whom this was a third start Stateside after going three-for-six in Ireland, including a victory at stakes level over seven furlongs, is not yet in that exalted company but is well on his way.

On his US debut he was beaten just a nose in the G1 Maker’s Mark Mile at Keeneland, and Brown is in no doubt that the gelding belongs at that level, planning his summer around an assault on the G1 Fourstardave at Saratoga on August 13, which is incidentally another notable omission on the trainer’s record.

“He ran back just inside a month, which is a little tight for him, but I wanted to get another race in him between now and the Fourstardave,” said Brown, who also noted that third-placed Public Sector – like Masen, a son of leading British stallion Kingman – was running at the very minimum of his distance capabilities.

“Public Sector needs a little more pace to run at. He just missed second by a nose and was coming along steadily. I think he prefers a mile-sixteenth and a mile-eighth anyway.”

Follow us on Social Media for 2022 Poker Stakes odds & updates!