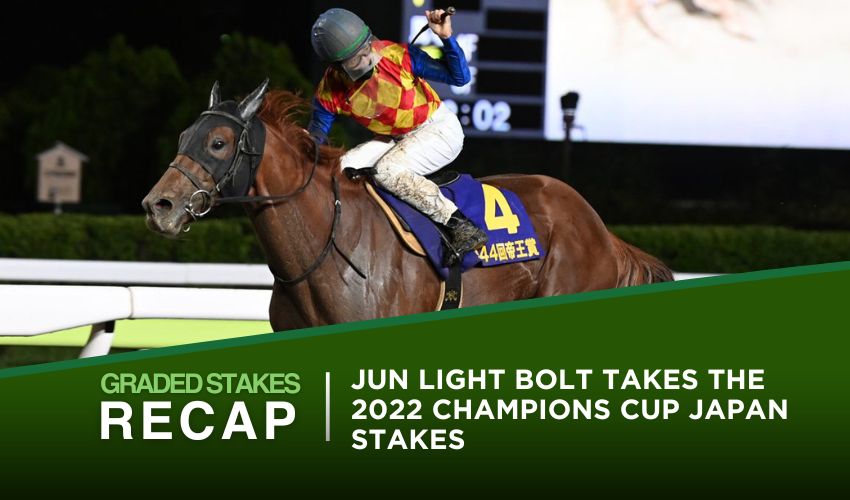 Sunday’s card at the Chukyo Racecourse offered especially the G1 Champions Cup Japan Stakes for the best dirt horses in Japan. Although hot favorite T O Keynes failed to repeat his 2021 triumph, the finish was a thrilling one as Crown Pride was only narrowly denied a surely deserved victory by five-year-old Jun Light Bolt.

On Saturday, So Valiant scored the G3 Challenge Cup for the time in Hanshin, while Silver Sonic triumphed among super stayers in the G2 Stayers Stakes in Nakayama.

Sometimes you have races where you, just by a single look, spot a horse who is class above the rest of the field. It was the case of So Valiant (9-10) in this year’s Challenge Cup over a mile and two furlongs as the four-year-old colt looked marvelous since he left the gates, and even prior to that, given he was the preferred participant for this G3 turf race.

Vying for the purse of 82,510,000 Yen, So Valiant galloped not so far from the front, and under Christophe Lemaire, he patiently waited for the cue that he received in the final stretch. Once the jockey urged him forward, the Masahiro Otake trained colt switched gears, seized the front, and didn’t allow an upset as he scored comfortably in 1m 57.50s, leaving second Ruby Casablanca (93-10) in second by one and ¾ of a length. Echt (122-10) snatched up a close third place.

So Valiant is still a relatively unexposed four-year-old colt with two Stakes victories and two G3 victories under his belt, in other words, with two triumphs in the Challenge Cup under his belt as the son of Orfevre came on top here in two consecutive years.

However, he recorded only thirteenth place in between the two triumphs as he was resting throughout most of the season to return in the G2 All Comers Stakes in September. Although he didn’t show basically anything then, he was expected to improve significantly for the Challenge Cup, which he did.

He boasted his class when easily resisting a finishing duo of Ruby Casablanca and Echt, who both were places contenders and delivered their standard performances.

The purse of 119,900,000 Yen lured in a field of fourteen runners to cover the extra-long distance of two miles and two furlongs. The G2 turf race welcomed several smart stayers, including Silver Sonic (22-5), who also had enough luck to score under Damian Lane.

After a good start, the six-year-old grey settled close to the front, and even though he lost the position subsequently, his jockey kept hoping for a gap to open at the fence. And it did. The Yasutoshi Ikee trained horse perfectly used all the room he was left with in the final turn, and once he could squeeze himself forward in the stretch, he didn’t hesitate, suddenly seized the front, and crossed the wire in 3m 46.30s.

Plume D’Or (41-5) was flying home on the outside and had been the race a few yards longer, she would’ve triumphed. However, she finished second by ¾ of a length, with the last year’s winner, Divine Force (57-10), taking third place.

Silver Sonic has been looking like a talented stayer for some time as in 2021, he scored a Listed and finished third in the Stayers Stakes behind Divine Force, and in the ongoing season, the son of Orfevre added a third place in the G2 Hanshin Daishoten.

Last time out, he failed to finish a race in May, though, so there were some questions concerning the grey’s long pause since the last outing, but Silver Sonic denied any doubts. Besides the winner and the third to cross the wire, second Plume d’Or also gave a lovely run as the four-year-old filly swung by almost all her rivals in the final stretch.

It was enough only to run on in second, but she needs to be hugely respected over extra long distances the next time. The potential is there.

The dirt specialists lined up in this G1 race over a mile and a furlong to compete for the purse of 232,920,000 Yen, while it was progressive Jun Light Bolt (69-10) who landed the spoils under Yukito Ishikawa.

The five-year-old quickly jumped out of the gates, but the jockey took him back to the midfield, where the horse spent most of the race. However, the Yasuo Tomomichi trained bay improved his position in time, didn’t let himself get boxed in, and once the closing stages approached, Jun Light Bolt was literally flying on the outside.

The victorious son of King Kamehameha belonged among the anticipated runners of the Champions Cup, given he has been in fine form since July. In 2022, he achieved a Listed triumph followed by the G3 Sirius Stakes success, where he prevailed over mentioned Hapi, and despite being already a five-year-old, he has been showing signs of reaching her career peak right now.

Not only did Jun Light Bolt finally fulfill hopes put into him, but he also helped his jockey to land his first G1 race.

Second Crown Pride was only narrowly robbed of his first win among the elite; still, his performance gave his connections a needed boost for the things to come for the three-year-old. As the bay scored in the G2 UAE Derby, he then failed to impress in the Kentucky Derby, and upon his return to Japan, he took only two second places in Listed.

His Sunday effort affirmed that he is a classy dirt horse who could try his luck abroad again. Third Hapi also ran a great race as another three-year-old in the field; moreover, alongside Jun Light Bolt and Crown Pride, he defeated fourth T O Keynes.

The preferred five-year-old attempted to become a back-to-back winner of the Champions Cup Japan Stakes and had every chance to do so in the final stretch; however, he could get moving properly to at least fight for the win. He finished a lackluster fourth and didn’t resemble the class-oozing specimen he was in 2021.

Stay tuned for the latest Kentucky Derby Odds. Check out the Horse Racing Results and don’t forget to Sign-up and get up to a 10% horse rebate. We offer the best horse rebate, in the Industry!