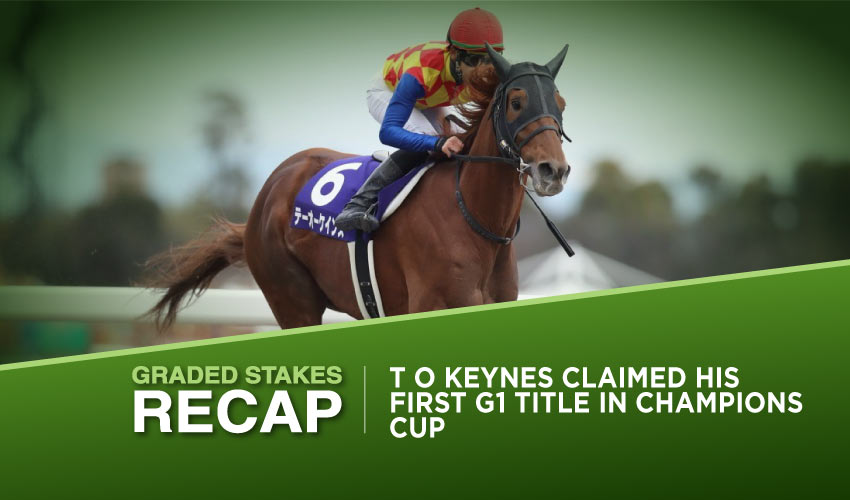 Another highlight of the Japanese season knows its winner as white Sodashi failed to deliver even in the Champions Cup on the dirt track, totally outshined by a super performance of progressive chestnut T O Keynes. Besides this G1 run in Chukyo, racecourses in Hanshin and Nakayama also brought some exciting Grade races, resulting in victories of three-year-old So Valiant and five-year-old stayer Divine Force.

The G3 turf event for three-year-old and older horses was held at a mile and a furlong distance, while most of the purse of 77,860,000 Yen went to the connections of preferred So Valiant (7-10) in the end. The three-year-old colt trained by Masahiro Otake collected some fine prizes at the Grade scene in 2021 and looked capable of striking gold here, which he did quite impressively. So Valiant broke away quickly and piloted by Christophe Lemaire, the bay settled in second, where he spent the whole race until the final stretch.

The beautifully moving colt then took command and began drawing clear from his rivals, who basically couldn’t hold a candle to the talented son of Orfevre. So Valiant crossed the wire in 2m 1.00s with the advantage of 3 and a half of a length to finishing Heat On Beat (8-1), who displayed an eye-catching turn of foot in the final stretch and managed to hold off rallying Persian Knight (9-1).

At the distance of two miles and two furlongs, Ryo Terashima’s charge Divine Force (67-10) caused a mild upset when bagging the G2 turf race with the purse of 119,820,000 Yen. The five-year-old horse hasn’t has a Grade success under his belt until now, but he ran a terrific race at the Nakayama Racecourse on Saturday, winning by a half of a length aboard with Hironobu Tanabe.

The bay son of Workforce galloped at the rear of the field in the first part of the race; subsequently, he improved his position; still, he had to turn wide for home to have a say in the final stretch. Such a manoeuvre proved fruitful as Divine Force had plenty of space to charge for the lead, and he, of course, used it to close on the leader and pass him by in time. Divine Force bagged the race in 3m 47.60s before front-running Iron Barrows (54-10) and third Silver Sonic (56-10).

None of the most anticipated horses impacted the result of the race much, but as the Stayers Stakes was foreseen as a wide-open contest, their failure wasn’t that shocking.

Popular white filly Sodashi (7-2) failed to deliver a performance similar to the one she put on in the 1000 Guineas once again as she looked enthusiastic in her first start on the dirt surface, yet, the G1 event over a mile and a furlong wasn’t a place for her redemption. After galloping at the front, she weakened in the final stretch and was utterly outshined by four-year-old chestnut T O Keynes (23-10), who struck gold in this 119,820,000 Yen event.

Ridden by Kohei Matsuyama, the remarkably improving colt spent the race close to the leader, and once he found some space to rally forward in the final stretch, he powered clear to the first place and proved uncatchable for all of his rivals. He bagged his premiere G1 victory in 1m 49.70s by an impressive margin of 6 lengths. Previously fourth and first in the Champions Cup, six-year-old Chuwa Wizard (18-5), ran another great race here to secure second place in front of outsider Another Truth (1141).

Inti (177-10) hit the board in the Champion Cup for the third time in a row, finishing fourth well ahead of Sodashi, who crossed the line in the 12th.

Sign up and get a 10% rebate. Make sure to stay tuned for the latest Horse racing odds, Racing entries and Races results.

Follow us on Social Media for instant Champions Cup updates!