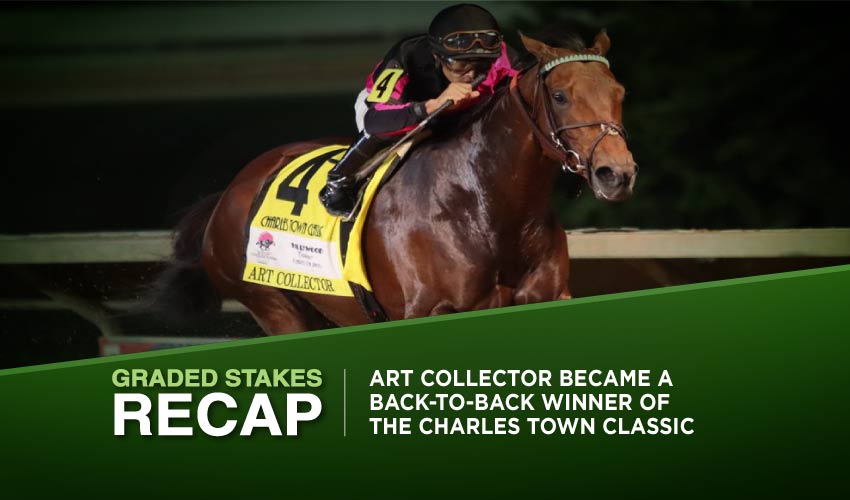 Friday’s card at the Charles Town Race Course saw a couple of Graded races, while the favorites oozed class in both of them. At first, chestnut Society struck gold in the G3 Charles Town Oaks after putting on a commanding performance among three-year-old fillies. Subsequently, Art Collector became a back-to-back winner of the G2 Charles Town Classic, leaving the rest behind easily.

Eight three-year-old fillies hit the dirt track to compete for the purse of $500,000 in this G3 race. The Steven Asmussen bound Society (7-5) was the preferred participant to cover the distance of seven furlongs victoriously, which happened as the Gun Runner daughter didn’t give her rivals a chance.

She had a great start, settled at the front, and piloted by Tyler Gaffalione; she galloped first throughout the whole race. Later on, Free Like A Girl (19-5) joined her; however, once the jockey urged Society to quicken up, the rest of the field looked like they were left standing still. Society bolted forward to triumph by six and ¾ of a length in 1m 23.42s. Free Like A Girl crossed the wire in second before Midnight Stroll (37-10).

It was the fourth success for Society as she bagged her debut and also prevailed in an Allowance and black-type races. Subsequently, she showed up in the G1 American Oaks, where she trailed home in fourth, but on Friday, she benefited from the drop in the class, and her performance definitely suggested she should be capable of running well, at least at the G2 stage, too.

Free Like A Girl didn’t disappoint as well and handled the unfavorable draw decently, while the biggest weight-carrying Midnight Stroll grabbed a solid third place.

The G2 dirt race lured in a field of eight three-year-old and older horses who covered the distance of a mile and a furlong. Vying for the purse of $1,000,000, Art Collector (1-2) was expected to repeat his last year’s triumph, and he did so impressively. Under Luis Saez, he quickly left the gate, seized the front and galloped at the fence the whole event, followed closely by the local star, Muad’Dib (12-1).

At the final turn, the William Mott bound favourite kept drawing clear from his rivals, upon which Art Collector cruised home, unchallenged, to score the Charles Town Classic for the second time in a row. Crossing the wire in 1m 51.30s, he left second Muad’Dib behind by four and ¼ of a length, with Mind Control (33-10) taking third place.

Art Collector, the five-year-old son of Bernardini, didn’t shine both at the Breeders’ Cup and Saudi Cup meetings; however, he’s ensured some joy for the connections thanks to his exploits in the G1 Woodward Stakes and the pair of triumphs in the Charles Town Classic.

Art Collector may once again aim now at the Woodward Stakes in October. Although Mind Control should’ve been the primary opponent to the favorite, he had to settle for third as five-year-old Muad’Dib showed he’s not just a local star but more than capable of running well against Graded performers in general. Jeff Runco has an excellent and gutsy horse in his stable.