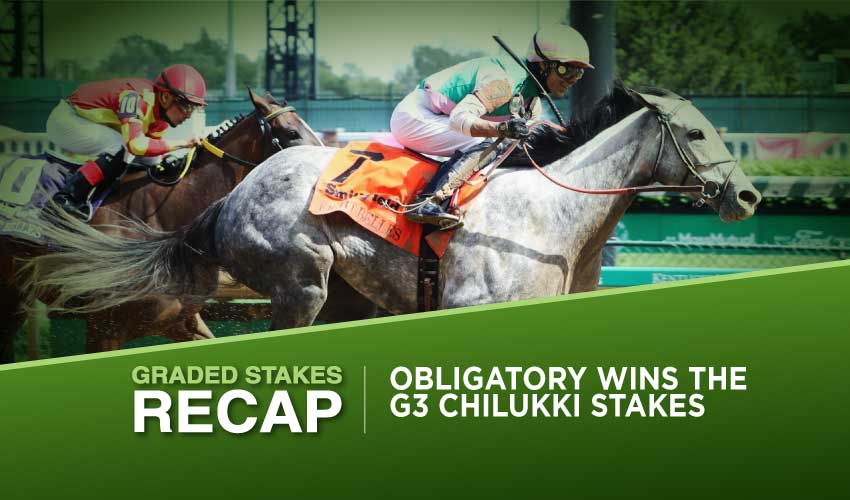 As winter moves into position on the calendar so the action at Churchill Downs steadily draws to a conclusion for 2021, but there was still time for a performance to light up the short afternoons of late fall when Obligatory routed her rivals in Saturday’s feature Grade 3 Chilukki S., confirming her as one to watch out for next spring. Here we have the ChIlukki Stakes Recap.

The iconic pink, green and white silks of Juddmonte Farms – think Frankel, Arrogate, Dancing Brave – may be seen less often on the track following the death this year of owner Prince Khalid Abdullah, but they are always the hallmark of quality and that was underlined when Obligatory ran out a dominant winner of the Chilukki S., the highlight of the card at Churchill Downs on Saturday.

The Bill Mott-trained grey filly was the lone three-year-old in the seven-runner field and the 3-2 favourite to see off her elders, following a productive campaign in which she was twice Grade 1-placed in the Acorn and the Cotillion and won the Grade 2 Eight Belles here at Churchill in April. The Chilukki S. represented a drop in class and Obligatory outdrew the opposition in encouraging fashion.

Joel Rosario sat chilly in fifth place on Obligatory as Princess Causeway set sizzling fractions from her outside post, and when the trailblazer fizzled out around the turn it was Matera and California invader Miss Bigly who went to the head of affairs at the top of the lane. Obligatory was coming fast, though, and Rosario brought her six wide on the home turn before moving up to join the duelling leaders in mid-stretch.

Obligatory put them away with the minimum of fuss and cruised clear under a hand-ride to win eased down by two and a quarter lengths, stopping the clock in 1:34 and four-fifths. Matera and Miss Bigly continued their battle to the wire, with the former grabbing second spot by a neck. Sally’s Curlin, winner of the Chilukki S. in 2019, was a never-at-the-races fifth.

“She gave me a really good effort closing into the pace,” said Rosario, for whom this was the fourth win of a memorable afternoon. “Around the turn she started showing her best turn of foot and I could see the pace was pretty fast in front of me. It was fun to be on her.”

This victory gave Obligatory, a homebred daughter of Curlin, a lifetime record of three-for-nine, and with her best likely ahead of her given her age and profile the only thing missing on her resume is a Grade 1 score. She stays in training in 2022 with that objective.

“The pace ended up helping us today and she got a really good run on the outside,” said Garrett O’Rourke, general manager of Juddmonte USA.

“Joel got her into a lovely rhythm and always felt like he was in a good position with her. She’s going to stay in training next year and the goal would be to get a Grade 1 victory with her.”

Sign up and get a 10% rebate. Make sure to stay tuned for the latest Horse racing odds, and racing entries and check out the Kentucky Derby Future Book 2022.

Follow us on Social Media for instant Churchill Downs and Chilukki S. news!