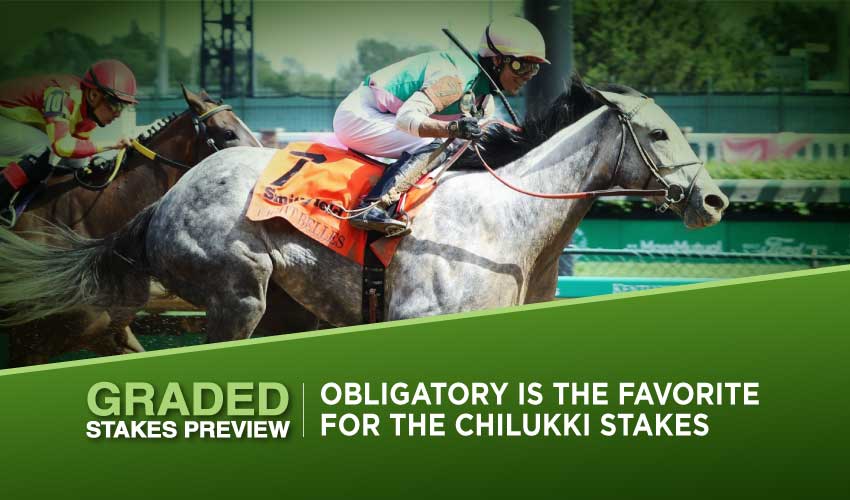 The Churchill Downs fall meeting continues on Saturday, with the feature Grade 3 Chilukki Stakes drawing a competitive group of fillies and mares, notably Grade 1-placed Obligatory – the sole three-year-old in the field – and 2019 winner Sally’s Curlin.

Two years ago the world was a very different place and Sally’s Curlin was the winner of the Chilukki, the feature event at Churchill Downs on Saturday, completing a hat-trick that hinted she might be going somewhere fast.

Those fond of the ‘history repeating itself’ angle should note that she has only won once since then and is on a nine-race losing streak, but last time out she would have won an allowance optional claimer at Keeneland in two more jumps and she could be coming back to the boil. Its Cold In Dehere, who has run 31 times and never even started in a stakes race let alone a Graded, was two and a quarter lengths back in third in that Keeneland contest, although on the plus side she is four-for-eight under the twin spires.

After a three-race winning streak that included two stakes races, notably at Ellis Park when Sally’s Curlin was well in arrears, Matera was dropped into deeper water in the Grade 3 Locust Grove here in September and ran as well as could have been expected when fourth behind top-ranker Shedaresthedevil. A repeat of that level of performance would put her right in the mix.

If she can be forgiven a leaden effort last time when she never got running at all, Obligatory brings both the best form and the promise of improvement to the table. Her last six starts have been at Grade 2 or above, and she was runner-up behind Clairiere in the Grade 1 Cotillion at Parx Racing and behind Search Results in the Grade 1 Acorn at Belmont Park. With only eight runs under her belt she still has the scope to move up, and has a perfect record here after winning the Grade 2 Eight Belles in April over seven furlongs.

West-coast raider Miss Bigly has never been off the board in four when visiting Churchill Downs, and comes here now at the top of her game after following a stakes score at Del Mar with third place in the Grade 2 Zenyatta at Santa Anita, beaten four and a half lengths by the high-class Private Mission. She was checked in her run there, could have been closer, and this looks an easier spot.

Last-time-out Keeneland allowance winner Princess Causeway switches back to the main track after running on turf all year, but is zero-for-ten in stakes company and will find this tough along with Pass The Plate , a length and a half behind her in third at Keeneland and winless in 2021, one-for-14 in stakes lifetime. She Can’t Sing has never even hit the board in a stakes race, but her victory in an allowance optional claimer here over seven furlongs last time, when she drew off through the final quarter-mile to score by more than five lengths, suggests she’s in decent enough form to deserve another chance.

Half the field has a chance in the Chilukki, but the choice is the down-in-class OBLIGATORY, who should be given the chance to bounce back from a dull efffort last time

Sign up and get a 10% rebate. Make sure to stay tuned for the latest Horse racing odds, Racing entries and Races results.

Follow us on Social Media for instant Chilukki Stakes updates!