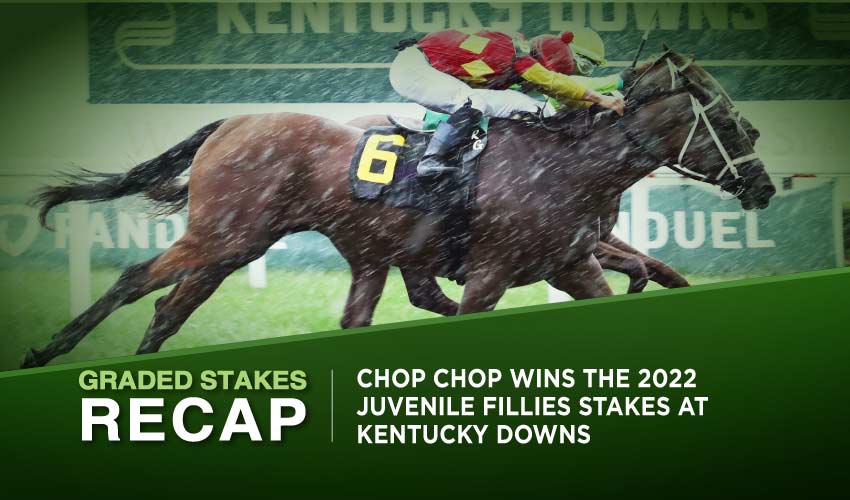 The extreme weather conditions, comprising strong wind and fierce rain, led to a decision that both Kentucky Downs Juvenile Mile and Mint Million Stakes were canceled at the Kentucky Downs Race Course on Saturday. Therefore, only 2022 Juvenile Fillies Stakes found its victress as Chop Chop became the very first Stakes winner for her sire, City of Light.

The Listed race was open to two-year-old fillies who vied for the purse of $500,000. The field of nine participants covered the distance of a mile on the turf surface, while it was Chop Chop (41-10) who struck gold for Brad Cox. The bay filly had a good start, settled in third, and upon hitting the final stretch, she briefly took command as she had to fight with Towhead (56-10) quite hard. Both fillies didn’t want to get bettered by the other one, but in the end, Chop Chop was luckier and scored by a nose in 1m 43.86s. Under Reylu Guttierez, she prevailed over Towhead, who defeated third C C Cruise Control (79-10) by abysmal nine lengths.

The Brad Cox trained Chop Chop aimed at the Saturday race with one outing under her belt as she was successful in the August maiden at Ellis Park. She had basically a perfect trip here, and because she didn’t care about the terrible weather, Chop Chop secured her premiere Stakes victory here. Towhead also delivered a great performance as the rest of the field was no match for them, including a former favorite Knockyoursocksoff (63-20), who ran in fourth.