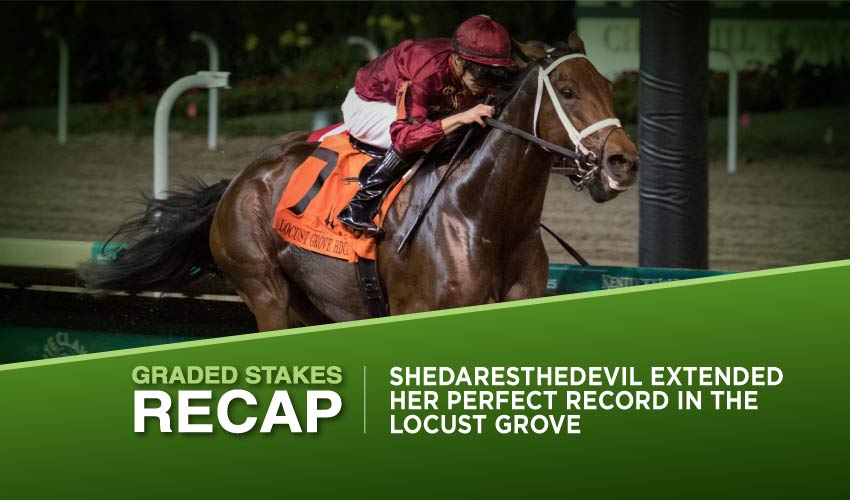 There were Breeders’ Cup clues aplenty at Churchill Downs on Saturday night, with Hidden Connection leaving the biggest impression with a runaway win. She and Major General both took the first steps along the Road to the Kentucky Derby/Oaks, scoring points that count towards a place in the May Classics.

The Road to the Kentucky Derby began at Churchill Downs on Saturday night, and Major General took the first step along the route and ten ranking points when hanging on grimly to land the Iroquois.

The Todd Pletcher-trained son of Constitution raced in mid-division until moving through to challenge on the far turn. He locked up with even-money favourite Stellar Tap until putting that rival away in mid-stretch, and was then driven out by Javier Castellano to win by a neck and three-quarters of a length from Tough To Tame and Red Knobs, covering the extended mile in 1:44 and four-fifths.

“This horse is just learning. He seemed to enjoy going two turns,” said Castellano of Major General, who paid $11.80 at the windows. The victory earned the colt a fees-paid berth to the Breeders’ Cup Juvenile at Del Mar on November 5.

There may not be many easier winners on the Road to the Kentucky Oaks than the very first, as Hidden Connection put her rivals to the sword in the Pocahontas, strolling home by nine and a quarter lengths.

Hidden Connection ($5.60) simply dazzled under the lights, the Bret Calhoun-trained filly taking over from the pace-setting Lemieux on the far turn and increasing her advantage with every powerful stride, stopping the clock in a stakes-record 1:43 and four-fifths. The distant race for second was won by Mama Rina by a neck from Goddess Of Fire.

“It’s incredibly special to get my first win at Churchill Downs aboard this filly,” rider Reylu Gutierrez told the Blood-Horse. “I waited as long as I could in the turn and she just drew away. She’s unbelievable.”

The daughter of Connect will now be pointed towards the Breeders’ Cup Juvenile Fillies on the Future Stars Friday card.

Five out of five. Shedaresthedevil extended her perfect record at Churchill Downs with a hard-fought success in the Locust Grove, going gate-to-wire and gamely maintaining her advantage over the tenacious Crystal Ball.

Shedaresthedevil ($3.20), trained by Brad Cox and ridden by Florent Geroux, had a neck to spare as the photo-finish camera clicked, with a length and a half back to Envoutante in third. The soft early fractions contributed to a time of 1:42 and four-fifths.

“She’s a very classy filly and knows how to fight to get things done. This was a good spot to get her ready for the Breeders’ Cup,” said Cox, who will send the four-year-old for the Distaff at Del Mar and a match-up with the brilliant Letruska.

Follow us on Social Media for instant Churchill Downs updates!