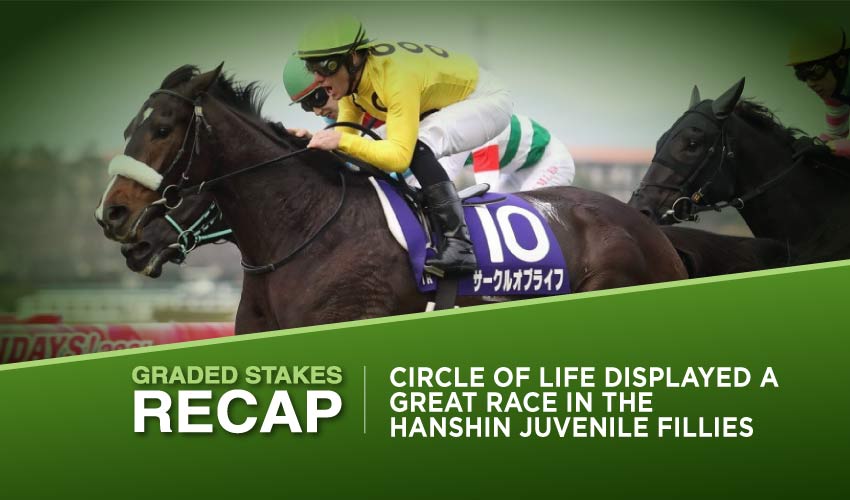 A couple of Grade races were held in Japan during the previous weekend, with the G1 Hanshin Juvenile Fillies being perceived as the pinnacle of the season for two-year-old fillies. Circle of Life displayed a brilliant turn of foot at the distance of a mile to seize the victory, leaving all of her rivals behind, while the G3 Capella Stakes at the Nakayama Racecourse meant a sure win for five-year-old Dancing Prince.

The unofficial finale for two-year-old fillies in Japan was held at the distance of a mile, and as the purse of 125,140,000 JPY was up for grabs, the G1 turf race attracted a field of 18 juniors. Although the preferred contestant, Namur (19-10), didn’t maintain her unbeaten record here, the winner wasn’t that surprising as Circle of Life (23-5) had scored the G3 Artemis Stakes previously, showing there’s some class about her. The Sakae Kunieda bound filly commenced the race at the back of the field; however, Mirco Demuro aboard kept improving her position; still, they turned quite wide for home.

Once they hit the final stretch, the jockey took Circle of Life even more outside, where the classy daughter of Epiphanea rallied forward, passing by one rival after another, and in the end, she managed to swing by the leader to achieve her premiere G1 success in 1m 33.80s. Circle of Life crossed the wire with a half-length advantage over outsider Lovely Your Eyes (50-1), who surged to the front from the midpack, while Water Navillera (56-10) sort of confirmed her claims when taking a close third place.

Preferred Namur had to settle for fourth when denied third place by a neck, while Namura Clair (109-10) finished fifth. Bella Cresta (73-10) was sixth.

While the previous race was organized at the Hanshin Racecourse, this G3 dirt race headlined the card at the Nakayama Racecourse, while Dancing Prince’s victory didn’t come out as a surprise. The Keisuke Miyata trained five-year-old horse enjoyed some successes at the black-type and Listed scene; moreover, he finished third in last year’s Capella Stakes, but this time, he managed to strike gold after a good ride provided by Kosei Miura. Dancing Prince broke away smoothly, settled in second place behind favourite Mozu Superflare (29-10), who he pursued throughout the first part of the six furlong-long race with the purse of 68,820,000 JPY.

Upon arriving at the final stretch, Mozu Superflare weakened considerably, opening thus the door to those following her, including Dancing Prince, who used the chance to the fullest, charged for the lead, and won the G3 event in 1m 9.50 with the half-length advantage. Grey Ryuno Yukina (3-1) finished second after also running quite close to the leading mare, while Omega Rainbow (98-10) showed a remarkable turn of foot when navigating between his rivals to take third place.

G1 winning mare Mozu Superflare had to settle for fourth place in her debut on the dirt surface, while Smart Dandy (121-10) was fifth.

Make sure to stay tuned for the latest Horse racing odds, Racing entries and Race results. Sign up and get a 10% rebate.