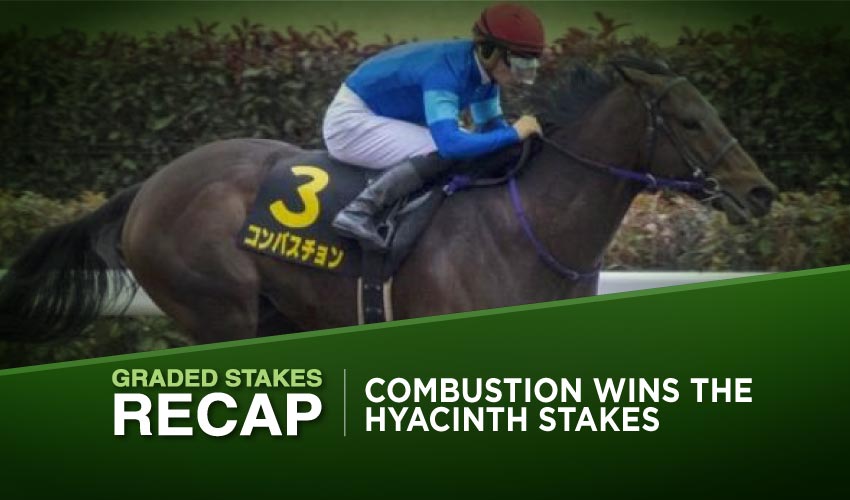 In Tokyo, the third part of the Japanese Road to the Kentucky Derby took place as the Hyacinth Stakes became quite successful for a couple of colts who had already gathered some points in the previous legs of the Road. Victorious Combustion was piloted home by Yuga Kawada; however, he hasn’t been nominated for the Kentucky Derby yet, unlike Geraldo Barrows, coming home in second.

Therefore, Geraldo Barrows officially occupies the first place of the leader board in terms of the Japanese Road to the Kentucky Derby, followed by the winner of the Cattleya Stakes, Consigliere, but were Combustion supplemented, he would top both his rivals.

On Sunday, fourteen three-year-old colts and one filly met in this Listed dirt race held at the distance of a mile. Running for the purse of 36,650,000 Yen on the dirt surface, the only filly in the field, Sea Vixen (39-1), was the quickest at the beginning and settled on the front, while Yuga Kawada led colt Combustion (7-2) ran behind her, galloping at the fence.

Although he could’ve stumbled upon difficulties with a lack of space in the closing stages, the son of Discreet Cat was fortunate enough to have a spot open for him in the final stretch. Sea Vixen was fighting hard, but she just couldn’t give an answer to Combustion powerfully rallying at the fence, going for the lead, and triumphing in 1m 35.30s.

It wasn’t at all easy for the Keizo Ito trained bay as Geraldo Barrows (21-5) surged forward in the final stretch while getting close inch by inch to Combustion, yet he came short by a neck and had to take the second place. Still, both of the colts delivered fine efforts after Combustion finished second in the Zennippon Nisai Yushun, the second part of the Japanese Road to the Kentucky Derby, and Geraldo Barrows took third in the first leg of the Road, the Cattleya Stakes. Sea Vixen held on to third.

It could be said that also fourth El Paso (80-1) confirmed a certain value of the legs of the Japanese Road because he showed up in fifth in the Cattleya Stakes, and therefore, all three participants who ran in any of the two previous legs placed in the Hyacinth Stakes despite facing interesting horses they haven’t met until Sunday.

Impressive winner of the Mochinoki Sho, Crown Pride (9-2), was one of them, but he failed to deliver on Sunday; still, he tried to unfold his finish in the closing stages. More than the sixth place was out of reach for him, though, while the favourite, Blitz Fang (3-1), was only ninth after showing some raw talent in his debut.

Sign up to get our daily horse racing news and become a winner. Check more information about Horse racing odds, racing entries, and races results.

Follow us on Social Media for instant Combustion updates!