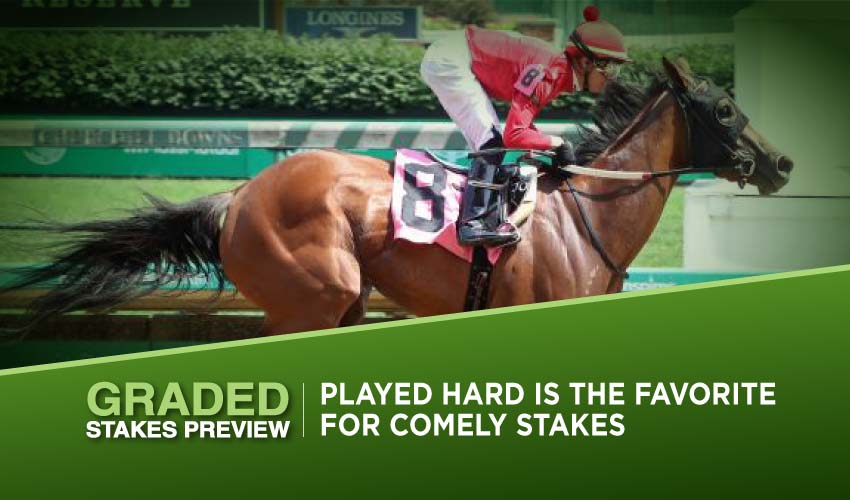 A three-day weekend at Aqueduct begins on Friday with a classy field of fillies in the Grade 3 Comely Stakes, moves on to Saturday with Mutamakina bidding for a repeat victory in the Grade 3 Long Island, and culminates with the reappearance on Sunday of track specialist Chateau, who is on the hunt for his sixth victory at the Big A in the competitive Grade 3 Fall Highweight.

The absence of morning-line favourite Army Wife, who ran instead in the Falls City at Churchill Downs on Thursday, from the Comely Stakes changed the complexion of Friday’s feature at Aqueduct, as without the daughter of Declaration Of War it lost a class act but gained a more competitive aspect.

Now the race is up for grabs, with bettors turning their attention to Crazy Beautiful (3-1), who has won four of her eight races this year and only missed the board on her two Grade 1 starts. Between March and July she collected provincial Oaks races for fun – Grade 2 Gulfstream Park Oaks, Grade 2 Summertime Oaks at Santa Anita, Grade 3 Delaware Oaks, in which she had Hybrid Eclipse (20-1) ten lengths back in fourth – and when switched to turf last time out failed by only a length to add the Grade 3 Valley View at Keeneland to her roll of honour.

On her previous outing Crazy Beautiful caught the front-running Played Hard (3-1) in the dying strides of a Churchill Downs stakes and prevailed by a neck, and although she must spot that rival an extra 4lb here her body of form is superior.

Played Hard went to Churchill off the back of fifth place in the Grade 1 Alabama at Saratoga behind Malathaat and Clairiere, and although she was soundly beaten it certainly wasn’t a bad performance on her stakes debut, especially as it was a huge step up after getting off the mark at the fifth time of asking in an allowance at the Spa on her previous start. She shapes as the pace angle and is firmly on the upgrade.

The rest of the field is playing catch-up on the front two, but they’re going the right way. Belmont Park maiden winner Shalimar Gardens (6-1) was fourth next time out in the Grade 3 Raven Run at Keeneland and is a strong option for exotics players, with improvement almost certain given that she has just four starts to her name.

Another with good claims to hit the board is stakes-race debutante Vegas Weekend (12-1), who has won her last four, culminating in an allowance optional claimer here over seven furlongs two weeks ago. That was her first start for new trainer Rob Atras after being claimed and her first for three months, and she has the potential to move up. The prospects of Bees And Honey (15-1), who was beaten in a Churchill Downs allowance on her most recent start, and Penn National allowance winner Ninetypercentbrynn (30-1) are less obvious.

The late defection of Army Wife opens the Comely right up, but the improving PLAYED HARD may get her own way on the lead and could prove difficult to pass.

Christophe Clement got the exacta up in last year’s version of the Long Island, the highlight of Saturday’s card at Aqueduct, and the local trainer is aiming to go one better this time with three in the gate.

Twelve months ago Mutamakina (3-1) got up close home to beat barnmate Traipsing by three-quarters of a length, and the mare comes here in sparkling form as she bids to defend her title. She gained her first success since the Long Island in the Grade 2 Dance Smartly at Woodbine in August, and returned to the Toronto track last time for the Grade 1 EP Taylor, in which she provided Clement with another one-two when holding off the late challenge of stablemate La Dragontea (7-2) to win by a neck.

Woodbine form is not always the strongest but Mutamakina has shown plenty of good form elsewhere. La Dragontea had previously won the Grade 2 Canadian at Woodbine and an allowance optional claimer at Saratoga, so was a worthy rival and there may not be much between them again. Clement’s third runner is Sorrel (9-2), who has been off the track for eight months since running third in the Grade 3 Orchid at Gulfstream Park and may be a little rusty.

Chad Brown is always a player in a route race on turf and his Orglandes (5-1) made the most of a step down from Graded company when coming out best in a tight finish to a stakes at Belmont Park, with Candy Flower (30-1) a length back in third. Runner-up in the Grade 3 Waya at Belmont on her previous start, Orglandes merits another chance in this higher grade and can confirm the form with Candy Flower, who has never won above allowance level.

Summer In Saratoga (6-1) showed considerable improvement last time out when posting her first Graded win in the Grade 3 Dowager at Keeneland over this distance, where she displayed plenty of determination to turn back the sustained challenge of Luck Money (5-1) and win by half a length. The bare form may not be particularly strong – Luck Money was extending her losing streak to six and is zero-for-four in Graded stakes – but both mares do at least come here in good order.

That can’t be said of lone three-year-old Harajuku (8-1), who ran well on her US debut to be third in the Jockey Club Oaks at Belmont Park, but then was never on the scene in the Grade 2 Sands Point back at Belmont, finishing last of seven. She is almost certainly better than that but can’t be viewed with confidence yet.

Trainer Christophe Clement holds the key to the Long Island, and perhaps his LA DRAGONTEA can reverse Grade 1 Woodbine form with her stablemate Mutamakina.

The Fall Highweight, the feature event on Sunday’s card, lacks a touch of quality but makes up for that with its competitive nature.

If his most recent outing can be forgiven, joint-topweight Chateau is a leading contender at a track he loves. He is five-for-ten at Aqueduct and only off the board once, when fourth in the Grade 1 Carter in April. After that, he was runner-up to top-notcher Firenze Fire in the Grade 3 Runhappy at Belmont Park and third to Grade 1 winner Yaupon in a stakes at Pimlico in July.

On that form he’s a shoo-in here, except that his total eclipse in an allowance at Parx Racing last time, probably the worst run of his life, raises a few doubts.

Fellow joint-topweight Sir Alfred James rebounds just 11 days after going gate-to-wire in an allowance optional claimer over seven furlongs at Churchill Downs. The five-year-old is multiple stakes-placed and was fifth in the Grade 2 Phoenix at Keeneland last month, and if he’s good to go again after such a short layoff will be a danger to all.

Only bad luck may have stopped Rough Entry coming here looking for a seventh straight win, as after five scores in claiming grade at Gulfstream Park he went to Churchill Downs for his stakes debut only to be tripped up by a fallen rival in the early stages. If his confidence is okay he would be of interest despite the step up in grade.

Wendell Fong probably needed the outing last time when disappointing in the Grade 3 Bold Ruler at Belmont Park following almost eight months off the track. His earlier effort behind Chateau in the Grade 3 Tom Fool over course and distance gives him claims, while Hopeful Treasure comes here in good order after getting the job done in an allowance at Parx Racing, although he has yet to show he’s capable of the leap into stakes company.

On his two-year-old form Green Light Go would be odds-on to win this, with his victory in the Grade 2 Saratoga Special and runner-up spot behind Tiz The Law in the Grade 1 Champagne at Belmont Park. Two years later, he isn’t the same horse, and he was well beaten in Grade 3 company on his last two starts.

Bottom-weight Smooth B ran well when runner-up in a stakes at Parx Racing two starts ago, but he is inconsistent and failed to fire on turf at Laurel Park last time out. This level could be above his head, which also goes for War Tocsin, who is only three-for-34 lifetime and zero-for-six in stakes, and whose fourth place in the Grade 3 Frank DeFrancis Memorial Dash at Laurel Park two starts ago doesn’t encourage overmuch.

Aqueduct is a second home for CHATEAU, who has a 50 percent record at the Big A and can improve on it as long as he rebounds from a lacklustre effort last time out.