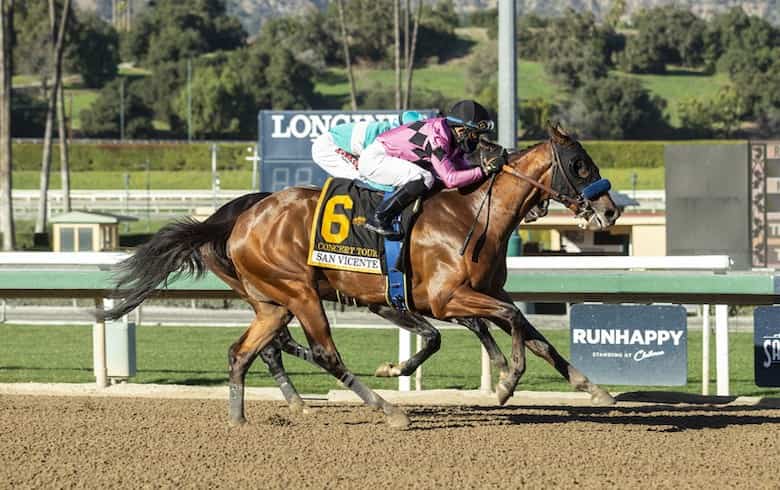 Saturday’s $200,000 San Vicente Stakes (G2) was a highly anticipated race given its position as a lead-up race on the Triple Crown trail. The event saw Gary and Mary West’s homebred runner Concert Tour overcome stablemate Freedom Fighter in the stretch.

Both racehorses are trained by Hall of Famer Bob Baffert, and Concert Tour was able to pull ahead a half-length under jockey Joel Rosario.

The San Vicente gave Concert Tour his second victory in two starts. The 3-year-old Street Sense colt was coming off a Jan. 15 debut victory at Santa Anita. The runner wore blinkers in both of the outings.

“Freedom Fighter just broke like a rocket ship; he’s really fast and been doing really well. Rosario was trying to teach this horse how to rate a little bit, and I thought they were going to get into a speed duel,” Baffert said.

“I think it was a good race for both of them. I learned a lot about (Concert Tour), how he wants to run, and maybe he doesn’t need blinkers. He’s pretty sharp. That’s why we have these races. Now they go to where I can stretch them out. This horse has two races under his belt, but those were two really good horses.

“I think the timing is perfect for (them). I think from here you can take that big jump that you want to take. He’s going to have to really step it up now, but now he’s ready for it.”

In 2020, Baffert won that year’s edition of the San Vicente with Nadal, who was also guided by Joel Rosario. In 2019, Rosario was aboard Sparky Ville to win, giving him his fourth San Vicente victory. Baffert has won it a total of 11 times.

Rider Drayden Van Dyke guided Freedom Fighter in this year’s edition of the San Vicente, setting fractions of :23.41 and :45.98 through a half-mile.

The Chosen Vron sat in second early on, with Concert Tour moving into the third spot as Rosario led him three-wide around the turn, and he made it up to second in the stretch. Concert Tour kept pushing, but Freedom Fighter was not letting up easily.

Concert Tour eventually made it up and passed Freedom Fighter, registering 1:24.06 on the fast track.

“It was a good trip,” Rosario said. “After the other horse went to the lead, I thought the 2 horse (The Chosen Vron) was going to go faster, but he took his time, and I thought I was in a good spot.

“He was a little green, and he cut away a little bit at the last part when I took the lead. I thought that was a good race.”

Concert Tour crossed the line first as the heavy favorite, followed by Freedom Fighter, who finished 2 3/4 lengths ahead of The Chosen Vron in third. The rest of the field followed with Found My Ball and Uncle Boogie.

Mr. Impossible was a scratch before the race. The runner’s only start was a second-place finish to Concert Tour, and he will now run in a maiden special weight race on Feb. 7.

Be sure to check Horse Racing Tote for all the latest news on the Kentucky Derby Prep Races and odds; weekend graded stakes recap and results; as well as up to the minute reports on the road to the Kentucky Derby.