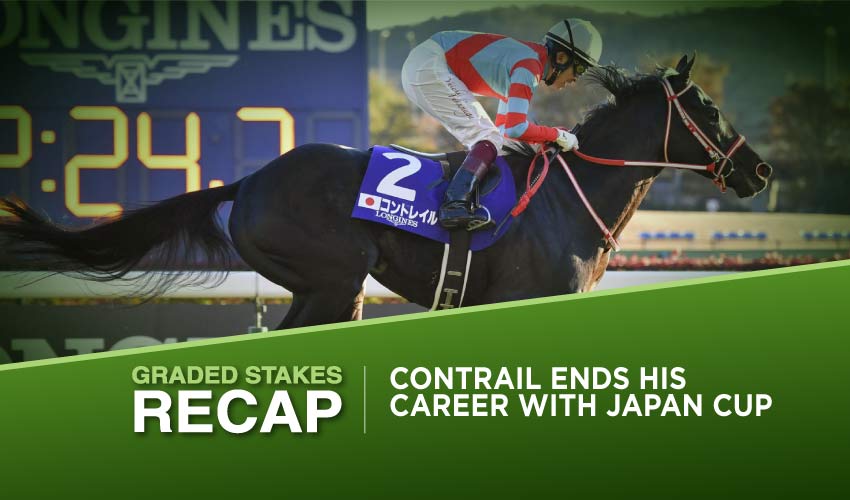 Sunday’s card at the Tokyo Racecourse drew attention from fans worldwide as the prestigious and treasured Japan Cup saw the final start of their local star – four-year-old Contrail, who bowed out with a victory. His last and quite poignant success before going to stud was best summed up by the race commentator: “Goodbye, son. Well done!”

Hanshin Racecourse offered some interesting Japanese races, including a couple of G3 events at the Hanshin Racecourse. Both of the turf races had in common the fact that the subsequent winners were quite unexpected; moreover, both of them managed to score when rallying from the rear of the field to seize the victory after a properly timed finish. At first, Justin Rock scored among two-year-olds in the Kyoto Nisai Stakes, upon which Eighteen Girl won a sprint called Keihan Hai.

The first of the Grade races at the Hanshin Racecourse was meant for two-year-olds horses, and as it’s pretty standard among youngsters, the preferred participants didn’t fire in this G3 turf event and opened the doors for their less anticipated rivals. In the 63,110,000 Yen race held at the distance of a mile and a quarter, it was Fidele (13-5) who took command from the beginning, while the rear was occupied by Justin Rock (81-10), a winner of a maiden. Kohei Matsuyama let the colt trained by Tatsuya Yoshioha rest in the first half of the rest.

He asked Justin Rock to improve his position on the outside, and even though he turned home very wide, the junior managed to transform the third outing of his career into a tight victory. In the final stretch, Fidele was still leading the pack and trying to hold off finishing outside Be Astonished (70-1), who Justin Rock joined subsequently, and both strived to run the leader down. In the end, both of them succeeded as Justin Rock charged for the front and scored his first Grade win in 2m 3.30s, beating second Be Astonished by a half of a length.

Fidele comfortably maintained third place, being the only preferred participants to earn some money as favourite Today Is The Day (11-5) was sixth and considered Candescent (49-10) 9th, leaving behind only one rival.

Sunday’s G3 held at the Hanshin Racecourse was open to three-year-old and older horses who clashed at the distance of 6 furlongs. Like in the previous race, this turf event with the purse of 75,430,000 Yen resulted in a surprising victory when rallying from the rear of the field – this time of five-year-old mare Eighteen Girl (215-10). The charge of Yuji Iida stumbled a bit from the gate, so Shinichiro Akiyama aboard let the bay settle at the back of the field and relied on his mount’s lethal finish that should’ve occurred in the final stretch, which, indeed, happened.

Eighteen Girl turned home as one but last, however, she had free space ahead of her in the middle of the track; therefore, she unfolded an eye-catching finish, started passing by her rivals, and when she also left the leader behind, she just crossed the line with a length advantage. Storming home in 1m 8.80s, Eighteen Girl recorded the second G3 win of her career with Taisei Vision (39-10) following her across the line in second. The four-year-old colt also rallied from behind and managed to snatch at least second place ahead of First Force (134-10).

Preferred participants failed to impress as favourite Shivaji (6-4) was sixth, while the second chance, Lei Halia (18-5), faltered to the last place.

One of the most prestigious and beloved races in Japan was held at the distance of a mile and a half, while the purse of 575,460,000 Yen attracted a field of 18 three-year-old and older horses. The favourite is the G1 turf event was crystal clear – four-year-old Contrail (3-5), who was capable of bringing some joy to horse racing fans around the world, especially in these dire times.

In 2020, the Deep Impact colt achieved the Japanese Triple Crown and ran a gallant second in the Japan Cup, and despite the fact he didn’t win in the only two 2021 outings, Contrail was simply expected to bow out with a bang on Sunday. The reason was simple as he was undoubtedly the classiest horse in the field, which, in the end, showed and Contrail signed off his career with easy success. The dark bay spent the race in the midfield, yet Yuichi Fukunaga urged him to improve his position about the right time, upon which Contrail turned home with plenty of space in front of him. Although he squeezed Shahryar (27-10) in the final stretch, he rallied home surely, past leading Authority (61-10), and crossed the wire in 2m 24.70s.

Contrail seized his fifth G1 victory by 2 lengths to Authority, piloted by Christopher Lemaire, who sent his mount to the front at the beginning of the final stretch. Finishing in second, the four-year-old confirmed to be in fine form after winning the G2 handicap last time out, while third Shahryar also delivered a performance that was expected of him more or less. It’s a question of whether he would’ve finished second hadn’t the rivals squeezed him; however, Contrail wasn’t simply meant to get beaten on his final start.

While Authority is Orfevre’s son, Contrail and Shahryar were both sired by late Deep Impact, who was quite an irreplaceable stallion for Japan; however, Contrail will surely get a significant chance to leave his mark not only on the track by himself but also thanks to his potential offsprings.

Behind the mentioned trio, Sanrei Pocket (70-1) denied the odds and grabbed fourth place in front of the best of European raiders, five-year-old mare Grand Glory (56-1), whose late charge was enough to finish fifth. Neither of Aidan O’Brien’s charges played a huge role in the race as Japan (58-1) finished his last race before going to stud in Germany in 8th place, while his stable-mate Broome (28-1) was 11th.