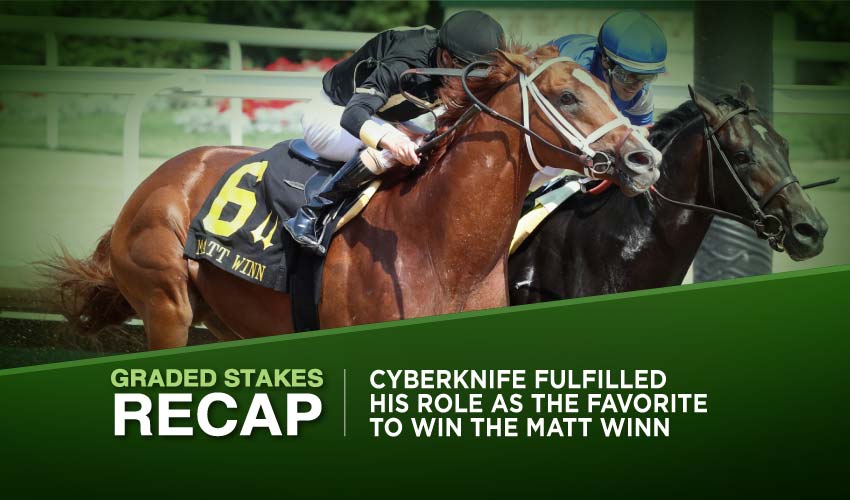 On Sunday, the Churchill Downs Racecourse featured the G3 Matt Winn for three-year-old colts, where Cyberknife made a reappearance after a luckless run in the Kentucky Derby. Although he had to give everything he had, he managed to strike gold in front of Howling Time.

Seven three-year-old colts lined up in this G3 dirt race offering the purse of $225,000. Covering the distance of a mile and a half of a furlong, Howling Time (43-10) set the pace from the beginning and maintained the lead until the final stretch, where favorite Cyberknife (1-2) attacked.

Piloted by Florent Geroux, the chestnut tried hard to better his bravely fighting rival, and in the end, the two of them were almost inseparable. The photo decided that Cyberknife prevailed just by a nose in 1m 41.98s, beating Howling Time as narrowly as possible. Third Rattle N Roll (22-5) didn’t challenge the abovementioned duo in the slightest.

Trained by Brad Cox, Cyberknife has shown some talent by bagging wins in smaller races in late 2021 and early 2022, and then impressively entered the Kentucky Derby picture by scoring the G1 Arkansas Derby. However, his performance in the first leg of the Triple Crown was hampered by the fast pace he was sitting too close to, and therefore, the son of Gun Runner weakened in the final stretch and came home in 18th place.

On Sunday, he attempted to make amends for that effort, but it was far from easy as he bumped into progressive colt Howling Time. Indeed, he failed to impact any Graded races he ran in; still, his most recent Allowance victory was a fine one, so his gutsy effort in the Matt Winn wasn’t that surprising. Moreover, he carried a considerably smaller weight than Cyberknife, who dug deep to fulfil the role of a favorite.

Yet it’s true that only time will tell whether he’ll be able to return among the elite successfully or settle in the G3 or G2 company as he’s never occurred as classy as Epicenter, Mo Donegal, or Zandon to us. Rattle N Roll was once also a Kentucky Derby aspirant, yet since his G1 triumph in 2021, he hasn’t repeated such an act, and his third place on Sunday was more or less the best he can currently do. Outsider Droppin G’s (47-1) ran in fourth, while Camp David (131-10) came home in fifth.

Follow us on Social Media for Matt Winn updates!