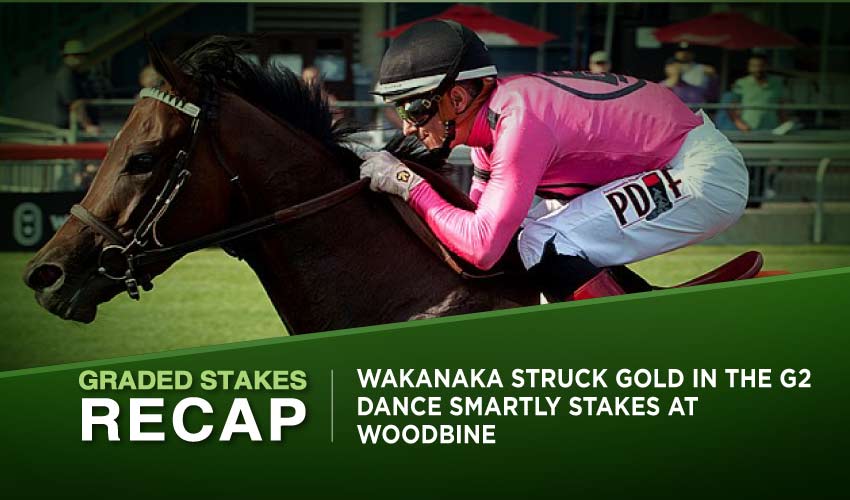 The programme in the Canadian Race Course in Woodbine continued on Sunday with several interesting races, including a couple of Graded events open to three-year-old and older fillies and mares. At first, Hazelbrook caused an upset in the G3 Hendrie Stakes, while in the G2 Dance Smartly Stakes, Wakanaka affirmed to be the best filly in the field by scoring it smoothly for William Mott.

The field of seven three-year-old and older fillies and mares clashed in this G3 $150,000 race on the all-weather surface, while Hazelbrook (26-1) enjoyed such a peaceful ride under Jason Hoyte and caused a huge upset when scoring in 1m 15.68s.

The four-year-old filly covered the distance of six and half a furlong in the rear, then improved her position, and despite running wide in the final turn, she prevailed in the closing stages by a neck. The Lorne Richards trained bay definitely showed lots of courage here when bettering bravely fighting Amalfi Coast (705-100), with La Libertee (83-10) taking third place.

Although the victorious daughter of Bayern belonged among outsiders in her premiere Graded attempts, we saw her most recent Allowance victory as promising, and therefore, she only affirmed her progress in the Hendrie Stakes.

She’s still just a four-year-old and could achieve more Graded glory as when running down Amalfi Coast, Hazelbrook looked like she knew how much she needed to give to triumph, suggesting she had more left in the tank. La Libertee couldn’t catch the duo, but her finish from the rear of the field was quite nice, while heavily fancied Boardroom (2-1) galloped in third but was in trouble in the final turn, upon which she tried to fight, yet didn’t have enough energy to fulfil her role.

After two scratches, six four-year-old fillies lined up in this G2 turf race to compete for the purse of $200,000. It was, indeed, also open to three-year-olds and older, but none of these showed up in the event over the distance of a mile and half a furlong.

Since the beginning, Fev Rover (21-10) was prominent and lost her position only in the final stretch when Wakanaka (13-10) came to the front with a brilliant turn of the foot, thanks to which she took command and cruised home in 1m 39.46s. Under Rafael Hernandez, the little bay filly triumphed by one and ¾ of a length before Fev Rover, who denied third Munnyfor Ro (58-10) by a neck.

Wakanaka struck gold in the G3 Italian Oaks in 2021, while it took just one outing before she started to show her class also in the US. The Irish-bred daughter of Power placed at the G3, G2, and last time out even at the G1 level as she was second in the Just a Game Stakes.

Therefore, her Sunday triumph was expected, and we’re curious about the next steps of this talented William Mott bound filly. Fer Rover was another Irish-bred participant here, and even though she carried less than the favorite, she fought only for the second place in the final stretch as Munnyfor Ro was closing on dangerously. Still, Fev Rover maintained it and looks set to become a consistent Graded performer in the US.