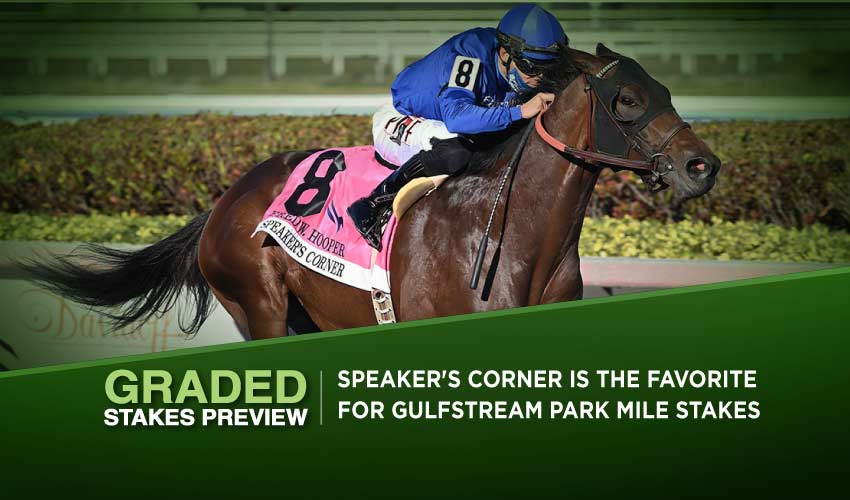 To the former attracted six interesting participants, and basically, any of them could strike gold here and add another treasured victory to the record, while the latter might see Fearless becoming a back-to-back winner here.

The G2 dirt race belongs among the trials for the Kentucky Oaks, and thus it offers 50 points towards the Road to the Kentucky Oaks for the winning three-year-old filly. The purse of $200,000 attracted seven of them; however, it looks that just one would actually cause an upset on the distance of a mile.

Half a dozen fillies have managed to catch the eye thanks to their performances, and it’s difficult to pinpoint the one who should prevail on Saturday, but due to her G3 victory, Girl With a Dream could keep the role of a favourite until the start.

The daughter of Practical Joke has six outings under her belt, including an eighth place in the G1 Spinaway Stakes, though she moved away from the debacle to score a black-type race in December. Subsequently, Brad Cox aimed her at the G3 Forward Gal Stakes over seven furlongs where Girl With a Dream broke away quickly, set the pace, and held off a rival to secure her premiere Graded triumph.

Tough to say how good she really is, but currently, she seems to be a fine filly that should earn some points at the Gulfstream Park, but the same could be said about Classy Edition, the daughter of quirky yet talented Classic Empire. Todd Pletcher’s trainee has run three times and amassed three victories, including two black-type wins, recorded thanks to a brilliant turn-of-foot.

Last time out, Classy Edition had the worst start of all the participants; still, she quickly recovered, made her move on the outside, and showed off her class in the final stretch. Despite having a terrible run, she won easily and definitely suggested her considerable potential. Going for the mile should suit her, while we’re not so sure about Girl With a Dream.

Outfoxed is another contestant with black-type exploits to her, winning two of them in 2021 and one in January 2022, even though she carried the biggest weight. At first, it looked like she had to work hard to get into contention in the final stretch, but when she was crossing the wire, it seemed she had everything under control.

We’ll see whether she’s classy enough to run down the mentioned duo, while Kathleen O. could also play a significant role here after winning both of her outings. After scoring her debut, she was pointed into a black-type company, among which she thrived, winning the mile long-event by eight lengths. Back then, she was in a league of her own as the jockey didn’t have to squeeze her at all. Cocktail Moments and Sweet Dani Girl are fine fillies, too; however, they are more likely to snatch a place than the victory here.

Our betting pick for the Davona Dale Stakes:

Is Kathleen O., who might not look that classy at first sight, but her black-type victory was so impressive she shouldn’t be discarded in this race.

Another G2 of the card welcomes a field of nine four-year-old and older horses, clashing at the distance of a mile. The $200,000 dirt event has its favourite in last year’s winner, six-year-old Fearless (), who scored the race comfortably before finishing second in another G2 and gathering three places at the G3 stage.

The Todd Pletcher bound gelding is a reliable specimen as he’s been losing his races only due to the carried weight, and even though he’s about to be disadvantaged to some of his rivals once again, his main opponents don’t belong among them. Fearless has a run in 2022 under his belt, he likes the track, and the distance, so he’s definitely a victory candidate here alongside Speaker’s Corner, trained by William Mott.

The four-year-old colt is a progressive one as he bagged two Allowance races in 2021 and concluded the season with a second place among Listed horses; while starting the season 2022, he won the G3 Fred W. Hooper Stakes by one and ¼ of a length in front of Fearless.

This duo was the best in the race by far, and as Speaker’s Corner had a considerable weight advantage over his opponent, which he’ll lose on Saturday, there’s a big chance Fearless will turn the tables on Speaker’s Corner.

However, it doesn’t have to be like this, given the colt has run only seven times, and he mightn’t have shown us everything he’s capable of. Something similar could be applied to four-year-old Injunction who’s been out five times in 2021, winning easily an Allowance race last time out.

Then there’s a trio of contestants with quite well-known names, yet their chances are limited on Saturday. Endorsed run in the G1 Pegasus World Cup in January, where he took fourth place; however, he had no chance with the rivals who bettered him.

Ny Traffic finished second in the G1 Haskell Stakes in 2020 but failed to settle among the elite subsequently, while in 2021, his best results occurred in G3 and black-type races. Because he demolished the field in October’s black-type sprint race, one might still hope he can get in touch with Saturday’s competition, but he hasn’t been out since and needs to improve once more to have a say here.

The last to mention is seven-year-old Diamond Oops, a G2 winner specialized in sprints, so aiming at the mile could seem reasonable due to his age, but his form doesn’t look appealing right now.

Our top pick for the Gulfstream Park Mile Stakes is Fearless to score the race for the second time in a row.