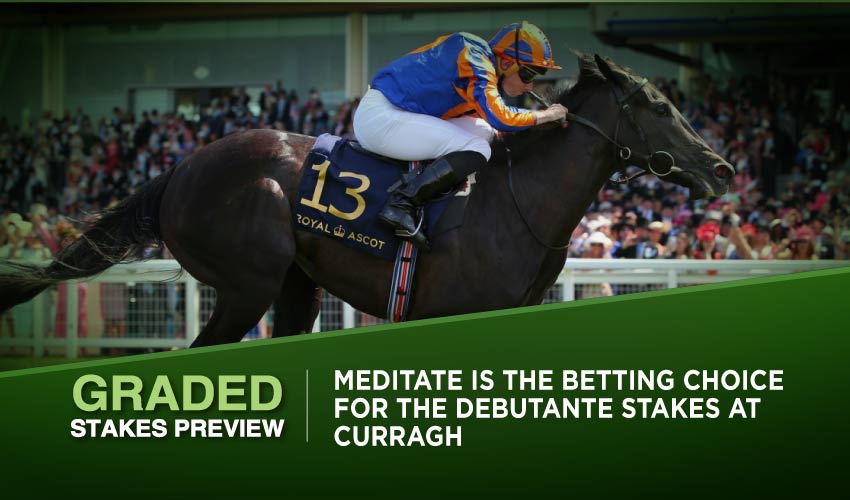 On Saturday, two G2 races for two-year-olds will take place at the Curragh Race Course in Ireland. Both events attracted fields of seven participants who will hit the distance of seven furlongs on the turf surface, while Aidan O’Brien’s Aesop’s Fables looks like the favorite of the Futurity Stakes. Proud And Regal could be a big rival here; however, Aidan O’Brien also has a solid chance in the G2 Debutante Stakes for fillies as Meditate will attempt to add another Graded victory to her resume.

Seven two-year-olds will clash in this G2 turf race, offering the purse of €120,000. The contestants will cover the distance of seven furlongs, with Aidan O’Brien having two quite smart runners in the field.

The first to mention is Aesop’s Fables, a No Nay Never colt who has hit the track once. It was a victorious attempt as the bay comfortably scored over five and a half furlongs in Navan. After tracking the leaders, Aesop’s Fables took command and easily drew clear from his rivals.

Of course, one successful run doesn’t make the horse a star; however, Aidan O’Brien’s juniors should always be respected; moreover, when that particular two-year-old is by No Nay Never, a brilliant sire of youngsters, and out of Graded performers producing mare. Hans Anderson will accompany his stable mate in the Futurity Stakes, while the son of Frankel shouldn’t be underestimated as well.

The bay started with a second place, upon which he broke his maiden at the Curragh Race Course in the race over seven furlongs. The first offspring of a Listed winning mother delivered by one and ¾ of lengths, bagging it from the front. His effort was quite eye-catching, and more or less, he’s the second chance of Aidan O’Brien also because Ryan Moore picked Aesop’s Fables, suggesting who’s probably the better colt.

To stay in the family of O’Brien, the Donnacha O’Brien trained Proud and Regal should be the main threat to the favorite. The Galileo colt has already achieved a Graded triumph as, after prevailing in his debut, the chestnut junior showed off in the G3 Tyros Stakes at Leopardstown.

Back then, Proud and Regal delivered from the front and because he’s also a son of black-type horses producing mare, the colt should be respected. Aidan O’Brien’s other son, Joseph O’Brien, sends in a couple of two-year-olds, especially Lakota Seven.

The bay colt has run three times. At first, the Sioux Nation’s offspring finished second in his debut, then scored among maidens, and finally, he took second place at the G3 stage. Still, its winner, Hellsing, Proud and Regal has already beaten at that stage.

Apache Outlaw is also a maiden winner who grabbed third place at the G2 stage; however, he was last of all in the G1 Phoenix Stakes. Young Ireland and Semblance of Order complete the field of seven.

Our pick for the Futurity Stakes is PROUD AND REGAL. Aesop’s Fables could be classier in the long run; however, he might be too green to actually strike gold in the Graded company right now, while Proud And Regal is way more mature at this stage.

The second turf G2 of the day is open to two-year-old fillies who are about to cover the distance of seven furlongs. The purse of €120,000 attracted seven juniors, among whom Meditate is the most interesting.

The daughter of No Nay Never has three outings under her belt, all of which are victorious. The chestnut filly was impressive in her debut at the Curragh Race Course in April, upon which she scored a G3 race in Naas and continued her successful streak in June by bagging the G3 Albany Stakes during the Royal Ascot meeting. She, indeed, has superb credentials for the Debutante Stakes, and even though she’s yet to hit the seven furlongs-long trip, Meditate should handle it according to her pedigree.

It wouldn’t be Aidan O’Brien if he didn’t send another filly to a G3 event for two-year-olds, and besides Meditate, he relies on Maybe Just Maybe, a Japan-born bay sired by Lord Kanaloa. The close relative to the G1 winner Maybe has recorded two outings – the last place in her debut and victory in her second start when she prevailed over seven furlongs.

The bay with an elusive pedigree (at least in Europe) doesn’t look like the most serious threat for the favorite, though, as such a position belongs with Zoinnocent, trained by Joseph O’Brien.

The daughter of Zoffany has hit the track three times, and even though her debut didn’t result in anything spectacular, she bagged a win in her second outing among maidens. In July, Zoinnocent showed up among G3 contenders in the Silver Flash Stakes in Leopardstown, where she snatched up a solid second place.

If she gives a similar effort on Saturday, she could repeat the place here. Joseph O’Brien has also Thornbrook in the race. The Saxon Warrior offspring has recorded a single start in July by scoring a seven furlong-long maiden, while she must’ve shown enough courage to overcome some bumps and collisions on the way.

Olivia Maralda has attempted to succeed at the Graded stage and finished seventh in the G2 Queen Mary Stakes, which might seem like a failure, but the field was quite big back then, comprising 21 participants. Because Olivia Maralda subsequently destroyed a maiden competition in Newbury, she earns some respect also in the Debutante Stakes. Gan Teorainn and With Love complete the field.

Our pick for the Debutante Stakes is MEDITATE, who has shown some tremendous talent and should be able to step up her game on Saturday to enjoy her premiere G2 triumph. Still, fillies like Thornbrook and Olivia Maralda could be good enough to pose a danger for Meditate.