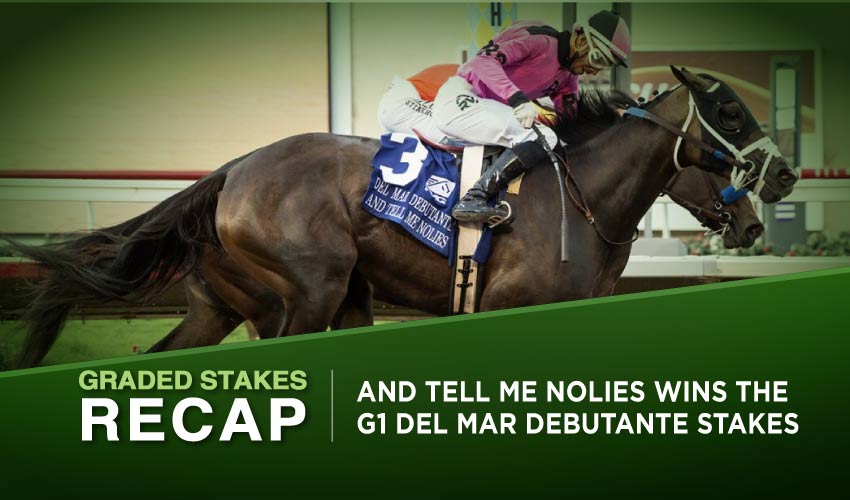 With no regard for history or the tote board, And Tell Me Nolies finished her race off like a whirlwind to snatch the Del Mar Debutante, the feature event at the oceanside track on Saturday, from the grasp of odds-on favourite Home Cooking.

The well-hyped Home Cooking, whose trainer Bob Baffert has won this race a record ten times, was sent to the lead before halfway and held a three-length advantage at the eighth pole. She looked home for the money, but got weary late and 9-1 chance And Tell Me Nolies ran her down to lead on the line, the official margin a head. The maiden Ice Dancing was three and three-quarter lengths back in third; the time was 1:23 and one-fifth.

“I knew I was the winner at the wire,” said jockey Ramon Vazquez, for whom this was a first success at G1 level in the US. “I was waiting and waiting for a gap to open, and when it did she responded well.”

And Tell Me Nolies, a daughter of the mighty Arrogate trained by Peter Miller, is now two-for-three after breaking her maiden at Del Mar last month. With one G1 in the bag, her short-term future is likely to involve another in the Breeders’ Cup Juvenile Fillies at Keeneland on November 4.

When a race is perceived as being all about two horses, a third often muscles in to upset the party, and so it was in the John C Mabee as 10-1 shot Avenue De France ran the race of her life to seal her first Graded-stakes success.

Before the race all the talk was of barnmates Going Global and Going To Vegas, victory for one or the other seemingly a formality, but Avenue De France changed the conversation with a sweeping move that took her to the lead approaching the turn. The 1-2 favourite Going Global chased hard down the lane but was a half-length short as the camera clicked, the winner stopping the clock in a tick under 1:48. The 2021 winner Going To Vegas was third, two and a half lengths back.

“She wanted to run, so I took the opportunity to make my move early,” said meet-leading jockey Juan Hernandez. “You can do that with a good filly and she held on well.”

On her previous outing the Leonard Powell-trained Avenue De France – who began her career, aptly, in France – had finished three lengths behind Going Global in the G2 Yellow Ribbon, but the enterprise of Hernandez made the difference here.